A UMD professor won a national award for her cholera research 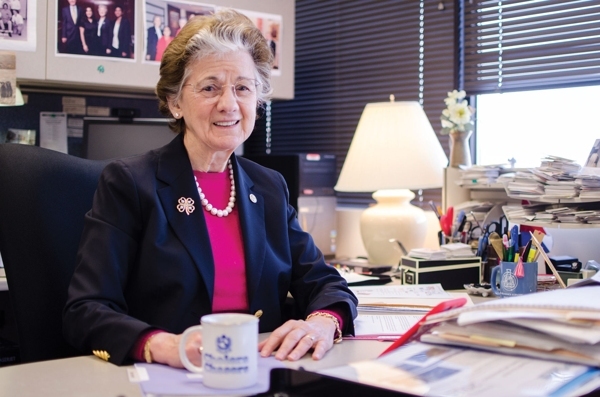 A distinguished University of Maryland professor will receive the Vannevar Bush Award, which honors those who have made significant contributions to science and technology, for her research on marine microbiology.

On May 9, the National Science Board will recognize Rita Colwell for her life-saving research of cholera, which has helped reduce the spread of the disease.

Colwell said she was delighted and surprised to receive the award. She didn’t even know she was nominated until she got a call from the NSB telling her she won, she said.

“I’ve always been interested in public health, and being of service, being able to provide a benefit to society, so I’ve been very, very lucky in being able to do just that,” she said.

During that time, she became an expert in Vibrio cholerae, the bacteria that causes cholera, an acute diarrhoeal disease that can kill within hours if left untreated, according to the World Health Organization. As a graduate student, Colwell developed a computer program that identifies and analyzes data from bacteria by looking at its genetic information, rather than growing cultures and physical traits, which she said was a “totally novel” idea at the time. This paved the way for bioinformatics, the use of computers to study biology.

“I ended up probably saving more lives through my research than I would have done had I become a physician,” Colwell said.

Colwell joined this university as a tenured professor in 1972 and helped establish this university’s biotechnology institute in 1985, which she called “great fun.”

During the 1980s, Colwell proved the bacteria causing cholera can enter a dormant state but can still cause the disease, said Anwar Huq, a cell biology and molecular genetics research professor. In 1996, Colwell and Huq published a study that found almost all bacteria causing cholera can be filtered and removed from drinking water with a sari cloth worn by people who live in Bangladesh, Huq said. A National Institutes of Health trial in that country between 1999 and 2002 led to a 50 percent reduction in cholera using this method, he said.

Huq also collaborated with Colwell on a 15-year NIH study ending this month that helps predict where cholera outbreaks will occur, he said. After all the work they have done together, Huq said he was “really proud of being associated with … a true academician and a true scientist.”

Colwell became the first female director of the National Science Foundation in 1998. Under her leadership, the NSF budget increased by 68 percent, due to initiatives such as a program that puts graduate students in K-12 classrooms to spread enthusiasm about science. She returned to this university in 2004, and in 2008, she founded CosmosID, a bioinformatics company developing methods to diagnose and treat illnesses.

Colwell is the fifth woman to receive the Vannevar Bush Axward since it was established in 1980, said Kim Silverman, NSB science policy analyst.

“Hopefully as life continues on in the years ahead, we’ll have more women candidates,” she said.

In some ways, being a woman in science and technology industries has become easier, Colwell said. In medical schools, for example, women sometimes outnumber men. Women made up about 76 percent of healthcare practitioners in 2016, according to the U.S. Bureau of Labor Statistics. But at the same time, women are underrepresented in engineering, physics and chemistry, Colwell said. Computer-based fields were once dominated by women until it became a “negative environment” for women to work in, she said.

Colwell said she will co-author a book with author Sharon McGrayne about womens’ contributions in science throughout history, including her own achievements. Colwell — who has served on trustee boards for several international scientific associations, including currently with the Okinawa Institute and the Science Foundation Ireland Board — became the first woman to win the Stockholm Water Prize in 2010 and was awarded the 2006 National Medal of Science by President Bush.

“The genes for intelligence are not on the Y chromosome,” Colwell said. “If we don’t utilize the intellectual strength of the female half of the population, the country loses economically, socially, and I think even in the matter of defense.”