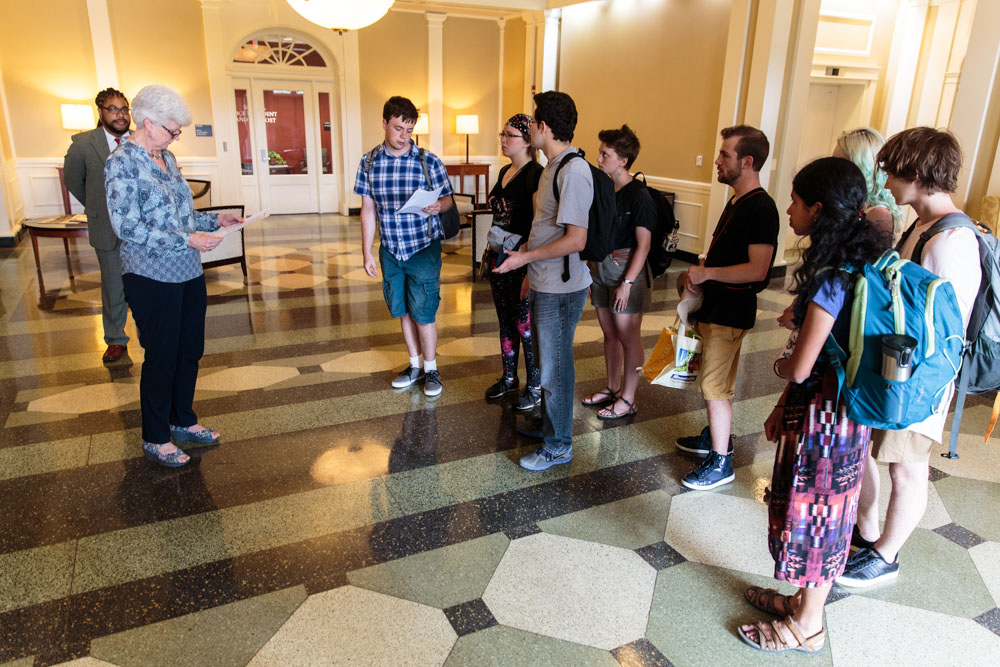 About 12 University of Maryland students rallied and nine presented demands at the administration building Monday to stand in solidarity with immigrants and workers at this university.

The marchers met with this university’s assistant president and chief of staff, Michele Eastman, and read to her their nine demands from a petition.

The student groups garnered 71 signatures for their petition, said Brendan Sullivan, a sophomore civil engineering major. He previously told The Diamondback that he expected about 200 people to attend Monday, including the involved groups’ members.

“We commend student activism on these issues,” Eastman said. She plans to write a response to the groups, she added.

Students chanted “One struggle, one fight, workers of the world unite,” and “No borders, no nations, stop deportations,” as they marched from Hornbake Plaza to the administration building.

Before the march, student groups set up tables at Hornbake Plaza, including Young Democratic Socialists, Our Revolution, UMD Socialists, the Pride Alliance, Students for Justice in Palestine, Prison Resistance Project and the Student Labor Action Project. The Pride Alliance signed onto the effort Monday, and the Graduate Student Government also took part in the effort but did not have a table set up because of a schedule conflict, Sullivan said. The groups began their rally at 3 p.m.

“We’re here in solidarity with May Day movements across the nation,” Sullivan said. “We’re here in order to support a living wage on campus, getting students the right to organize, expanding the Maryland DREAM Act, protecting undocumented immigrants, and calling for divestment from Maryland Correctional Enterprises.”

Sullivan said although the group expected to have 50 to 100 students in attendance, low turnout could have been caused by students restricted by their class schedules or who were attending other May Day events in Washington.

Tens of thousands of protesters and marchers were expected Monday in May Day protests across the United States, which organizers describe as “a surge in energy against the president and his administration’s policies,” NBC News reported.

Cydnee Jordan, a freshman government and politics and public policy major, visited the UMD Socialists’ table before the march. Jordan said the group’s acknowledgment of immigrant and workers’ rights is a testament to what this university’s community values.

“Even if no one shows up to the rally, the point is that we’re having this rally because it’s something that’s important — immigrant rights, workers’ rights — they’re all entangled in some sort of way,” Jordan said.

Jordan and other students who visited the UMD Socialists table voiced support for the demand to designate this university a sanctuary campus.

“ICE has a lot of power right now, especially in the current administration,” Jordan said. “They might gain even more power as time goes on and I think that’s a slippery slope. … Trying to cut it off here at our university would be a good step forward.”

In November, ProtectUMD, a coalition of 25 student organizations, sent a letter to administrators outlining 64 demands for new programs, resources and initiatives to serve marginalized student populations. After reviewing those demands, Loh wrote in a campus-wide email on Jan. 26 that designating this university as a sanctuary campus is “unnecessary.”

Although this university is not labeled a sanctuary campus, Prince George’s County has protocols to protect undocumented immigrants from federal authorities.

Another demand the student groups presented stated “all workers at UMD, including graduate students, and student workers should have the right to form a union with collective bargaining rights.”

Maryland state Del. Marc Korman (D-Montgomery) introduced a bill that called for student workers in the University System of Maryland to have the right to collectively bargain. It failed to move out of committee in March.

“I work at the co-op, which is worker owned, so we do set our own wages,” said Shreya Anand, a junior astronomy and physics major who joined the march. “We’re [still] not unionized, so one thing I’m interested in is building a network of all the workers in Stamp, so we can campaign for minimum wage [and] labor rights.”

Another demand is for this university to divest from Maryland Correctional Enterprises.

A state statute requires the University System of Maryland to purchase furniture from MCE or other state socioeconomic preference programs.

“The University of Maryland can’t make a campus-wide decision to completely end business with MCE because of the state mandate,” said Nathan Brandli, an alumnus of this university and coordinator for the Prison Resistance Project. “But it’s very important the … administration releases a statement and do everything they can to verbally speak out against Maryland Correctional Enterprises … and to make a public commitment to divesting when given the option.”

After meeting with Eastman, Shane James, a senior history major and representative of Students for Justice in Palestine, expressed his frustration.

Although Eastman said this university didn’t receive many emails about its work with MCE, James said last semester almost 1,000 students backed a set of demands, which included divestment from MCE.

“[This university doesn’t] really care too much when we raise demands and drop off petitions,” James said. “I mean they’ll respond to it, but when they can, they try to ignore it.”