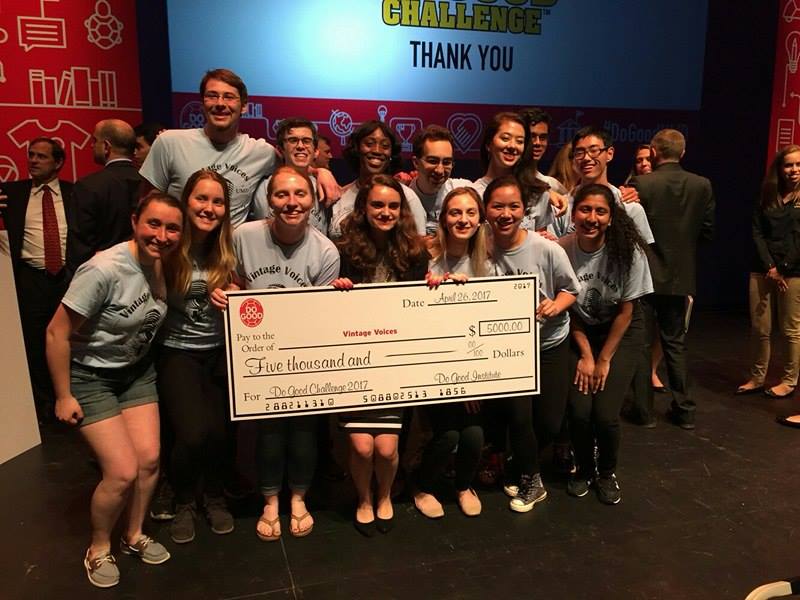 Vintage Voices and the James Hollister Wellness Foundation each won the $5,000 grand prize at the culmination of the annual Do Good Challenge on Wednesday night at the Clarice Smith Performing Arts Center.

The challenge awarded more than $20,000 to seven student teams, with second and third place winners receiving $2,500 and $1,000 respectively.

Students could enter the challenge through two different categories: projects or ventures. Projects include volunteering, fundraising or spreading awareness for a cause or organization, and ventures include expanding a student-founded and student-run organization.

Becky Goodridge, a junior hearing and speech and psychology major, said Vintage Voices, which provides iPods to residents at local senior community homes, will use the $5,000 from winning the projects category to expand its efforts.

Members of the group have gone to seven different homes, where they sing, give residents iPods to listen to music and develop relationships with them.

Vintage Voices plans to sponsor some senior homes to become Music and Memory certified, which means they can create programs to provide residents with iPods and train caregivers to create personalized playlists for residents. The goal of these programs is to offer music as a therapeutic form of care.

Studies have shown music can be beneficial for the elderly, because it can help ease symptoms of Alzheimer’s disease, depression and anxiety, Goodridge said. Music can also encourage them to be more active, she added.

“I love it when the residents dance and move along to the music,” Goodridge said. “Residents who can’t necessarily get up afterwards, they tell us, ‘This just made my day,’ or ‘This just got me out of a bad time.'”

Named after Hollister’s father, who died from brain cancer, the foundation aims to save valuable and usable medications from being destroyed. Brugnerotto said $5 billion worth of usable drugs are wasted every year after people with terminal diseases die and their leftover medication is thrown away.

Hollister and Brugnerotto want to recover these medications and donate them to countries that do not have enough medicine for serious illnesses like cancer. To do this, they would test the viability of the drugs to make sure they still meet FDA standards, then relabel the expiration date on the medication and donate it.

Brugnerotto and Hollister addressed that there are possible legal issues with this idea, but said they have talked with the science director of the FDA and with lawyers to discuss how they can implement their plan.

For now, they plan to invest the $5,000 in five fundraisers to expand efforts to help those in need. They held a fundraising event in January that rose $10,000, which they used to send medicine and medical supplies to medical missions teams in Honduras, Ghana and Bolivia. Hollister estimates by this summer, they will have helped more 11,000 people.

“It’s gonna take us a while to hash out some policy issues with the FDA, but that isn’t going to stop us from doing good in the here and now,” Hollister said.

Brugnerotto said he was “stoked” they won first place after the duo only made it to the semi-finals last year.

“A lot of hard work and perseverance does actually work out occasionally, even if you don’t think it will,” Brugnerotto said.

For the venture category, Symbiont Health, which designed a wearable device for senior citizens that automatically alerts family members if they fall, placed second, and Kodactive, which created an educational platform for children to learn coding, placed third.

The James Hollister Wellness Foundation and Symbiont Health also received an additional $1,500 each after the audience favorite category ended in a tie.

The judges were impressed with all the teams who presented. Kirsten Craft, the program manager of the business school’s Center for Social Value Creation, said it was a challenge to be a judge.

“All of our teams were really competitive and it was really exciting to see what they could bring to the table,” Craft said. “The Do Good Challenge is a great opportunity for students to push themselves, identify a cause they care about and really think through what it means to care about that cause and take action on it.”