MilkBoy ArtHouse restaurant will open on May 2 in College Park 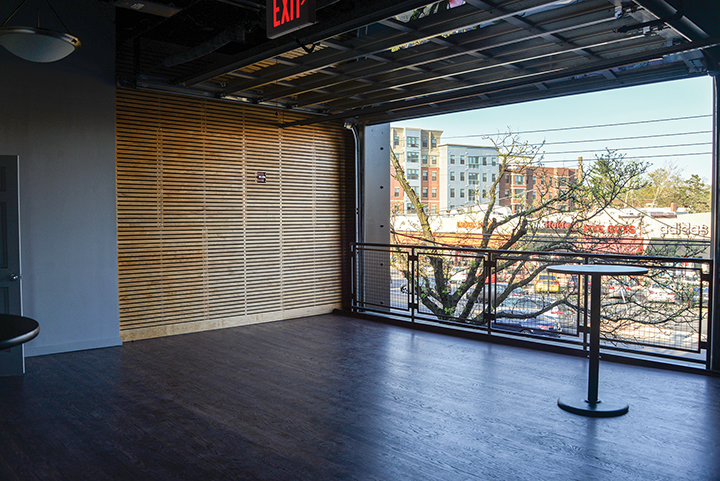 Milkboy Bar and Venue on Route One.

After more than a year of construction, MilkBoy ArtHouse, a restaurant and performing arts venue, will officially open on May 2.

The two-story building, which formerly housed The Barking Dog bar, will feature multiple bars, restaurant areas with seating and two stages for artists to perform. The development is a collaboration between MilkBoy, a Philadelphia-based music and entertainment company, and the University of Maryland’s Clarice Smith Performing Arts Center.

“We want to be the anchor here,” said Bill Hanson, co-owner of MilkBoy. “When families come to the University of Maryland, we want the parents to enjoy it too. We want them to think this a cool town, and say it must be cool if something like this is here.”

The space is opening in two phases, as The Clarice will not begin scheduled performances at the venue until September, said Erica Bondarev Rapach, the associate executive director of The Clarice, though people should stay tuned because there could be some opportunities for pop-up shows over the summer, she added.

[Read more: Take a tour of the ArtHouse before it opens on Route 1 next semester]

“It’s very much a space intended for a broad group of people [and] that meets a void,” Bondarev Rapach said. “There’s not really a space that’s designed to be that way in College Park. We imagine that there’s something here for everyone.”

The restaurant, which is primarily staffed by students, will feature “elevated and inspired American food,” Hanson said, offering locally grown vegetables for salad options. The menu’s prices range from $5 to $18, Hanson said. “We want to be accessible to the entire community, we’re not trying to exclude people or price people out.”

The Clarice will announce its 2017-18 season on May 23, and a portion of the shows will be hosted at MilkBoy, Bondarev Rapach said. A number of student organizations such as SEE, WMUC and Terrapin Beats Society, are collaborating with The Clarice to co-produce events. MilkBoy will also schedule bands and other performers in the space.

Performances in the space will be ticketed, Hanson said, though they have not determined a specific price range.

This development signifies College Park is on the right track, said Ken Ulman, the chief economic strategy officer for the university’s College Park Foundation. The foundation played an integral role in developing this project, and Ulman said this project signifies how far this city has come.

“I was talking to someone who just visited Berkeley … and it made me think how far we’ve come,” Ulman said. “We’re introducing a new performance space where the community … can come together and enjoy performing arts in an accessible location that will help bring [these people] together.”

Hanson also said he wants this space to appeal to a wide audience, attracting students, College Park residents and people from neighboring towns.

[Read more: The future MilkBoy+ArtHouse venue on Route 1 is one step closer to a liquor license]

“We hope that it will keep people here so they don’t have to go to D.C. on the weekends or Baltimore,” Hanson said. “When people come back years from now we want them to say, ‘Of course we gotta go to MilkBoy ArtHouse.'”

In addition to this university, the College Park Foundation and various community partners, U3 Advisors, a consulting agency that provides real estate and economic solutions, was instrumental in bringing MilkBoy to College Park, Ulman said.

“Great cities are not made of few large projects but of many unique smaller projects. We believe Milkboy will be just that,” Omar Blaik, U3 Advisors’ CEO, wrote in an email.

But despite the excitement of various community officials, students like junior Christopher Bambic, a physics and astronomy major, said he hadn’t heard of the development, but after hearing more about its concept, he liked the idea.

“That would be a fun night,” Bambic said. “I think it would be a nice change, [and] it would be a good way to bring the culture of the university out to the College Park community.”

Senior journalism major Gaby Galvin also said she had not heard much about this project, just murmurs from friends over the past few months.

“I think it’s interesting because we don’t have a lot like that,” Galvin said. “We have a lot of chains and we don’t have too many smaller venues or artsy things on Route 1. So I’ll be interested to see how it turns out [and] if it’s successful.”