Review: Letterman biography highlights both his genius and his writers’ talent 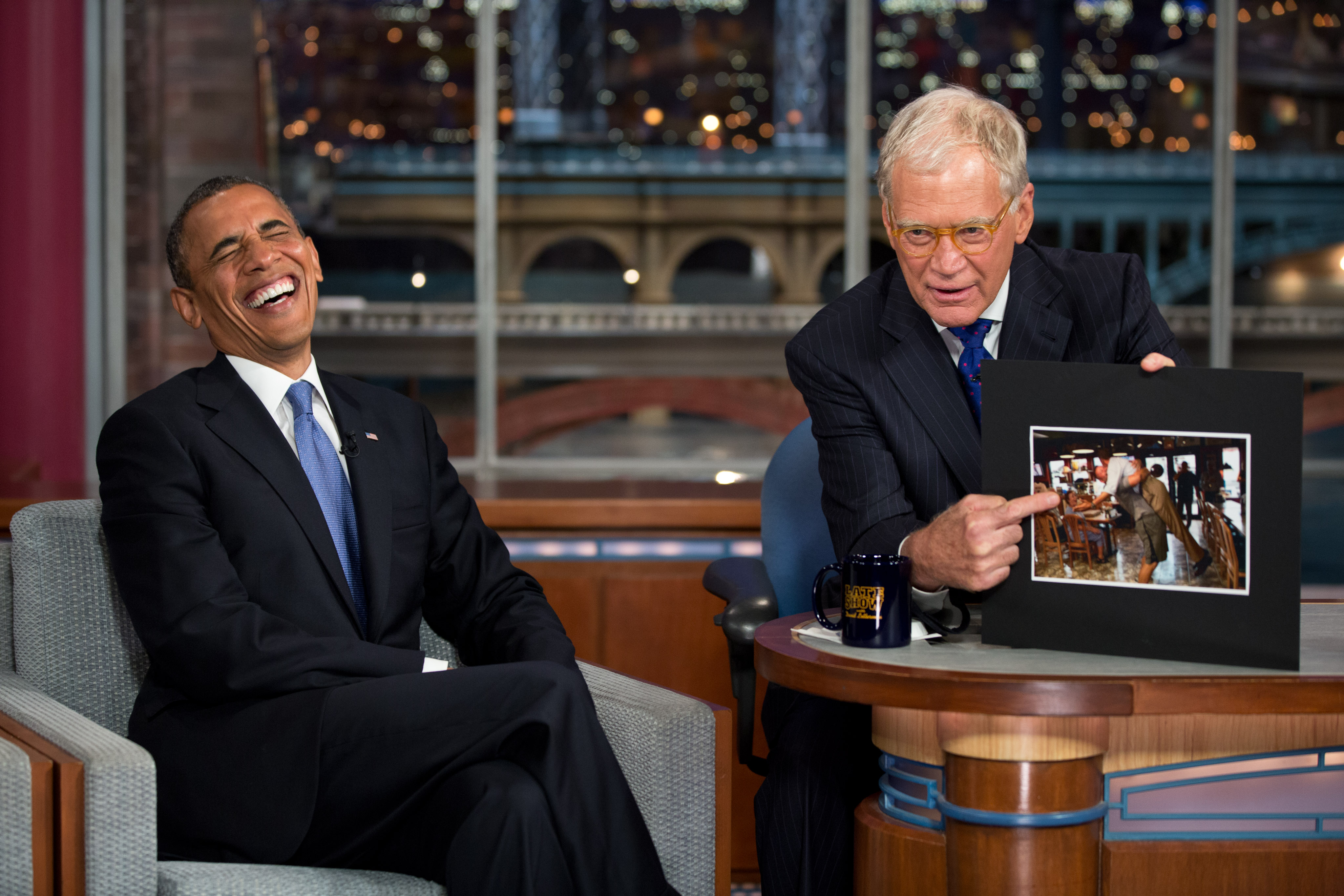 President Barack Obama reacts to a photograph during an interview with David Letterman during a taping of the "Late Show with David Letterman" at the Ed Sullivan Theater in New York, N.Y., Sept. 18, 2012. (Official White House Photo by Pete Souza) This official White House photograph is being made available only for publication by news organizations and/or for personal use printing by the subject(s) of the photograph. The photograph may not be manipulated in any way and may not be used in commercial or political materials, advertisements, emails, products, promotions that in any way suggests approval or endorsement of the President, the First Family, or the White House.Ê

The cover of Letterman: The Last Giant of Late Night, as you might predict, is a photo of David Letterman, giant typeface broadcasting his name. And rightfully so — over the course of more than 30 years, Letterman redefined what it meant to be a late-night television host.

But it’s a testament to author Jason Zinoman that readers will walk away from reading Letterman: The Last Giant of Late Night with appreciation for Letterman’s genius, yes, but also equal admiration for his writing staff’s talent and dedication.

A midwesterner with a snarky, often cynical tone, Letterman changed the talk show game, which was — and still is, in many cases — a cheap excuse for celebrities to promote their latest projects.

“You wanted to see how Letterman would get along with a certain celebrity,” Zinoman wrote. “His hostility in front of the famous helped define the populist style of the show and established him as more blunt and honest than the usual smiling host. His awkwardness seemed purposeful, a comment on the absurdity of flattering actors.”

Though the book is a testament to Letterman’s uniqueness, it’s just as much, if not more, of a testament to the people who helped him at every stage of his career. Late night television looks so thoroughly to the viewers at home like a one man band — the host’s name is in the title, after all. The host delivers the monologue, conducts the interviews and is quite literally the face of the show. But for all the talent a host possesses, he doesn’t succeed without a quality team.

Max Pross, Tom Gammill and George Meyer, three writers who met in college writing for the Harvard Lampoon brought in an intelligent if self-righteous attitude to the writers’ room. Chris Elliott,a production assistant turned writer, was the second most influential writer in Late Night’s history — though, as Zinoman points out, “Elliott is not often even thought of as a writer at all.”

But it’s the story of Merrill Markoe that sets Letterman: The Last Giant of Late Night apart from other biographies of successful entertainers. This book isn’t the first time she’s been properly recognized, but it does give great insight into how much of a driving force she was both on his shows and in his personal life. She’s credited with the idea of Letterman’s infamous “Stupid Pet Tricks,” a segment equally as dumb as it was fun to watch.

Had she been born about 30 years later, maybe Markoe would have been the one hosting herself — women like Samantha Bee are only just starting to break the proverbial late-night host glass ceiling. But nevertheless, her legacy will last as a key player in Letterman’s career and a feminist icon in an industry even now still largely dominated by men.

If a bit cheesy, the takeaway from Letterman: The Last Giant of Late Night is that no one — no matter the extraordinary talent or distinct personality — succeeds alone.