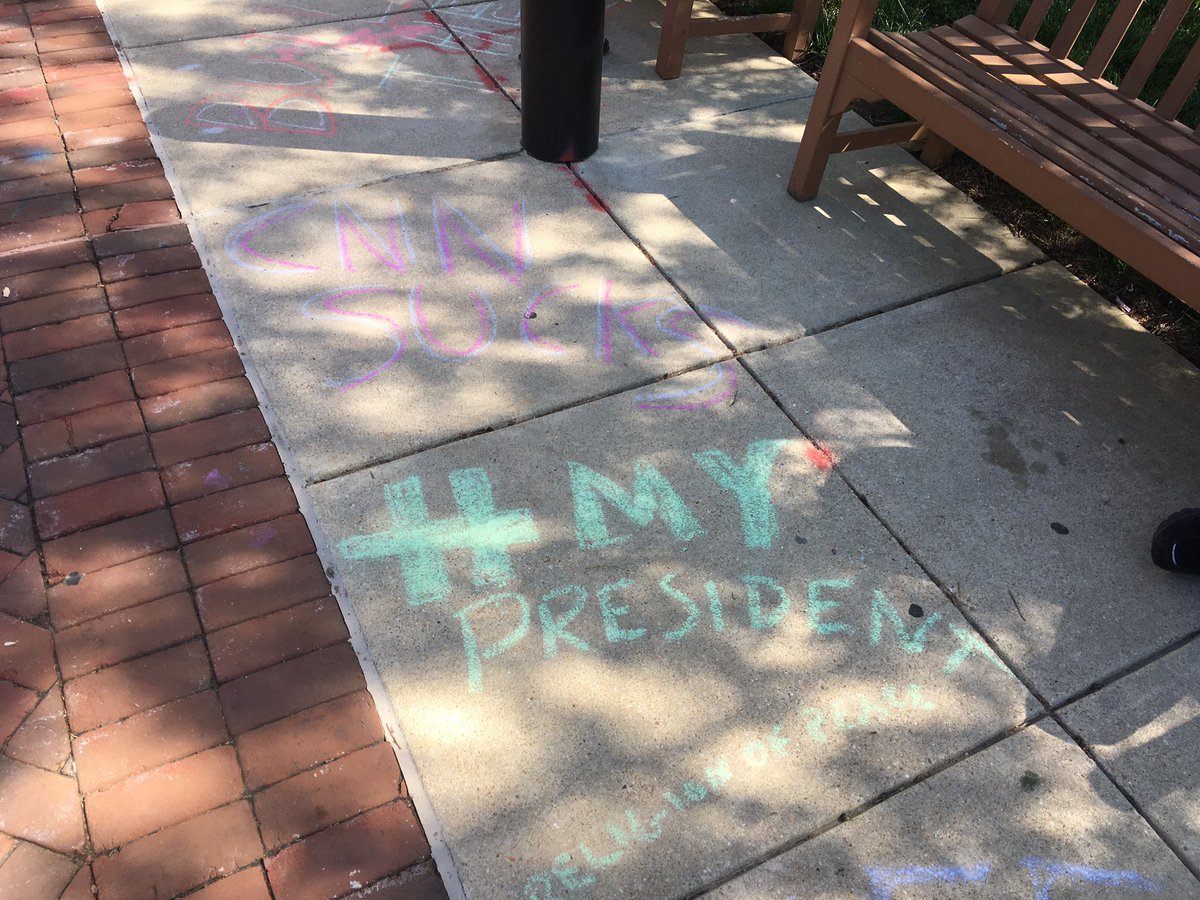 In response to the chalkings, at least four counter-chalkers used buckets of water to obscure the original messages Tuesday morning, while others passing by added to the effort using their own water bottles.

Junior Cole White, one of the counter-chalkers, said this university is vocal about issues facing undocumented students and that they felt it important to minimize the messages.

“The more you see stuff supporting bigotry around campus, the more real it becomes in people’s minds,” the Japanese and linguistics major said.

This university has 20 students covered under Maryland’s DREAM Act, which grants in-state tuition to undocumented students. As of fall 2016, this university also had 113 students under the federal Deferred Action for Childhood Arrivals program, which allows certain undocumented immigrants to work and study in the U.S. in two-year increments. While DACA is currently protected under Trump’s administration, the Department of Homeland Security began rolling out plans in February for a wider crackdown on people coming into the U.S. illegally.

Stamp Student Union Associate Director Stephen Gnadt said the establishment was “aware of” the chalking, but the original messages, as well as any counter-chalking, fell within campus guidelines.

“It’s free speech,” Gnadt said. “There’s nothing in the chalking policy that would prevent people from chalking.”

Messages must be written on flat surfaces in water-soluble materials and cannot deface walkways aside from sidewalks or decorative symbols such as Testudo or the ODK Fountain on McKeldin Mall, according to this university’s chalking policy. It does not make distinctions based on the messages’ content.

“Stamp wouldn’t do it, so we took it upon ourselves to do it,” said Ashli Taylor, a junior government and politics major who was among those pouring water. Taylor is running with the One Party to be an SGA off-campus neighboring legislative representative.

The American Bar Association defines hate speech as “speech that offends, threatens, or insults groups, based on race, color, religion, national origin, sexual orientation, disability, or other traits.” It is protected by the First Amendment.

They decided to “write different messages, like ‘Support DREAMers’ instead of ‘Deport DREAMers,'” Mahesh said.

“I don’t necessarily think it’s hateful,” Morris said of the Terps for Trump chalking. “I think it’s thought-provoking. I think it’s trying to bring up issues that really are serious issues for people, that do make huge impacts on people’s lives.”

Trump has repeatedly criticized CNN and other termed “liberal media” news organizations during his campaign as well as his presidency; he has barred them from a press gaggle and denied a CNN reporter the opportunity to ask a question during a presidential news conference. Trump has also praised Fox News programming as a candidate and as president.

“I heard that people had thrown water over ours and replaced it with their message,” Morris said. “And while I would love for other people to chalk, I think that erasing our message is kind of what we’re getting at.”

The Stamp’s Multicultural Involvement and Community Advocacy office is not affiliated with the counter-chalking, MICA community organizing student intern Nasreen Baten-Tschan said. MICA has chalk available to any student organization at any time, she said.