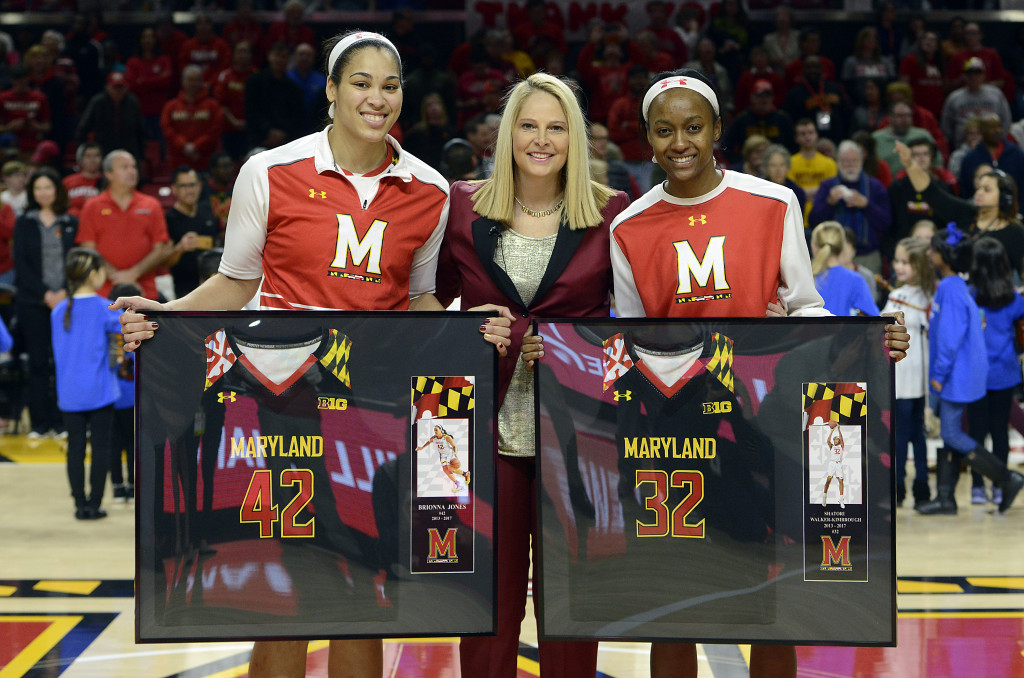 This season, they were the only seniors on the roster, climbing the program’s record books as a dominant inside-outside threat and having their jerseys hung from the rafters at their Senior Day.

Their linked journeys continued this week, when they roomed together in Manhattan, New York, to attend Thursday night’s WNBA Draft, and were feet apart at the Samsung 837 venue as they waited for their names to be called.

Then, two picks and less than 10 minutes apart, the duo learned that the orange-clothed table they sat at in the Meatpacking District represented a separation, as the Washington Mystics selected Walker-Kimbrough with the sixth pick and the Connecticut Sun picked Jones two spots later.

“We talked about it a little [before the draft], how it would’ve been great to play with her again,” Jones said. “But it was great seeing all the hard work pay off in this moment.”

Jones and Walker-Kimbrough were projected as first-round picks, but with two teams having multiple selections in the first round, including the Dallas Wings with three, there was a chance they would remain teammates in the professional ranks.

That didn’t pan out, but Walker-Kimbrough agreed their accomplishments negated any disappointment.

“I didn’t want to be up there [in New York] to not get picked,” Walker-Kimbrough said. “We were just grateful to hear our names get called.”

The celebration began before WNBA President Lisa Borders had finished announcing, “Shatori,” and continued as she worked through, “Walker-Kimbrough, guard, University of Maryland.”

Walker-Kimbrough bowed her head with a joyous smile as she was enveloped in a hug from her mom, Andrea Kimbrough, who yelled, “Thank you, Jesus,” after the almost 10-second embrace.

The level of enthusiasm and relief was in part due to Walker-Kimbrough being selected by the Mystics.

Beyond being the WNBA franchise closest to College Park, which Walker-Kimbrough calls a second home, the Mystics are also the closest team to her Aliquippa, Pennsylvania, hometown.

“I just look at it as, I’m playing with my home team,” Walker-Kimbrough said.

Meanwhile, Jones’ family is preparing to travel up the East Coast to watch the Sun. It may not be as convenient as Washington, but it’s one of the closer teams in the league.

Jones, a Havre de Grace native, said she’s thankful for the proximity. Plus, she already has one connection. Her dad, Mike, went to school in Connecticut, and he’d already told former teammates they can expect to “see a lot of him” in the coming months and years.

Both families already have a date circled on the calendar: May 31. That’s when the Mystics host the Sun in the Verizon Center.

“I was talking with Shatori’s grandma, we were hoping they would get on the same team,” Mike Jones said. “But then we both just said, ‘We’ll see you when Connecticut comes to Washington.'”

Walker-Kimbrough said that the matchup would be “a little weird,” but that wasn’t at the forefront of her or Jones’ minds Thursday. They were in a more reflective mood.

Almost five years ago, they arrived in College Park within 24 hours of each other, a different day than the other two members of their recruiting class.

They went to the Final Four in their first two years and watched as their two classmates transferred, turning the duo into even closer friends as they developed into highly touted WNBA prospects.

So, even though they arrived in New York as teammates but left with different jerseys, they cherished the draft experience as a fitting and deserved end to challenging four-year careers.

“It’s a beautiful thing,” Andrea Kimbrough said. “We love the Jones family. They’ve been there from day one.

“To see how they started off and ended together, it’s just like the cherry on top.”