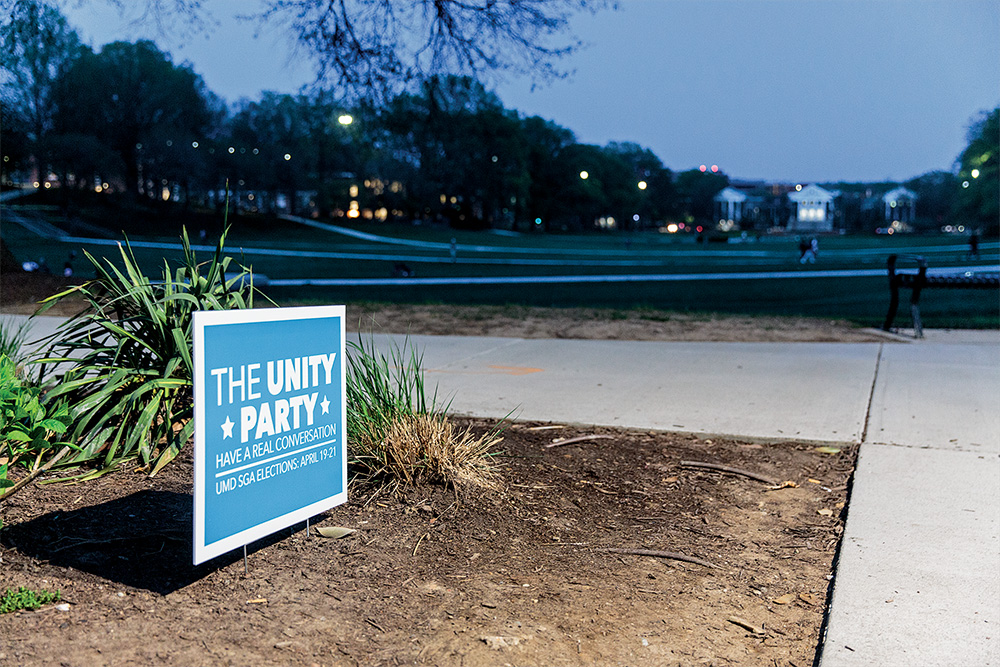 The Unity Party did not report that an affiliate of Turning Point USA, a conservative nonprofit, had designed some of the ticket’s campaign materials pro bono, a violation of Student Government Association election rules.

The Unity Party pulled out of the race via an email to the SGA Election Board at about 2:30 p.m. Thursday. In the hours before, at least six of their legislative candidates told The Diamondback they had withdrawn from the election. The former Unity Party leaders apologized in a statement for failing to keep the legislative candidates fully informed but stood by their actions throughout their short-lived campaign.

“We see the blatant corruption that exists in our University’s political climate and we sought to change it,” the leaders wrote. “In doing so, we believed the ends justified the relatively harmless means.”

The five-member Election Board received two complaints Thursday in response to information revealed in The Diamondback’s article, said current SGA President Katherine Swanson, adding that she filed one of those complaints.

Swanson said she was disappointed the student body would not have more options to choose from when they vote next week. The One Party, led by SGA incumbents, is now the only ticket still in the running, though there are two unaffiliated candidates still seeking election.

“I am sad that they withdrew and sad that they broke the rules, which caused them to withdraw,” Swanson said. “I would have liked to see a competitive election. … This means there’s less conversation about what people care about on campus and less engagement across the board.”

A debate for executive candidates will still be held Thursday night.

One Party presidential candidate A.J. Pruitt said he would be “more than happy to sit down with members of the Unity Party to understand their ideas more and how they think the SGA can improve, and how we can improve the student body.”

Student Body President candidate Chris Boretti, a freshman who is unaffiliated from a party, said the Unity Party’s withdraw does not change anything for him.

“I don’t think the reduction in competition really changes much about what I’m going to be saying,” he said. “I’m running a campaign on the issues that I think are important like I was from the beginning, and everyone is going to be able to see that on the debate stage.”

Former Unity Party candidate Jake Lubbehusen, who was running for Off-Campus – Neighboring legislative seats, said he was not surprised the entire ticket dropped out of the election. Lubbehusen, who withdrew his candidacy earlier in the day, also said legislative candidates like himself were not privy to information regarding materials such as the campaign logos designed by a Turning Point affiliate.

“I just wanted it to be a fair campaign. I didn’t want to be part of anything that wasn’t fair.” said Lubbehusen, a sophomore enrolled in letters and sciences. “I’m confident there are good people in the One Party and I do believe they will be able to make a positive impact and positive change for every member of the community.”

Documents obtained by The Diamondback on Wednesday include emails of Turning Point affiliates discussing logos for the Unity Party.

Turning Point was founded in 2012 with the mission of “identifying, organizing, and empowering young people to promote the principles of free markets, and limited government.” The group, which encourages conservative students to run for campus government positions, did not respond to repeated requests for comment.

“No, we don’t mean to shove conservatism down the throats of college students,” the Unity Party statement reads. “That would be immoral, and counterproductive to true unadulterated intellect. Quite frankly, we are more centrist than anything. However, linking yourself to a diverging train of thought on college campuses in this day and age brings lessons on McCarthyism flooding back into the forefront of one’s mind. This is what we attempted to change.”

The obtained emails, sent from addresses affiliated with Turning Point, include designs that are identical to the ones the Unity Party used on social media, put on signs around McKeldin Mall and printed on t-shirts.

All parties are required to submit a preliminary financial disclosure report by April 9, outlining contributions and all expenses. The Unity Party’s report showed members spent $196.71, primarily on candy, art supplies and name tags. Three of the four former executive candidates contributed $600 each, the maximum amount for their positions, according to the financial report.

Failing to disclose donations, such as graphic design work, is a violation of the SGA’s campaign finance regulations.

Former Unity Party legislative candidate Jonathan Ciavolino withdrew from the election before 1 p.m. Thursday and said if he had known about the violation he would have left the party sooner.

“Integrity is really, really important to me — it’s what I live my life for,” said the freshman enrolled in letters and sciences. “For me, and along of other legislative candidates, it was a shock for us. … The ends don’t justify the means for me and the means here probably weren’t the best.”

Other than the party’s official statement, former Unity Party presidential candidate Kay Barwell did not respond to repeated requests for comment about the party’s failure to mention these nonmonetary campaign contributions in the April 9 preliminary financial report.

Barwell previously stated her fiance’s cousin is a graphic designer who offered to make the graphics for free, but “accidentally sent the logo designs” through her Turning Point-affiliated email address.

“Because she had the Turning point connection, they heard about our campaign and approached us. However, we felt uncomfortable with their offer and we didn’t accept it,” Barwell wrote Wednesday night.

Barwell’s statement contradicts emails provided to The Diamondback, which show her fiance’s cousin in conversation with Turning Point affiliates regarding logo work for the Unity Party.

When asked about the financial report Wednesday, Walsh seemed unaware that the party needed to disclose non-monetary campaign contributions. Walsh indicated Thursday that the rules governing non-monetary disclosures were “just touched on” and not fully explained.

“They never spoke specifically to the fact that pro bono work needed to be reported,” Walsh said.

Election Board Chair Justin Edelman said Wednesday there were three information sessions discussing rules and regulations. The rule prohibiting donations from a nonprofit organization is bolded on the SGA’s website.

Swanson said that while that rule does appear in the SGA election rules, she does not know why it is written that way. The SGA does not direct funds toward candidates, Swanson said.

“No one as far as I know has ever received funds for their campaigns from the SGA,” she said. “The One Party does not have money coming from the SGA. That’s not happening. We are not funding anybody.”

Walsh sees the rule as written as a barrier for student government outsiders to “make a difference.”

“The fact that a 501(c)(3) or a nonprofit can’t fund anybody excludes a bunch of different people from running,” Walsh said.

The Unity Party directly addressed Pruitt in its statement.

It read, “be what we couldn’t. Use the position of power that you have placed yourself in to do right by the people you represent. Engage us. Have a showing of the movie ‘Crash’ and invite an open dialogue (actually though).”