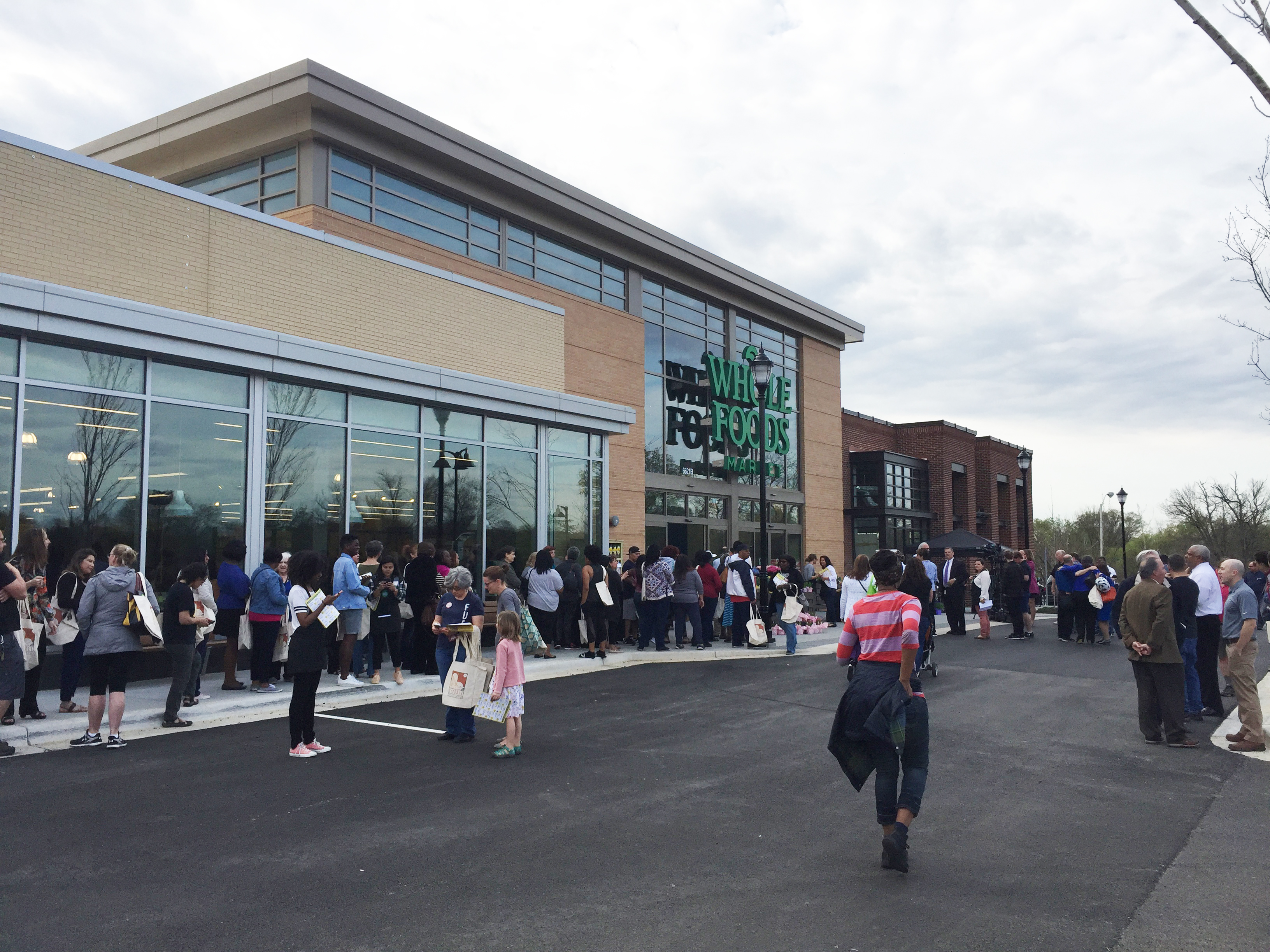 As customers waited for the store to open its doors at 9 a.m., police directed traffic into the newly constructed Riverdale Park Station — a $250 million mixed-use complex located about 1.5 miles from the University of Maryland.

“We’re just excited about the development and all the new things that are coming to the area,” said Hyattsville resident Abby Sandel. “It really puts the Route 1 corridor on the map to have a Whole Foods. It means they recognize that there are people here who are looking for this kind of quality grocery store option.”

The 40,000-square-foot store — which has been under construction for more than three years — is offering a variety of high-end grocery options, including products from local producers and companies such as Delectable Cakery, located in Hyattsville, and Honey Glow, a skin-care company based in College Park. This Whole Foods also features many specialty and self-serve items, including a self-serve mochi ice cream station, pasta bar and olive bar.

Community reactions to the development have been mixed, said Patti Kim, a University Park resident. Some locals, for example, have expressed concerns regarding increased high-speed traffic and animal displacement. The site was formerly a wooded area.

“That was a big issue,” Kim said. “They were cutting down trees and putting in another parking lot and another grocery store.”

But as the store has reached fruition, Kim noted that many residents have warmed up to the idea of a Whole Foods nearby.

“During the building phase it was, ‘We don’t need this,'” she said. “But now that it’s open there’s been a more positive attitude.”

In addition to the high-end grocery store, the Riverdale Park Station development will include other restaurants and retailers such as District Taco, Gold’s Gym, Habit Burger and Burtons Grill — all are set to open sometime this year. The complex will also feature 119 townhouses.

These developments are great for attracting people to live in the area and increasing surrounding property values, said Ken Ulman, the chief strategy officer for economic development for this university’s College Park Foundation.

Whole Foods is also looking to partner with the surrounding community and collaborate with this university, said Rachael Dean Wilson, the store’s public relations coordinator for the Mid-Atlantic region. These sorts of partnerships will play a “huge part in the success of this store,” she added.

“I would’ve loved it if it was here when we were in school,” said Josh Colver, a 2008 university alumnus who lives in Alexandria, Virginia. “It’s kind of a big deal for this area. … There isn’t really a legit grocery store right near campus.”

Whole Foods will also work with local nonprofit organizations, said Johanna DeGuzman, the store’s marketing and community liaison. There will be several giving days throughout the year, when 5 percent of the day’s sales will be donated to a local charitable organization.

The first 5 percent day will be on April 19, with proceeds going to this county’s Court Appointed Special Advocates, an organization advocating for abused and neglected children in the area. The store has already planned a subsequent 5 percent day for June 22, but has not chosen a beneficiary, DeGuzman said.

Though Whole Foods did not give CASA a sales estimate for that day, Bundy said from preliminary research, the average daily sales per store total about $100,000.

“We are confident and hopeful that with it being within the first week of the store being open, that the sale will exceed that for the day,” Bundy said.

For Riverdale Park resident Monica Galli, the store’s opening is a sign of good things to come for the town and the county as a whole.

“Finally,” Galli said. “Something nice in our town.”