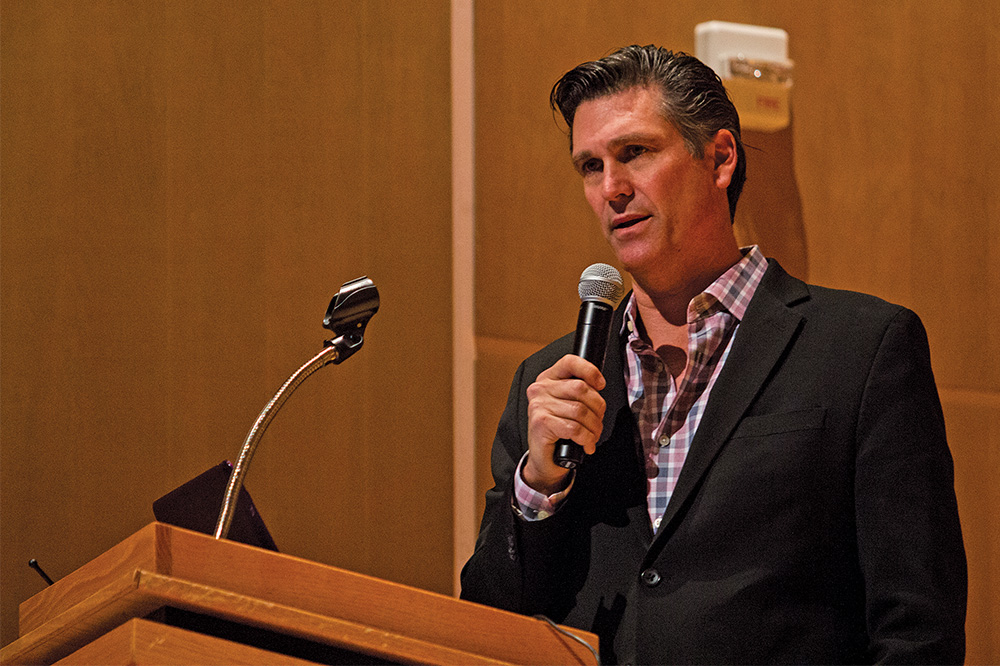 Mark Ciardi, movie producer and Maryland alumni, speaks in the Ulrich Recital Hall in Tawes Hall about "why he left Disney" and the future of the entertainment industry on Thursday Feb. 4, 2015.

University of Maryland alumnus Mark Ciardi, founder and CEO of Apex Entertainment and former Major League Baseball pitcher, will deliver this university’s spring commencement address at Xfinity Center on May 21.

Ciardi played on this university’s baseball team and completed his business degree in 1983. After graduation, the Milwaukee Brewers drafted Ciardi and he moved up to the major leagues in 1987, which he called a dream. Ciardi retired a year later due to a shoulder injury.

“Mark Ciardi is an outstanding example of an alum who pursued success with focus and tenacity,” Vice President and Provost Mary Ann Rankin said in a news release. “He knows how to tell an inspirational story, and his remarks will surely prepare and motivate our University of Maryland graduates to pursue their dreams.”

After retiring from baseball, Ciardi started producing movies with a business partner “out of a garage” in California, his offseason home. Since his move to the film industry, he has produced sports films such as Invincible, The Rookie and Miracle. He has also produced a documentary, Big Shot, for ESPN’s Emmy award-winning series 30 for 30.

“I’m still asking myself how that happened,” Ciardi said, reflecting on his move to the film industry. “Looking back, you take a chance like that, and maybe it kind of happens or it doesn’t happen, but we hung with it and we were able to become producers.”

Although his education wasn’t rooted in film, Ciardi said the school’s emphasis on taking chances and instilling an “entrepreneurial spirit” in its students has helped mold his life choices and film career.

“That’s also a theme in my movies — underdog stories,” Ciardi said. “That’s part of the attitude you have to have when you come out of school. Prove something to people and yourself and take chances.”

Ciardi said one of the main messages of his commencement speech will be “to keep yourself open to opportunities and take calculated risks.”

While most college students try to pursue a job within their major, “it doesn’t always happen that way,” Ciardi said.

“Follow your heart, follow your passions and you might go between several types of jobs,” he said. “It’s all a path that you go on … and it leads you in different directions.”

University spokesman Brian Ullmann said the Commencement Speaker Selection Committee — which consists of faculty, staff and students — looks for a speaker who is interesting, has a compelling story and can present well. Even if students are unfamiliar with Ciardi’s name, they will be familiar with his work, Ullmann added.

“People are going to get out of it an inspiring story of success, peppered with really great stories from Hollywood,” Ullmann said.

Although it was “definitely a tough decision,” Swanson said there was consensus about picking Ciardi as the finalist.

Ciardi lives in Los Angeles and said he tries to visit the university every chance he can, adding that he met some of his best friends in college. He speaks to the baseball team annually and has served on this university’s Board of Trustees for six years, he said.

“I enjoy doing things for the university and I’m excited to speak to the students and hopefully try to inspire them,” Ciardi said. “Anything that can get me back and that I can kind of do for the school, I will do for a lifetime.”