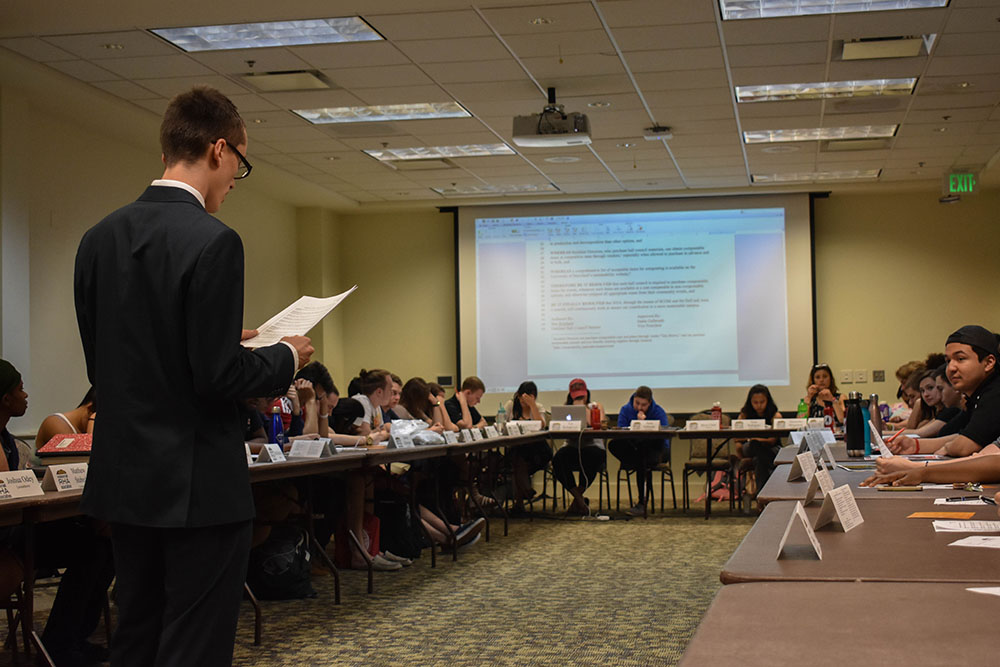 Oakland Hall senator Ben Reichard explains one of the three proposed resolutions at the RHA meeting.

The University of Maryland’s RHA unanimously passed a resolution outlining plans to expand diversity and inclusion efforts during its Senate meeting Tuesday night.

The resolution urged this university’s administration to “allocate additional resources to develop a more robust portal for undocumented and/or minority students” that incorporates resources offered by various student organizations and connects students to relevant reporting mechanisms, the resolution read.

[Read More: University of Maryland will now have an undocumented student coordinator]

“The goal is to imagine a database or a site where students of color, minority students, can access and can understand what resources are available to them on campus,” said Residence Hall Association President Steve Chen, the resolution’s author. “How do they report instances in which they have felt harassed or uncomfortable? What kind of dialogues or support systems … can help them adjust to the college life, or help with any pressure that they feel?”

Tuesday night’s resolution also called for the RHA to continue work with the administration to develop and engage residents in the Maryland Dialogues on Diversity and Community program, and to “collaborate with student affairs to explore opening additional space on campus for student groups to … increase diversity programming.” The dialogues program is “a series of events, lectures, symposia, discussions and listening sessions for faculty, staff, students and alumni to help advance discussions of identity, difference and commonality,” according to the program website.

Prior to passing the resolution, RHA members attended a March 7 panel discussion called “Building a Community of Care: How to Affirm and Support Immigrant and Undocumented Students,” and hosted a Diversity Roundtable on March 16 that the Student Government Association, Graduate Student Government, Muslim Student Association and Sikh Student Association attended. The panel discussion focused on topics such as how to enhance responses to recent and potential immigration changes and the mentoring of immigrant and undocumented students, a university website stated. The diversity roundtable aimed “to solicit feedback and perspective from the campus community” on how to better advocate for minority students, according to Tuesday’s resolution.

[Read More: ProtectUMD has 64 demands to aid vulnerable students. These are their stories.]

The RHA in November passed a resolution as well that stated it would explore the designation of this university as a sanctuary campus, along with the most effective ways to advocate for minority and undocumented students, Chen said. There are 113 students under Deferred Action for Childhood Arrivals as of fall 2016, and 20 DREAM Act recipients.

Other student organizations have also shown support for minority populations. The SGA passed legislation in November urging the administration to declare a formal sanctuary campus designation — the same month that ProtectUMD, a student group coalition that includes various multicultural organizations, submitted a list of demands to this university’s administration that ranged from offering prayer spaces to hiring more professors of color. The GSG also passed a resolution in January to support legislation that would protect undocumented students at this university.

On top of passing a resolution Tuesday to expand diversity initiatives, the RHA Senate also elected RHA Student Groups and Organization Liaison Dana Rodriguez and Senator-at-large Tzvi Glazer as its president and vice president, respectively. They ran unopposed, and will assume their new roles on May 2.

Other matters of business included reviewing two resolutions regarding senator apportionment and mandating compostable items for hall and area council events. They both passed.

The vote for updating senator apportionment was 40-2, with no abstentions.

RHA bylaws stipulate that there has to be one senator per 250 residents, with additional senators being considered when a hall or area has an excess of at least 100 residents. Some halls, such as Oakland Hall and South Hill Community, currently have excess residents above the 100 resident threshold, prompting the need for more senators to give them “a more proportional voice in student policy,” the resolution read. The resolution calls for RHA and the Department of Resident Life to apportion additional senators to these communities in future academic years, pending confirmation of assignment numbers.

“Ultimately, we haven’t been doing our jobs,” RHA Vice President Sasha Galbreath said. “I’m sure it’s been said before, I know that the apportionment hasn’t been great but I haven’t done anything because this hasn’t been shoved in my face. I’m a proponent of the resolution.”

The vote regarding the resolution mandating compostable items for hall and area council events also passed 41-1, with no abstentions.

Hall and area councils routinely host community events that frequently include the use of items such as plates, utensils and cups. This resolution would require hall and area councils “to purchase compostable items for events, whenever such items are available at a cost comparable to non-compostable options, and otherwise compost all appropriate waste from their community events.”

“[RHA sustainability committee] thought this was going to be an effective first step to making sure that our values as an organization — our commitment to sustainability — actually translate to practice,” said Oakland Hall Senator Ben Reichard, the author of the resolution.