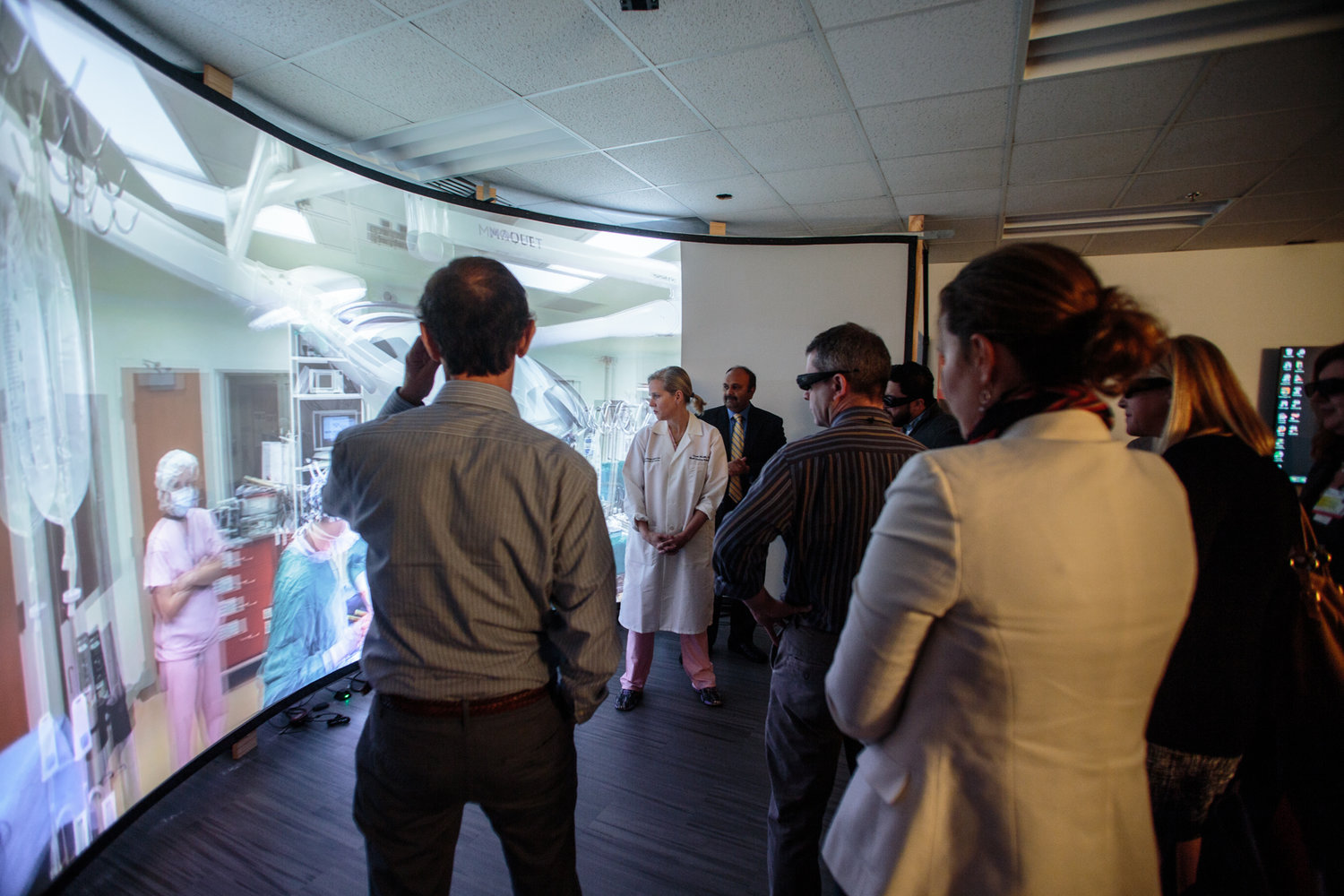 Researchers at the University of Maryland’s Augmentarium introduced their augmented reality technology last week, taking a step toward the technology’s use in the operating room.

A team of five physicians and researchers, including Amitabh Varshney, a computer science professor and Augmentarium director, publicly demonstrated augmented reality technology designed to assist in intubation — putting a tube down a patient’s airway — and ultrasounds to a small crowd at the Newseum on March 27. The software used in the demonstration, which ran on Oculus and Hololens headsets, was developed at the Augmentarium, Varshney said.

The demonstrated augmented reality technology projects real-time information from the ultrasound onto the user’s field of view, said Barbara Brawn-Cinani, associate director at the university’s Center for Health-related Informatics and Bioimaging. This allows medical staff to see ultrasound images, for example, at the same time they’re looking at the patient, rather than having to repeatedly look away at small screens displaying the images, Brawn-Cinani said.

The technology was a collaborative effort between the Augmentarium and the University of Maryland School of Medicine’s shock trauma center and has been in development for about a year, Varshney said. It is still being refined, he added.

“Our next big steps are user studies for clinical practitioners,” she said. “We need to determine if this is an advantageous tool for use in clinical settings.”

And in addition to helping medical personnel with tests such as ultrasounds, augmented reality technology could help create three-dimensional simulated medical environments for health care providers to be trained in, according to the Augmentarium website. Non-invasive reminders that project some form of data onto the user’s field of view are another main application of augmented reality — in medicine and also in architecture and the military, Servia said.

“Some surgeries are very complex,” he said. “Maybe we can standardize the entire surgery throughout the United States with this lightweight device that can augment the steps of the surgery that are non-invasive.”

The process of having this technology implemented in hospitals around the country will include researching how information can be presented the best on the headsets to surgeons, securing all the necessary permissions and approvals from entities such as the Food and Drug Administration and popularizing the technology among health care professionals, Varshney said.

The Augmentarium, founded in December 2014 with a $1.6 million grant from the National Science Foundation and support from this university, makes use of cameras, displays and sensors to research augmented and virtual reality. The Augmentarium also receives funding from the MPowering the State initiative, a formal partnership between this university and the University of Maryland, Baltimore, Varshney said.

On top of this collaboration with the shock trauma center, the Augmentarium is working on other applications of augmented reality technology, from fluid dynamics to performing arts. The center is planning on working with the sports medicine center in Cole Field House, Varshney said, to better detect subtle effects of traumatic brain injuries that previously have been impossible to visualize without augmented reality.

“This amazing technology could really have a significant impact on our society,” Varshney said.

While augmented reality is “ahead of its time,” Servia said, it will begin to see more practical application in the future as hardware limitations are solved. He said a common complaint among military research personnel was the durability and size of current augmented reality headsets. People are becoming more accustomed to the prospect of augmented reality, however, especially in the medical industry, Servia said.

“We are looking at virtual and augmented reality as basically being the next great shift in how the human society consumes information,” Varshney said.

CORRECTION: Due to a reporting error, a previous version of this story incorrectly referenced Barbara Brawn-Cinani as an assistant director at the university’s Center for Health-related Informatics and Bioimaging. She is an associate director. This story has been updated.