“Reclaim this campus for them”: UMD students support sexual assault survivors at sit-in 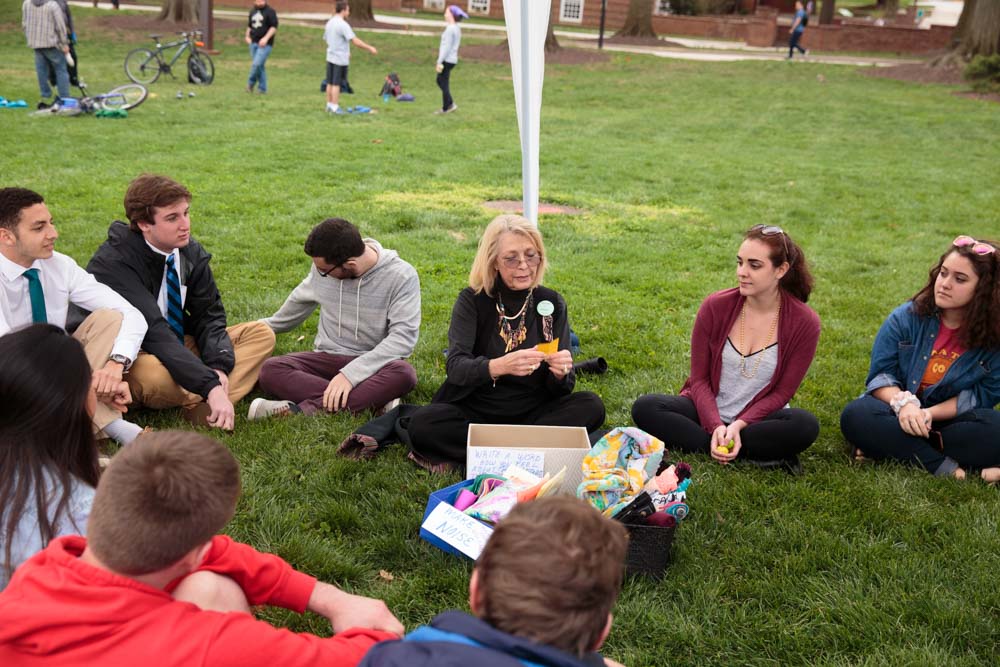 Sarah Stephens first started college at age 18 in 1994 “optimistic, full of life and full of opportunity,” she said. But at age 20, she ended up in a relationship that turned toxic and sexually violent.

“The experience of being in a mentally, physically, emotionally and sexually abusive relationship completely robbed me of my ego,” said Stephens, speaking before a group of peers at the second annual Occupy McKeldin sit-in on Monday. “I had no idea who I was anymore. I spent several years just surviving.”

The effects of the abuse caused her GPA to plummet to 1.58. She moved back home at age 21, feeling like a “complete and total failure,” she said. She’d end up coming to the University of Maryland in 2016 to complete her degree.

“Sexual assault is not an event that happens and is over for people who experience it,” she said. “There are far-reaching consequences, and survivors of sexual violence and intimate partner violence live with those scars for the rest of their lives.”

Occupy McKeldin, which the student organization Preventing Sexual Assault hosted for 10 hours at the center of McKeldin Mall, aimed to educate students about sexual assault and provide survivors with an outlet to heal with the support of the campus community. Dozens of students including Stephens shared their personal experiences of sexual assault, either in-person or read aloud through anonymously collected notecards. Hundreds of people participated throughout the day, and most Greek life chapters and nearly 600 sorority and fraternity members signed up to attend.

“We had more students who reached out to me [this year] prior to the event to speak, which is amazing,” said Alanna DeLeon, PSA president and a senior community health major. “Last year it was more open mic and students did come, but it was really difficult to get survivors to speak about this. This culture is really starting to shift on this campus to allow survivors to feel like they can have that voice.”

Scheduled speakers ­— including Lili Bernard, Victoria Valentino and Charlotte Fox, who have all publicly alleged that Bill Cosby sexually assaulted them — shared stories at a podium, encircled by sit-in participants. And campus groups and organizations that provide resources for victims of sexual assault, such as CARE to Stop Violence, had booths set up on either side of the mall’s fountain. PSA also provided yoga, acupuncture and moon bounce stations to help anyone triggered by the speeches to relax.

“By using the sit-in, we’re showing the administration and the rest of the campus at-large that students are willing to sit down, take this time out of their schedule on a Monday and listen to the speakers to educate themselves,” DeLeon said. “And that’s really the point, making students understand and everyone understand that education starts with yourself.”

Bridget Connolly, a senior government and politics major and PSA member, said the event was geared toward showing this university’s administration that students want officials to take more action on sexual assault.

“It can be discouraging … to see we are under investigation and that investigations are taking far longer than 60 days,” Connolly said.

This university’s policy recommends the Title IX office resolve sexual misconduct cases in 60 business days, but many have taken at least twice as long. This university and 223 others are currently under investigation by the U.S. Education Department’s Office for Civil Rights for their handling of sexual violence issues as of late January. This university was one of five added in the final weeks of former President Barack Obama’s administration.

“Our community deserves better, and we should hold them to a higher standard,” Connolly said.

McLaine Rich, a university alumna, founded PSA in 2015 after being sexually assaulted in October 2014 by another student. During her own Title IX investigation, Rich said she found it difficult to get in touch with the Title IX officers for an update on her case. It also took her attacker nine months to be expelled from this university.

“There’s no perfect solution obviously,” Rich said. “But I think there’s a certain degree of compassion that needs to improve within the [Title IX] office. … They are struggling with the fact that they have limited resources, so then they fail to communicate with the students because they don’t really have much new things to tell you.”

Rich noted that she had still wanted a reassurance that they hadn’t forgotten about her case, even if there was no update.

For Jeffrey Patterson, a junior economics major and Sigma Nu fraternity member, the administration is doing enough to prevent sexual assault on the campus.

“We have a lot of resources on campus and we’re consistently getting educated,” Patterson said. “One of the most important factors in stopping sexual assault is the education of everyone and understanding boundaries and consent. We are getting enough, especially with presentations like this that show us how to help stop it.”

The university added six new positions last semester between the Office of Civil Rights and Sexual Misconduct and CARE after the Student Government Association proposed a $34 annual student fee to increase funding for the Title IX office. And as of last semester, CARE began to incorporate bystander intervention training into all sections of UNIV100: The Student in the University.

Zach Ferrante, a junior economics and psychology major, said it can be difficult to assess whether the university is doing enough because it can be hard to call attention to something that can be very private to people.

“Having events like these where people can come out … and making it known that it is at least an issue is very important,” Ferrante said. “Maybe the administration as a whole could do a little better in calling more attention to the issue.”

Bernard, one of the speakers, shared her personal story before urging the attendees to actively fight against rape culture.

“Whether you are another survivor, or an ally, or a bystander, [I want you] to do something that we victims do involuntarily,” Bernard said. “We are drafted into this war on rape. … Enlist yourself on the war on rape. It takes the whole community to stop this.”

Bernard later held a workshop where she asked the audience to draw or write negative things on one side of a small red heart and positive things on the other. Bernard’s heart included pictures of items she tried or wanted to use to commit suicide after her alleged assault, she said, such as a rope or a knife. On the other side, she wrote, “I did not kill myself.”

People broke into groups and tied their hearts together to represent how survivors can draw on each other for strength before reading aloud what others wrote on their hearts to practice being empathetic to one another’s feelings.

Jocelyn Nolasco, a sophomore government and politics major, said she didn’t stay for very long last year when she came, because she had noticed the majority of people attending were white women. She added that it’s important for the university in general to have “more representations of the cultures the university does have and also [to make] sure that those resources for people of different backgrounds is well-known.”

“It becomes a problem when the other narratives aren’t mentioned at all,” Nolasco added.

Stephens noted that it is important people don’t limit the issue of sexual assault to cisgender males and females or heterosexual relationships, adding that not enough research and attention has been focused on LGBTQ communities. Members of the LGBTQ community face higher rates of stigma and marginalization and are therefore at greater risk for experiencing sexual assault, according to the Human Rights Campaign.

PSA Secretary Jillian McGrath said she was happy with the event’s turnout despite her better hopes for the weather. The event ended at 8 p.m. instead of 10 p.m. because of the rain.

“We’re occupying the most public green space on our campus and making a statement that we aren’t going to be silent,” McGrath said. “We believe all of the survivors, and we’re going to work as hard as we can to reclaim this campus for them.”