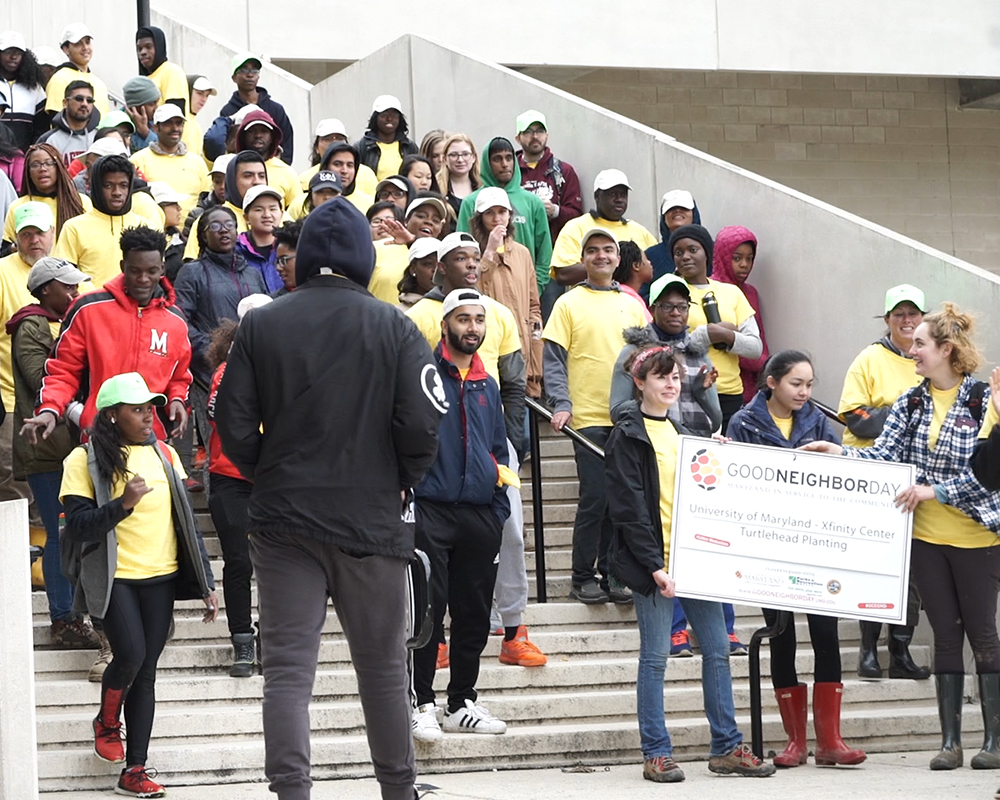 The start of the event took on a somber tone when a student volunteer discovered the dead body of former university professor Stan Fromovitz during a cleanup project along Indian Creek Trail. Prince George’s County Police have not determined the cause of death, but do not suspect any foul play, said Sammy Patel, the deputy chief of PGPD’s Bureau of Investigation. Fromovitz had been missing since March 13.

“Anytime something like this happens, it’s sad,” Wojahn said Saturday. “My heart goes out to the family.”

Despite the circumstances, volunteers persisted and completed projects well into the afternoon. The volunteer turnout at Good Neighbor Day — a partnership between the University of Maryland and the city of College Park — well surpassed last year’s turnout of about 400 participants. More than 700 volunteers had registered for the event, including more than 450 students.

Sarah D’Alexander, community engagement coordinator for the Office of Community Engagement, said she was pleased with the day’s turnout.

“We never expected that we would get this many volunteers,” D’Alexander said. “We’re glad that we had this opportunity to have an event that meshes the community together from their different home bases.”

Volunteers gathered at 9 a.m. Saturday at the College Park Community Center before going to one of 11 project sites. Those who volunteered with Terps Against Hunger packaged 22,000 meals for families that experience hunger in the D.C. metro area, exceeding their goal of 15,000. Volunteers also collected 3,500 pounds of food for the food drive leading up to the event and delivered the donations to the College Park Community Food Bank on Saturday.

Carson said she planted the flowers, put up protective fencing and planted mint around the fencing to prevent deers from eating it. While she volunteered as part of a requirement for the University of Maryland Incentive Awards Program, she said she enjoyed the day of community service.

“It’s a good opportunity to give back to the community that’s given so much to us,” Carson said.

Hannah Clark, a junior physiology and neurobiology major, said she volunteered at the UMD Community Learning Garden next to Eppley Recreation Center on behalf of her sorority, Sigma Kappa. Volunteers at the site helped put down mulch and clear out old plants.

“It’s a great experience,” Clark said. “There was so many different options, so there was something for everyone.”

College Park Mayor Patrick Wojahn also participated in the community service day. Wojahn ran a 5k with ParkRun, one of Good Neighbor Day’s sponsors that hosts a weekly run in this city. After the run, he joined in picking up litter and removing invasive plants by the Paint Branch Trail.

“I love this event because it brings people together from the community, people from the university, and folks who may not be as aware of the community around the university,” Wojahn said. “You get to know the people that live here and the neighborhoods and do something to have an impact here.”

Along with the scheduled site visits throughout the day, the community center also hosted a community organization expo including tables from the College Park Rotary Club, University of Maryland Police Department, the College Park Committee for a Better Environment and Prince George’s County Crime Solvers. Good Neighbor Day also featured a bike rodeo outside the community center for about 25 children to practice riding a bike and learn about bike safety.

The bike rodeo has been in place for several years, said Tedd Russell, the bike rodeo coordinator for the Maryland National Capital Park and Planning Volunteer Association, adding that Good Neighbor Day was a good opportunity for kids to take part in the larger community.

“We set up obstacle courses for them to ride, teach them bike safety and provide interaction with the park police,” Russell said. “It gives them exposure to see the volume of volunteers that come out to participate in Good Neighbor Day and see that there is a responsibility of giving back to the community.”

“You get out of the community what you put in,” Mitchell said. “We’re all working toward a common goal, and that is improving life, beautifying our neighborhoods and working with students.”

Police officers ensured the students who found Fromovitz’s body knew there were resources available to help them move forward.