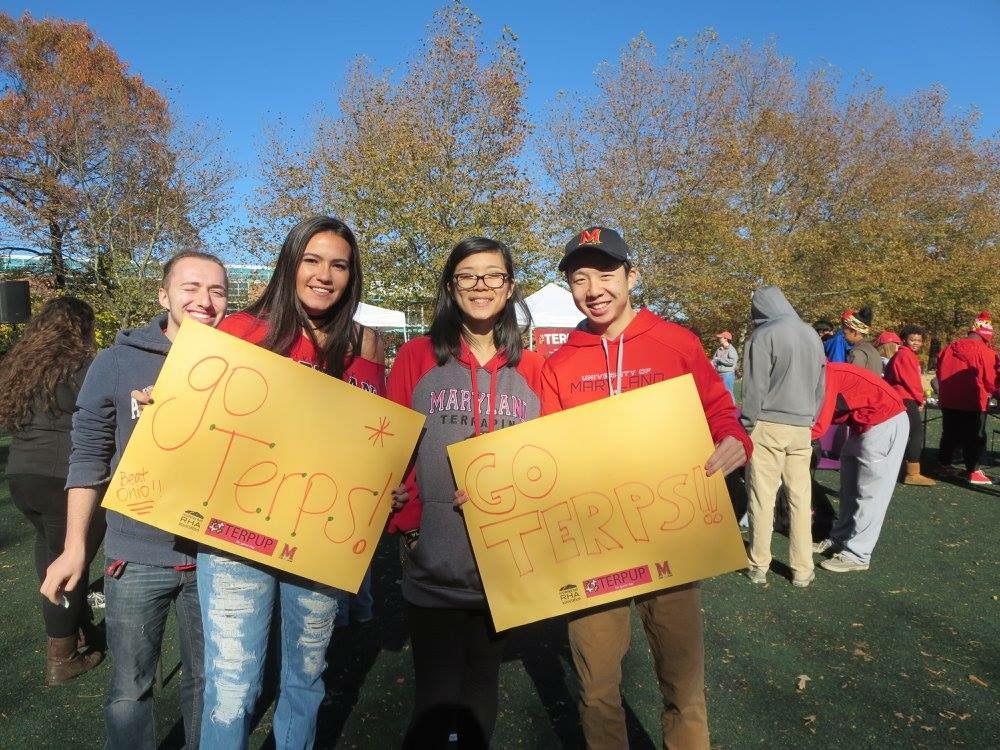 The tailgates, hosted at LaPlata Beach two hours before every home football game, began during the 2014-15 school year through a Department of Resident Life, Residence Hall Association and University Recreation and Wellness joint partnership after this university joined the Big Ten, said Tracy Kiras, Resident Life communications and marketing assistant director. Other groups such as the athletic department, The Pride and Transfer and Off-Campus Student Life have also partnered in the past, she added.

With a few years under the program’s belt, the organizations are now evaluating its success and debating whether to continue it, in addition to searching for ways to improve the event to resonate with more students. Six Resident Life officials and two RHA executive board members attended Thursday’s meeting.

“We want to make sure it’s meeting students’ needs, that it’s appealing to students and something that they’re interested in attending,” Kiras said after the meeting. “With any event that we sponsor, we always like to revisit and make sure that our program objectives and goals are being met and that there is still a need for the event.”

The event allows students and alumni who may not want to have drinking be a part of their tailgating experience to gather and rally before the game, offering activities such as temporary tattoos, face and body painting, sign-making, cornhole, DJs and free giveaways. Suggestions for possible future activities brought up during Thursday’s meeting included bringing in inflatable bounce houses, holding an interactive quiz show similar to Jeopardy and possibly providing food, RHA President Steve Chen wrote in a message.

Resident Life conducted a survey in 2015 after the last Terp Up for Game Day for that school year and received “really positive” feedback from about 60 students who responded regarding the tailgate’s activities, what they liked most and whether the event should continue, Kiras said.

Despite the positive feedback, Resident Life has seen “diminishing attendance from year to year” at Terp Up for Game Day, she said. The event could be “a lot more popular,” Kiras said, if the tailgates became more of a student initiative, with groups such as the RHA, Student Government Association and The Pride — Maryland Athletics’ student fan organization — coming together.

The lowered attendance could also be because of the tailgate’s earlier start times this season, she added. Half the Terps’ six home games were at noon, and the tailgate began two hours before kickoff “so that students can get ready and get Terped up to go into the game,” Kiras said after the meeting. “With a 10 o’clock start time, that certainly dampens attendance.”

The tailgate also typically runs at about the same time as the university’s Greek life tailgate, which allows attendees with student IDs and IFC wristbands to pregame with beer at the practice football fields.

A suggestion that came out of the meeting was to consider switching the event from being before every football game to just two of them: the first home football game and the homecoming game, said Chen, a senior biology and individual studies major. He noted that in the case of the tailgates, quality would be better than quantity.

“The more events you try to have, the less amount of money goes to each of them,” Chen said following Thursday’s meeting. “At the end of the day, interesting things cost money. We’re looking at how much money do we have, and what is it that we’re trying to do and how much will it cost to implement ideas that would ensure students are interested.”

Chen noted in a message that Resident Life covers the cost of hosting these tailgates.

Audrey Simmons, a senior hearing and speech science major who was not at the meeting but has attended the Terp Up tailgates since they started, agreed that holding just those two would be more beneficial.

[Read More: For beer and burgers before the UMD Homecoming game, head to the tennis courts]

“There’s usually the most interest for the first game and the homecoming game,” Simmons said. “Focusing energy on two of them, students could maybe have more resources or get more excited. We could plan to attend it, instead of it being something that happens every single time and they may or may not go. Now I think students will be like, ‘Oh, there’s definitely going to be one for homecoming. I’m excited, I’m thinking about it, I’ll include it in my game day plans.'”

No one overtly disagreed with the scheduling change, Chen wrote in a message. There has not been an official decision made regarding the suggested switch to two games.

Resident Life and RHA plan to meet one more time by the end of this semester to make decisions regarding how to move forward and what activities they’d like to have if they choose to host Terp Up for Game Day again in the future, Kiras said. This decision would then determine their meeting schedule moving forward.