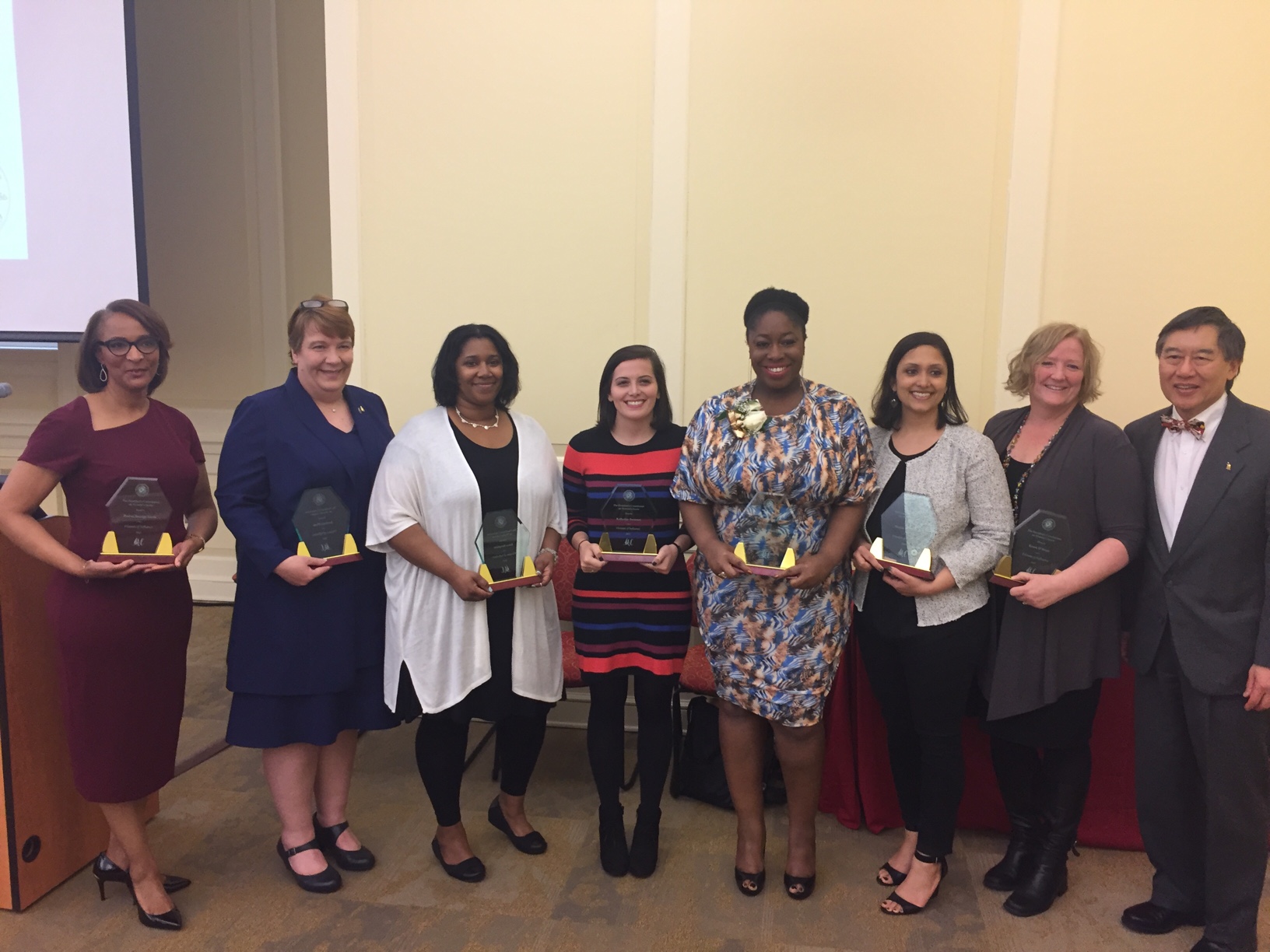 When Sallie Holder arrived at the University of Maryland in 1959, women weren’t allowed to wear pants on campus. Come spring 1960, though, the dress code had loosened.

“I had this brown plaid pair of Bermuda shorts, and the first time I got to wear those on campus I really thought it was special,” the 1962 graduate said.

By the 1980s, women were free to wear sweatpants, or “anything else you didn’t have to iron in the morning,” as 1991 graduate Nicole Pollard said with a chuckle.

At Friday’s Celebration of Women event in McKeldin Library’s Special Events Room, several female members of the university community shared their experiences, received awards for their service and looked to the future.

Holder and Pollard, along with 1949 graduate Ellie Fields and 2016 graduate Sarah Niezelski, sat on a panel moderated by Stamp Student Union Director Marsha Guenzler-Stevens. On the final day of Women’s History Month, the panelists discussed how the university has changed over the years and gave advice to about 70 people listening.

Looking back on her time at this university, Holder, who graduated with a degree in home economics, lauded the addition of organizations and resources to help students get ahead in their careers. She also recommended that students network in their career fields to get ahead.

“The networking often gets you into a door, and you would never see that job advertised,” she said. “Anything you can do where someone kind of opens the door for you, in some way, is helpful.”

When discussing sexism and how to combat it, Niezelski emphasized a proactive approach, from people of all genders.

“If women — and all people — feel comfortable saying, ‘Hey, this isn’t cool’ … then the problem of any kind of discrimination kind of just melts away,” she said. “If people feel comfortable speaking up and people are willing to listen, then everyone just has a better time.”

Pollard, meanwhile, stressed the importance of confidence for women going into male-dominated professions.

“Be bold enough to say, ‘You know what? I’ll be the first.’ Because there are still a lot of firsts out there,” she said. “Go with the assumption of, ‘Yeah, a women’s supposed to be in this position.'”

Junior Gabriella Robles appreciated Pollard’s advice, as well as her presence on the panel.

“Her background in law, and also being a minority — that’s a great thing to have as a role model,” the sociology major said.

The 1916-17 school year was the first that a four-year female undergraduate student enrolled in this university, and the progress since then has been “absolutely remarkable,” University President Wallace Loh said during a speech at the event.

“[The progress] hasn’t occurred overnight,” he said. “Any real and lasting changes we build in a democracy are incremental rather than wholesale. It is evolutionary rather than revolutionary.”

After the panel adjourned, seven female members of the university community received Women of Influence awards for their contributions. Each recipient gave their thoughts on how women can continue to improve their standing, as well as the world itself.

One recipient, psychology professor Jandelyn Plane, has worked on service projects in countries from Rwanda to Afghanistan. Despite the challenges she faced, she said she saw the need to keep going and never give up.

Student Government Association President Katherine Swanson, another award winner, discussed advice given to her when she interned in the Texas Senate. One day, as Swanson watched five male colleagues plan an event, she recalled Sen. Sylvia Garcia (D-Houston) told her, “Why are you sitting in the back of the room? All the men are at the table — get in there.”

The suggestion prompted Swanson to join the men and help plan the event. The senior government and politics major said she passes this advice along to other women in the SGA.

“I would not be here today without the women who have supported me,” Swanson said. “I really believe that this is something that we cannot lose sight of.”