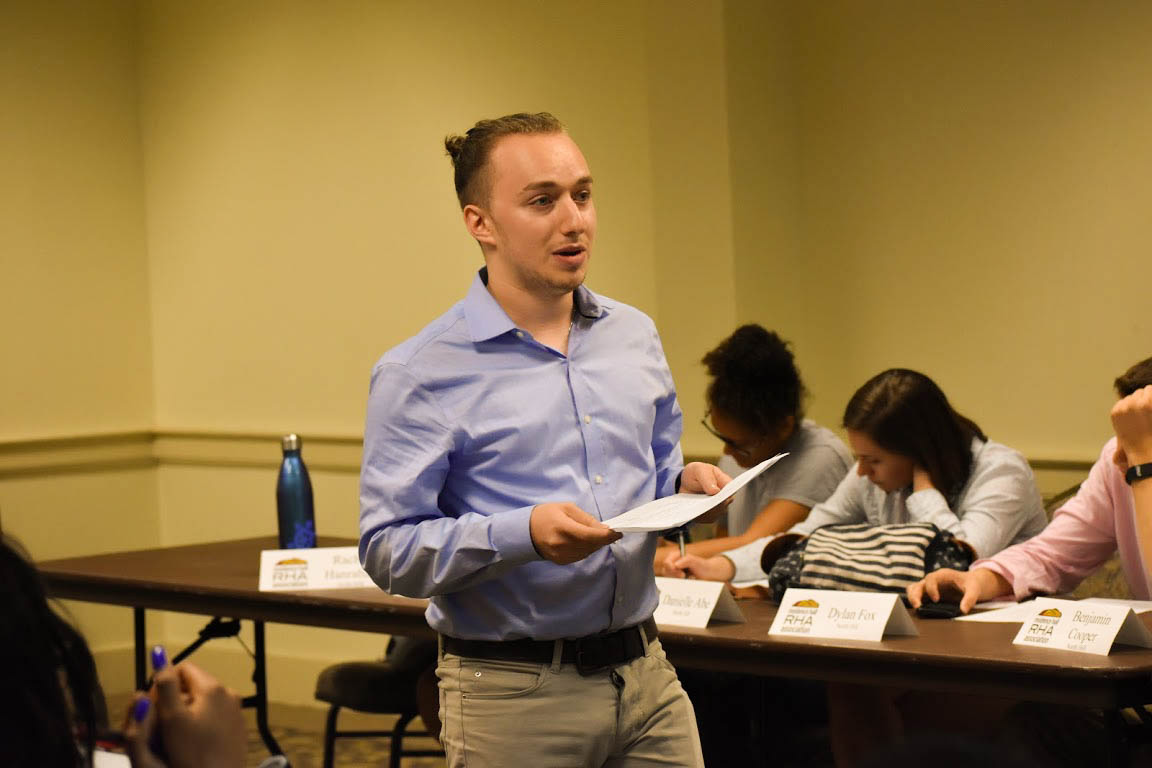 Doron Tadmor explains one of three proposed resolutions about the Student Code of Conduct.

Two of the proposals, which would consist of modifications to an attorney’s role and the threshold of evidence needed to be used in student conduct proceedings, are consistent with the majority of higher education institutions around the country, according to a March 1 RHA press release. The third proposed change would alter the language in the code to make it easier to understand.

[Read More: The University of Maryland Senate will revise the “antiquated” code of student conduct]

This university is in a small minority of institutions that allow attorneys to fully participate as representatives in the student conduct process, the resolution reads, which “causes significant delays in case resolution time and often reduces the potential for student learning from the discipline process.”

These proposed alterations would move the role of attorneys from student representatives to advisers in the student adjudication process.

“This is an administrative process and the goal in these changes is to make it less formal and make it less judicial,” said Dana Rodriguez, a junior finance and government and politics major. “They don’t want to, as a student who may be facing charges, to come to a board and then have to feel like you have to defend yourself … and the attorney really seems like it makes it more serious for students.”

However, Senator-at-large Lexi Duncan shared concerns for those who may face severe anxiety during the adjudication process.

“I’m a little split … I do kind of worry about, what if someone with severe anxiety was to go in front of the board?” said Duncan, a sophomore psychology major. “They wouldn’t be able to properly defend themselves … I’d be interested to see if [they’d] make an exception.”

The resolution regarding proposed changes to the threshold of evidence, authored by RHA President Steve Chen, was struck down.

The proposal would change the current evidence threshold from “clear and convincing” to “preponderance of the evidence,” a lower standard, in student conduct proceedings. This change aligns with Association of Student Conduct Administration recommendations as well as policies at other University System of Maryland and Big Ten institutions, according to the resolution.

“I asked the Office of Student Conduct if when other schools changed from [clear and] convincing to preponderance of the evidence if they saw an increase in students held responsible or students charged with something,” said Chen, a senior biology and individual studies major. “The answer was no.”

The resolution about language and definition changes in the code, also authored by Tadmor, passed.

The Code of Student Conduct is currently a “very legalistic” document, and these changes would make it “easier for students to understand,” Student Conduct Director Andrea Goodwin said during a presentation at the Feb. 28 RHA Senate meeting. It also aims to remove about 50 footnotes in an attempt to reduce the inconvenience of flipping to the back of the code to get context for the footnotes, she said.

Resident Life Associate Director of Student and Staff Development Steve Petkas presented on behalf of the Joint University Senate/Presidential Task Force on Sexual Assault Prevention to share new recommendations that resulted from his work on the task force.

One of the recommendations would mandate sexual assault prevention training for the leaders of recognized student groups, he said. The task force plans to finalize their recommendations on Thursday, and provide their report to the University Senate Executive Committee on Friday, he added.

The president and vice president candidates are Rodriguez, current RHA Student Groups and Organization liaison, and Tzvi Glazer, senator-at-large, respectively. They are both running unopposed, and elections will take place at the next senate meeting on April 11.