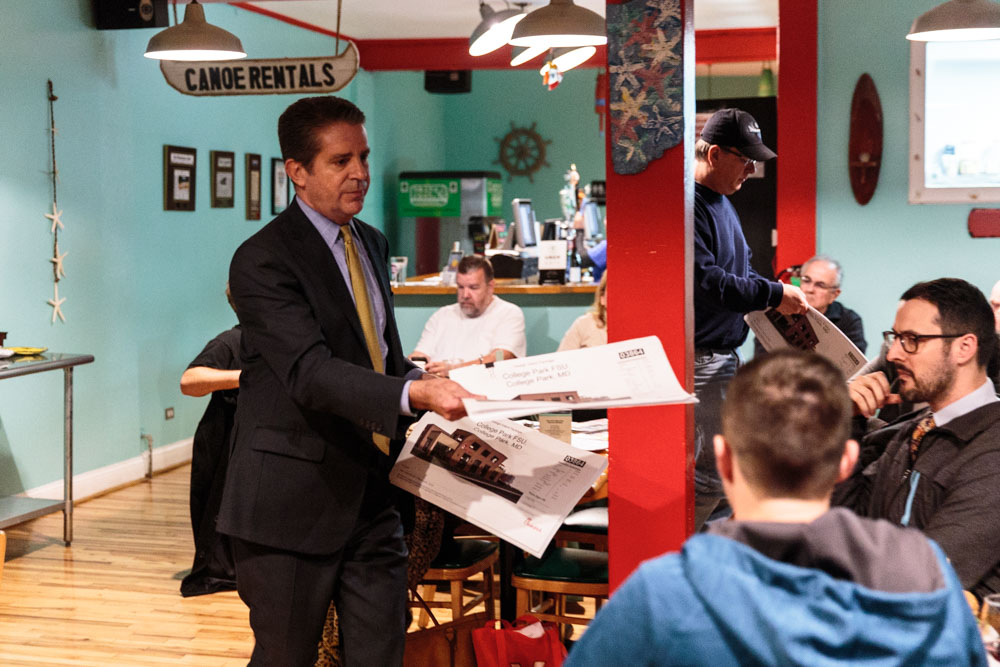 College Park residents expressed mixed feelings during a community meeting Thursday night about a potential new Chick-fil-A in the city, citing concerns about increased traffic and developing another fast-food chain in the area.

More than 30 residents and several city officials met with company representatives at a Berwyn District Civic Association meeting to discuss the proposed location at 8907 Baltimore Ave, where the Cass Trailer Sales is located across from Rita’s.

Chick-fil-A has been “seriously looking” to build in College Park for about four years, said Dan Lynch, a local attorney hired by the company. The fast food chain intends to propose a two-story building with more than 4,600 sq. feet of space, along with an outdoor patio space, according to a Design Intent Package distributed during the meeting.

[Read more: Another Chick-fil-A is coming to College Park — maybe]

Prince George’s County must approve the property’s stormwater concept plan before the company can begin discussing a detailed site plan with the city, Lynch said. But company representatives wanted to hold a public meeting to gauge the community’s support, as they “may not proceed without it,” Lynch added.

Some residents questioned whether College Park needs another fast-food restaurant on Route 1, and said a drive-thru at the site would create additional traffic. Others raised issues with the site location’s proximity to a College Park Veterans Memorial, located at the corner of Greenbelt Road and Route 1.

District 4 City Councilwoman Mary Cook, who formerly served as a chair of Veterans Memorial Committee, said there are better places to build this sort of development. During the meeting, Cook also said members of the veterans’ committee were discouraged to hear about this proposal.

“I think a fast food restaurant next to the memorial, I find that disturbing as one whose father was a career military,” Cook said. “I know others may not agree with me, but I find it disrespectful.”

Resident David Redzensky, said he lives about two houses down from the proposed location, and is concerned that developing the property could increase traffic and drive down the value of his home.

“I don’t like it,” Redzensky said. “The traffic is one thing [and] traffic is already bad enough there.”

In response to this concern, Lynch said this proposal could actually benefit residents living on Branchville Road — next door to the restaurant­ — as the company would propose street lights along that street.

“The city supposedly is trying to become more walkable, and I think a drive-thru restaurant is the epitome of the opposite of that, a car-centric opposite,” Koch said. “I really feel for the people who live right there in Branchville, I would hate something like that in my backyard.”

Despite these concerns, Harry Pitt, another Berwyn resident, said he thinks this property would be a good addition to the city and attract more people to the area.

“It’s a great organization,” Pitt said. “I like they way they train their people. Their buildings are upscale. . . we have other fast food [places] on the boulevard so I don’t see a problem.”

Diane Jeffries said she loves Chick-fil-A, but thinks this location may not be the best choice for the city or for the company.

The city’s Route 1 sector plan, which lays out the future vision and design of the Route 1 commercial corridor, does permit drive-thrus, said Terry Schum, the city’s planning director, but not at the proposed Chick-fil-A site. The plan prohibits drive-thrus near residential areas and south of Delaware Avenue, in an effort to make that part of the corridor more walkable. Adding a drive-thru here would go against the city’s overall vision of walkability, but if there is ‘overwhelming support” for the project, the city could revisit its policy, Schum said.

“Maybe that warrants an amendment to the [sector] plan,” Schum said. “It would be an exception to look at plan like this because it doesn’t match up with the vision. Could you make it work? Yes. Have they tried to make it work? Yes.”

If the county approves the site’s stormwater management plan, the company will continue to discuss the development with the City Council and College Park residents. There is currently no projected timeline for the development of the site.