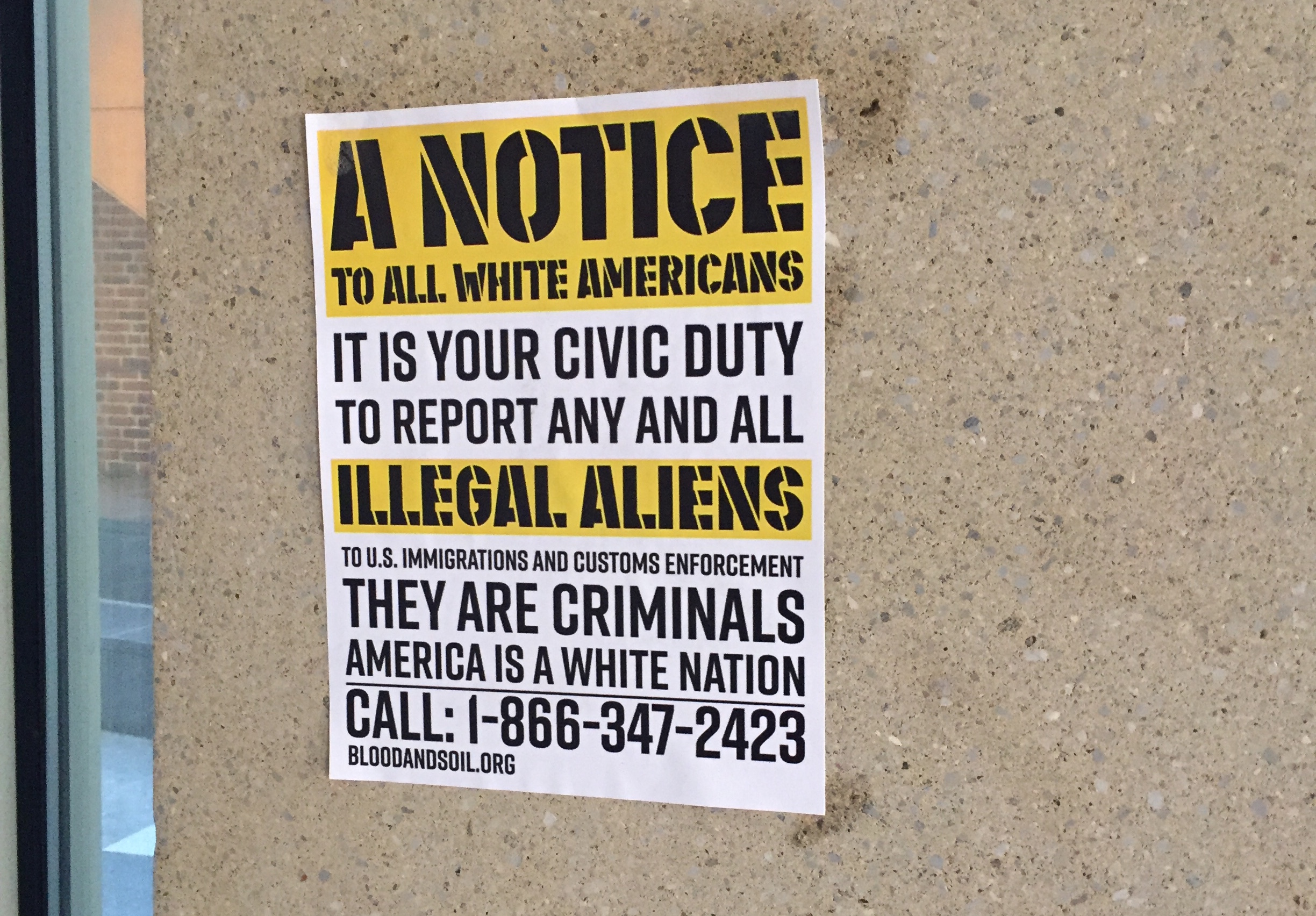 By Jessie Campisi and Talia Richman

University of Maryland Police responded to white nationalist posters at four locations on the campus Monday.

This is the first time police have been called about these kinds of fliers since December, when white nationalist posters were reported at Marie Mount Hall, Tydings Hall, the Lee Building and LeFrak Hall.

Two posters glued to a wall on the Chemistry Building directed students to the website of Vanguard America. The group’s manifesto states, “Our America is to be a nation exclusively for the White American peoples.”

There were also similar posters reported at the Jeong H. Kim Engineering Building, in the courtyard between the A.V. Williams Building and the Computer Science Instructional Center and on a dumpster outside of Symons Hall.

A white nationalist poster found in the Chemistry Building on Monday. (Photo courtesy of Osvaldo Gutierrez)

At about 9 a.m., professor Osvaldo Gutierrez and his wife saw the posters hanging on the Chemistry Building wall. Gutierrez immediately approached professor Jeff Davis, who called University Police, he said. The posters have since been removed.

One poster read, “A notice to all white Americans: it is your civic duty to report any and all illegal aliens to U.S. Immigration and Customs Enforcement. They are criminals. America is a white nation.”

“You hear about this stuff on the news, but I never really imagined it happening here,” said Gutierrez, who is of Mexican descent. “It’s really disturbing, and it’s not something you want to see, especially as a person of color.”

The remains of one of the white nationalist posters that was taken down. (Jack Roscoe/The Diamondback)

Though the words on the fliers are protected free speech, Hoaas said, “you could still see there’s a bias in there.”

“Chief [David] Mitchell is aware and is very concerned, as we all are,” Hoaas said.

Members of the campus community, such as the Office of Diversity and Inclusion, were notified of the incident, Hoaas said.

Some of posters reported in December referred students to the website of American Vanguard. The group is now known as Vanguard America, said Marilyn Mayo, a research fellow at the Anti-Defamation League’s Center on Extremism. The white nationalist organization told The Diamondback in December via Twitter that two university students hung up the fliers. Other posters directed people to The Right Stuff, another white nationalist blog.

White supremacists have been targeting college campuses at unprecedented levels, according to the ADL. There have been 107 flyering incidents since September, as of March 6.

“White supremacists, emboldened by the rhetoric of the 2016 presidential campaign, are stepping out of the shadows and into the mainstream,” the ADL wrote in a news release.

This university released a general response on Dec. 14, affirming that, “As an institution of higher education, the University of Maryland is committed to the core values of diversity and inclusiveness and do not condone hateful language. Even in difficult situations, however, we honor the right to freedom of speech.”

The administration was not immediately available to comment on the latest incidents.