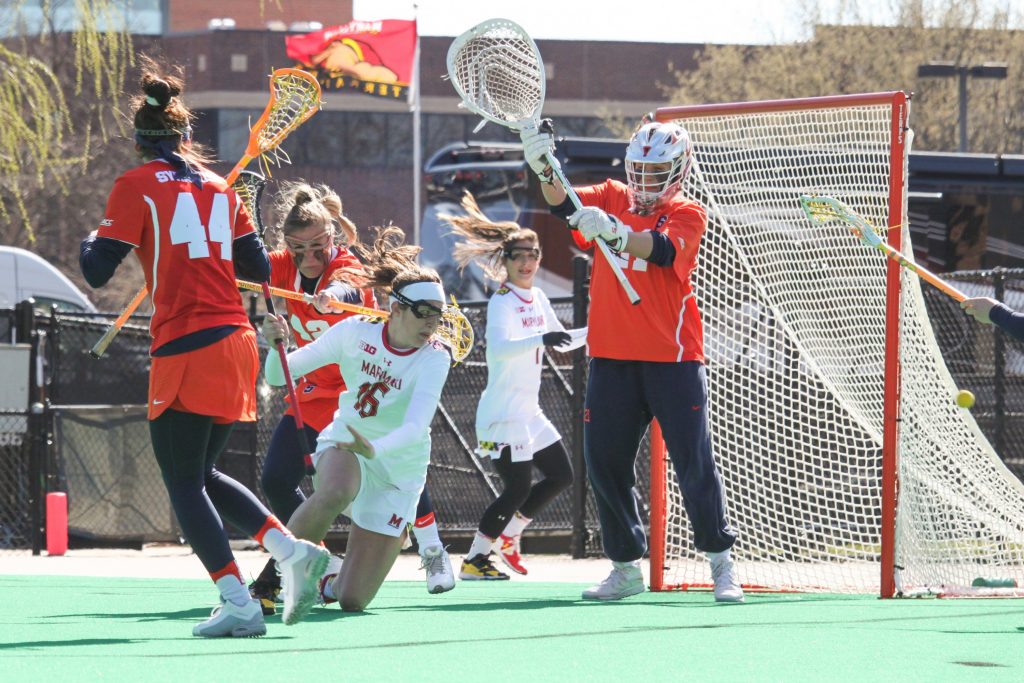 Before facing Syracuse on Saturday afternoon, the Maryland women’s lacrosse team stood in a straight line and watched as the Orange players circled up and had a dance-off.

About 19 minutes later, the Orange returned to the spot, dejected, for a timeout.

Before the pause, the No. 1 Terps (6-0) didn’t allow No. 4 Syracuse (7-1) to score for almost 14 minutes. That drought extended another six as the Maryland defense stifled a Syracuse attack that averaged almost 15 goals entering the game.

Meanwhile, attacker Megan Whittle had just scored for a 9-2 lead. Syracuse had allowed an average of eight scores per game, but the Terps broke its defense to boast a 17-7 victory at the Field Hockey and Lacrosse Complex.

“Our motto is ‘Expect nothing, be ready for anything,'” Whittle said. “We weren’t sure what they were going to throw at us … All in all, we were really well-prepared for this game.”

Neither registered a point.

The Maryland defense capitalized on 18 Syracuse turnovers to equal the second-lowest goals total the unit has surrendered in a game this season.

“All together, our defense played well,” coach Cathy Reese said. “It was a short week for us coming off of Boston College on Wednesday, and we focused a lot on the things that Syracuse likes to do — a lot of two-man plays and picks. I thought our defenders did a nice job down there.”

After a 21-goal performance on Wednesday, the offense continued its groove and confidence. Hartshorn attempted a behind-the-back shot in the second half that just missed wide, while Whittle scored once by scooping and shooting the ball in one motion with little glance toward the net.

“Shooters shoot, and everything was falling today,” Whittle said. “We executed our offense really well against a zone. We moved the ball really well. We finished a lot of shots, and it was a good day for all of us.”

The Terps also received a career-best showing from goalkeeper Megan Taylor. After conceding 13 goals to the Eagles on Wednesday, the sophomore made 18 saves. Her previous high was 11.

Syracuse converted one of its 13 free position shots.

Taylor attributed her steadiness to the offense’s performance. Seeing moments like Hartshorn attempting a behind-the-back shot, she said, gave the defense a boost.

Plus, when Taylor’s backline counterparts are gelling, she appreciates the benefits.

“It helps when I have, in my opinion, the best defense in the nation,” Taylor said. “They’re making my job so much easier.”

The victory is Maryland’s second over a top-four opponent this season. The Terps beat then-No. 1 North Carolina, 13-10, on Feb. 25, and Reese is enjoying the progress she’s seen during the first six games.

“We’ve got a great energy right now,” Reese said. “They’re playing together really well. They’re learning from each other and working together well. It’s a really cool thing right now that we’ve got going on with our team.”