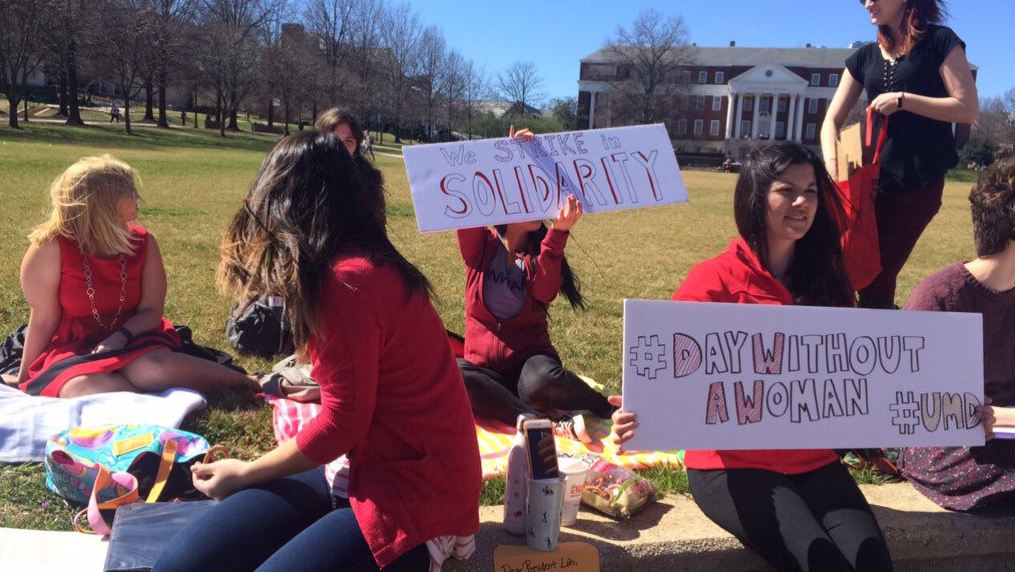 By Natalie Schwartz and Lindsey Feingold

A few things were missing at the University of Maryland on Wednesday: some professors, students and an entire department.

The women’s studies department closed Wednesday in support of the national ‘Day Without a Woman’ strike, which protested against gender inequality and workplace discrimination. The event called for women to take the day off from all paid and unpaid labor, and urged those who couldn’t take off to wear red in solidarity and to only shop at women- and minority-owned businesses.

Some university faculty also spent the day outside of the classroom, such as communication professor Kristy Maddux, who decided to join the strike on International Women’s Day because she saw the potential for this movement to “make a bold statement” against wage gaps between men and women. She missed teaching her class on feminist history and scheduled an alternative assignment for that day.

[Read more: UMD DOTS and Dining Services are preparing for the ‘Day Without a Woman strike’]

It is unclear how many university staff and faculty women participated in the strike, but Maddux noted she knew one or two other professors who were participating. Neighboring K-12 school systems in the Washington area, including Prince George’s County Public Schools, did not hold classes Wednesday, citing a lack of staff to properly operate.

Maddux said she has no way to know if she or any other female faculty will face blowback from the administration for their decision to take leave.

Provost Mary Ann Rankin sent an email — with the subject line “Expectations for Faculty Attendance” — to university faculty and staff at about 3 p.m. Tuesday reminding them of obligations to come to work.

“Students enroll in courses, and departments schedule course teaching assignments, with the expectation that the classes will be taught by the assigned faculty members,” Rankin wrote. “Faculty are, therefore, expected to convene all classes for the entire stated time.”

In the case of “unavoidable faculty absence,” Rankin noted faculty have options to reschedule class meeting time, arrange an alternate method for teaching the class or having another faculty member teach the class.

Staff and faculty weren’t the only ones participating in Wednesday’s event. Some university students organized a strike on McKeldin Mall from 12 to 2 p.m., which drew about 20 participants.

Nora Murphy, a communication graduate student and one of the organizers of the university event, said her peers decided to create a protest on the campus because “we heard about this international movement and we thought it would be great for folks on campus to participate.” Faculty and students at the protest created posters and signs and also wrote letters to university President Wallace Loh, as well as various senators and congressmen.

“In many ways the university exemplifies the problematic conditions we are striking against,” Hess said. “The university runs on the exploitative labor of underpaid graduate, undergraduate and adjunct faculty and it also relies on unpaid emotional labor of all women faculty and faculty of color.”

“Emotional labor” involves all the ways women and minority faculty are expected to help their female minority students navigate both their academic work and the “conditions on campus, which can be difficult” for them, Hess said. These types of faculty members are also expected to talk to students about how to deal with sexism in academia and in the workplace — labor that’s “not expected of their white male colleagues,” she added.

Because some groups could not take off work to strike — for example, international students could lose their visas if they take leave — campus strike organizers raised awareness through social media on alternative ways people could participate, such as wearing red. The organizers gathered a group of male allies who agreed to act as substitutes for any classes women would miss, and posted an alternative out-of-class assignment that asked students to learn about and write about a historical strike on its Facebook page as an option for teaching assistants to give to their students.

Luke Capizzo, a communication doctoral student, offered to substitute for any women who wanted to strike because he’s seen “the unjust ways and distinctions between how men and women are treated,” he said.

“It’s up to each of us to seek out the ways that we can help,” Capizzo said. “This day is just one day, but it’s a small part of a larger process of raising awareness and taking action so we can improve this university campus and this country as a whole.”

Sophomore Devorah Stavisky heard about the protest from her communication professor. She participated by writing a letter to Loh.

“I am writing President Loh to thank him for his continued support to diversity at this university, but also to remind him that commitment to diversity at this school doesn’t just happen by saying we are diverse, but by actually following through on implementing policy,” the sociology major said.

Jade Olson, a communication doctoral candidate and Oral Communication Center director, created and held up a poster that said “we strike in solidarity” during the protest.

“I think it’s really important that we demonstrate solidarity with working women, with women of all backgrounds and classes, and especially solidarity with women who are not able to participate in the strike today,” said Olson, who planned on attending a Washington protest as well with a few of the other protesters.

While Sarah Berman, a senior community health major, attended the protest to show women are important at this university, she said she was disappointed at the turnout.

“If all of the women who worked here decided to come, it would be chaos,” Berman said. “The turnout is definitely disappointing, I thought there would be way more people out here, because on the day of the [November] walkout, there were hundreds of people here.”

Berman added that “the rhetoric that has come out of the election and from Trump is not okay and makes people feel like they can say it as well … so doing things like this, whether or not there is a big turnout, needs to keep happening.”

The strikers concluded their protest by placing handwritten letters to Loh in an envelope and walking them to the Main Administration Building.

“I believe these kinds of events are important for our community, especially during this time in our country,” said Lanre Faderin, a senior biology major. “So many people have gotten comfortable with the accomplishments women have already made in this country, yet there is still so much more progress that can be made.”

CORRECTION: Due to a reporting error, a previous of this article misquoted communication doctoral student Morgan Hess. Hess was referring generally to the emotional labor that women and minority faculty often face — not her own personal experiences. This article has been updated.