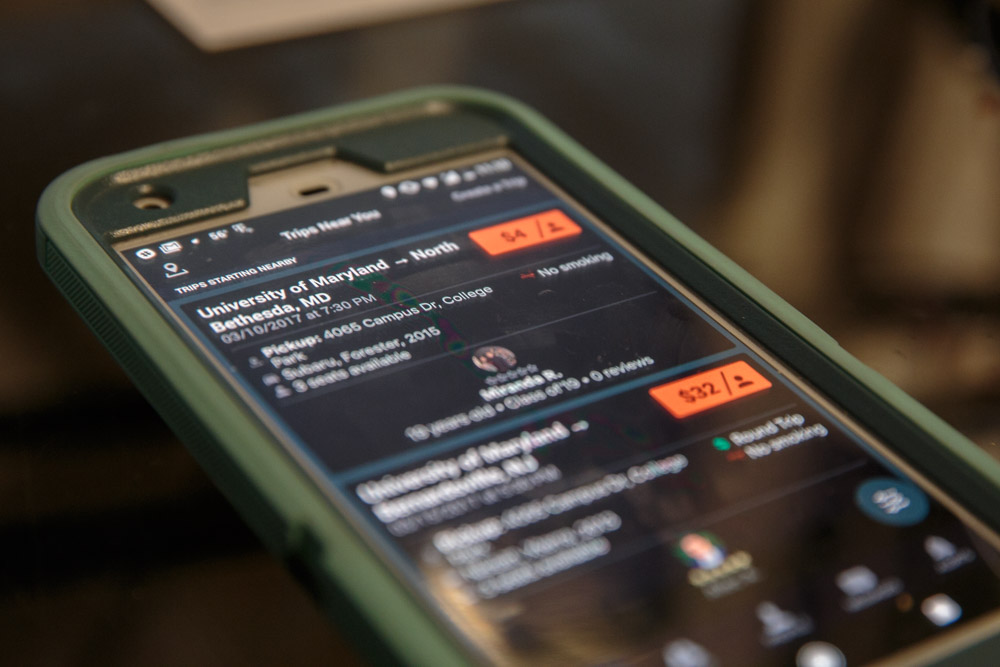 College students without cars now have another ride-sharing option, thanks to an app a University of Maryland student developed.

Alec Aronwald, a sophomore accounting major, launched CarPo on March 1 after almost a year and a half of planning and developing the app with his family. Unlike apps such as Uber or Lyft, which allow you to plug in your own pickup location and dropoff destination, CarPo lets students hitch a ride with other peers who might be traveling somewhere they’re interested in going.

The idea for CarPo came to Aronwald his freshman year in response to his friends constantly asking him for rides when he would drive to his home in New Jersey. Through the app, students looking for rides to and from their hometowns and colleges are able to see registered students with cars who are already driving to the same place. Drivers who create trips and give rides to passengers are reimbursed for their expenses through the app using debit and credit cards, and CarPo takes a portion of that as a service fee, Aronwald said.

Aronwald said he estimated that an Uber trip from this university to his home in New Jersey would cost more than $250 depending on what type of Uber is taken, adding that the same 200-mile trip would only cost about $31 as a CarPo passenger.

“I’m hoping CarPo can basically be a new means of transportation that helps college kids get to where they need to go,” Aronwald said.

The app is free to download through Apple’s app store and Google Play, and is compatible for iPhone and Android devices. CarPo has been downloaded approximately 1,000 times since its release a week ago, he said.

Taking trips on CarPo would help ease students’ reliance on public transit or their parents to travel, and the carpooling services CarPo provides could help cut down on the need for cars on the campus. This university’s Department of Transportation Services has expressed interest in CarPo for this reason, although it does not officially endorse the app at this time, DOTS spokeswoman Anna McLaughlin said.

McLaughlin said she believes CarPo could serve as an asset to the university, especially because freshmen residents next fall won’t be able to register a car for campus parking because of growing construction projects.

“It appears to be something that is not going to become outdated or disappear when he graduates or leaves the university,” she said.

Seven development projects at this university will account for about 2,700 parking spots being eliminated by fall 2018. There are about 500 freshmen resident parkers on the campus who will be unable to park on the campus next academic year.

McLaughlin said she was impressed by Aronwald’s preparedness and ability to address any safety or payment concerns she’s brought up to him. Drivers have to include pictures of themselves and their cars and receive reviews on the app to make the experience as secure as possible, Aronwald said. He noted that CarPo is also introducing an update that will require users to sign in through Facebook or with a university email.

Freshman bioengineering major Nidhi Kalaria is an in-state student who lives only 30 minutes away from the campus, so while she said she wasn’t against the idea of CarPo, she wasn’t planning on using it.

“There might be trust issues,” Kalaria said. “Parents wouldn’t want their kids just riding with other kids.”

John Walden, a junior computer science and music major, is in the opposite situation — he lives in Texas and flies home, preventing him from taking advantage of the service. But he said he believes students who live within driving distance would probably use the app, even if there are some worries associated with getting paired with strangers for long car rides.

CarPo is Aronwald’s first app, and while its release was a difficult process that took longer than he had originally hoped, Aronwald said he felt the experience was positive overall. Technology ventures are hard to put an actual deadline on, he added.

“[My family and I] wanted to make sure we came out with the perfect version before we released it,” Aronwald said.

Aronwald is currently in the second stage of the Dingman Center for Entrepreneurship’s three-stage Fearless Founders Accelerator program, where he got into contact with fellow students also starting their own businesses and with his professor who introduced him to DOTS.

Other initiatives and programs at the Dingman Center, such as Dingman Fridays or the Pitch Dingman competition, also serve as resources to any student looking to develop their own business ideas. The Dingman Center has provided assistance to many startups over the years, including Route One Apparel, JavaZen, VentureStorm and CardBuddy, which creates the stick-on phone wallets now ubiquitous all over campus.

“Pursuing a venture as a student is a very smart time in life to try it,” said Holly DeArmond, associate director of the Dingman Center.