For the first time in about 25 years, a Prince George’s schools CEO will get a second term 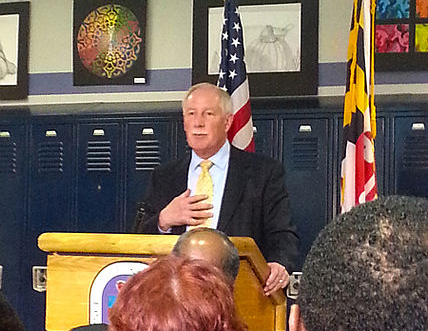 Kevin Maxwell, a University of Maryland alumnus, was appointed to a second term at the helm of Prince George’s County Public Schools.

“Our job is to make this school system the best it can be for every single child that walks through our door,” Baker said at a press conference Friday. “And at every moment of the time that [Maxwell] has been here, I have believed … that is his charge.”

In 2016, 81.4 percent of Prince George’s County high school seniors graduated — the highest percentage in its history. The county historically sends a large number of students to College Park, with 2,460 students enrolling at this university in fall 2016.

Since Maxwell took over, the county has expanded its language immersion programs in several elementary schools and now offers 50 pre-kindergarten programs, up from eight in 2013.

“You can look at several major outcomes,” Peterson said. “What’s up is up, and what’s down should be down.”

Numerous sexual and child abuse scandals rocked the school system since Maxwell took over. In the wake of one incident, where a teacher forced a 3-year-old boy to clean up his own urine, the federal government revoked a $6.4 million grant to the county, The Washington Post reported in September.

Prince George’s County Board of Education member Raaheela Ahmed, a 2015 university graduate, criticized Maxwell for his response to these scandals. The CEO didn’t go far enough to meet the needs of all the students in the system, she said.

Ahmed stressed the importance of being “proactive, instead of reactive,” which means “addressing inconsistencies or inadequacies within the system that are identified and doing that in a timely manner,” she said.

In October, the county’s branch of the NAACP called for Baker to remove Maxwell. The system had been through “one incident after another” and needed “someone to come in and put it back on track,” the branch’s president Bob Ross told The Post.

At his press conference Friday, Baker mentioned the scandals but said they didn’t affect his faith in Maxwell.

“You’re going to have bumps and stumbles,” Baker said. “The question is how you react to those things that go wrong. At every point of an incident that has happened in our school system, I have never lost confidence in [Maxwell].”

Before leading the school system, Maxwell spent 22 years as a teacher, principal and administrator within the county. Board of Education member K. Alexander Wallace wrote in an email that he admired Maxwell’s devotion.

“Other predecessors to Dr. Maxwell would have resigned from their position once times got hard or public outcry got tough,” Wallace wrote. “Dr. Maxwell’s dedication to his home county and home school system is something to thank and to support.”

Although his predecessors didn’t remain at their post for long, Maxwell said at his press conference that he’s enjoyed his tenure and that he plans to stick around.