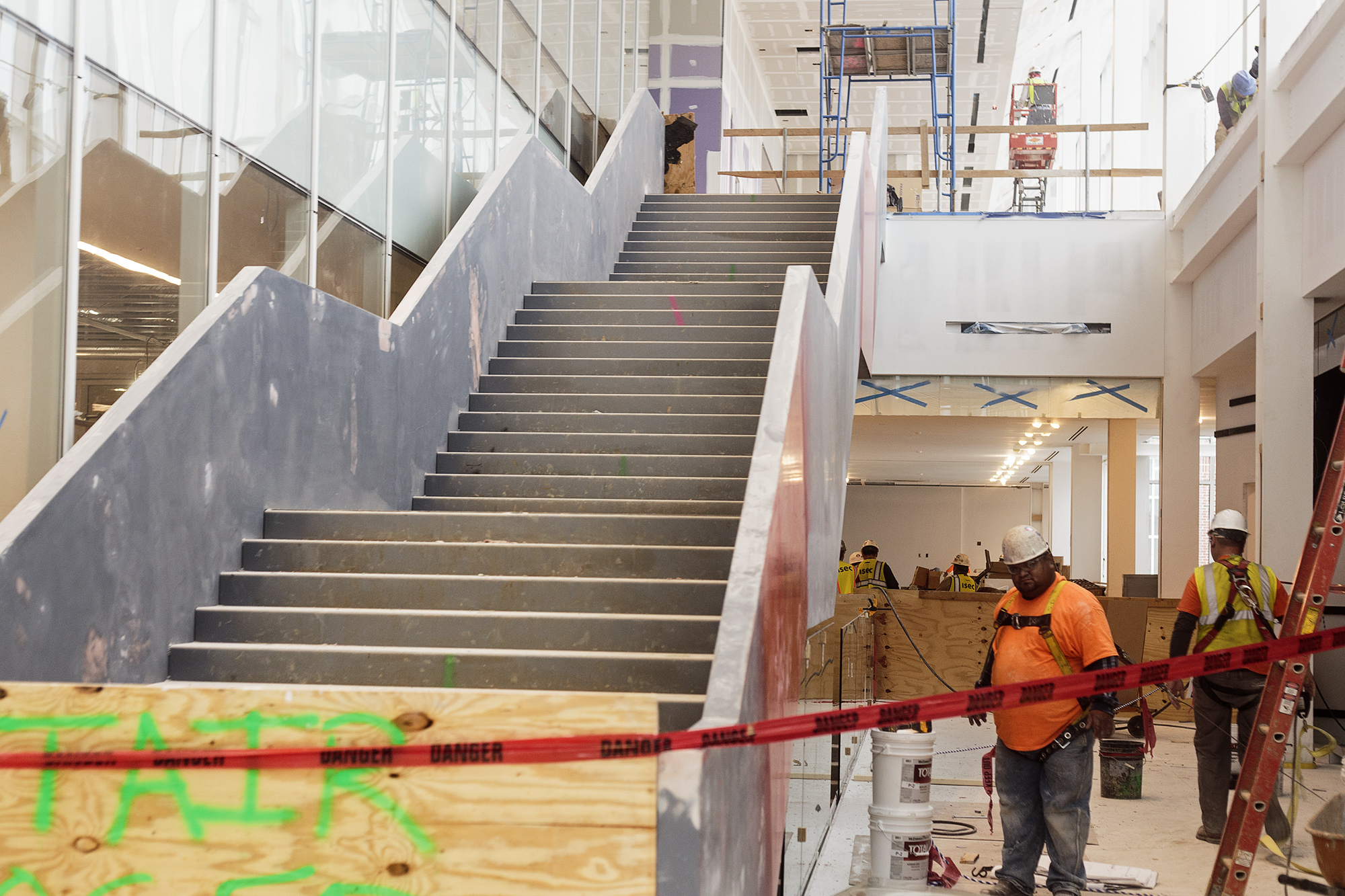 After about three years of construction, the University of Maryland is gearing up for the final stages of building the Edward St. John Learning and Teaching Center.

The newest academic building on McKeldin Mall in 50 years was scheduled to complete construction Dec. 31, said Bill Olen, executive director of planning and construction. The center is now set for completion by the end of March, Olen said.

The completion date was extended to December after administrators decided in June that the campus would hire a contractor to install the audio and visual equipment, including computers, projection screens, monitors and speaker systems, Olen said. The equipment, which costs about $4.5 million, is being installed, Olen said.

But even after construction is over, the center will need a few more final touches before it can open.

“Once the winter is over, we will finish landscaping and exterior work,” Olen said. “We expect to finish final landscaping around March, and furniture and equipment for the labs should be delivered sometime in April.”

The center is still scheduled to open on time for the summer 2017 session, beginning May 30, despite delays.

This university has dedicated a wing of the center, consisting of nine labs, to the chemistry and biochemistry department. The 12 remaining classrooms are for general purposes, allowing all campus programs to request to use space. The Provost’s Office has scheduled a number of courses that will be taught in the new classrooms in upcoming semesters.

The center features three different models of TERP Classrooms, which are modernized classrooms that promote collaboration, many of which can be found in existing buildings such as the Mitchell Art-Sociology Building, Tawes Hall and H.J Patterson Hall on the campus. The classroom setup is meant to support team-based and collaborative learning, aiming to defy the traditional lecture hall style, Hilary Gossett, assistant director of academic facilities, said.

“We’re hoping to usher in a new innovative way of thinking about how we teach and learn on our campus,” Gossett said.

An additional wing of the center, formerly known as Holzapfel Hall, will provide office space for the Academy of Innovation and Entrepreneurship, the Teaching and Learning Transformation Center and the Division of Information Technology’s learning technology designers, who help integrate instructional technology into courses at this university. The old Holzapfel Hall is connected to the center through a glass breezeway.

“It’s really a neat bridge between the old and the new,” Gossett said.

The collaborative classroom styles in the new center lend themselves well to what the academy is trying to teach — innovation and entrepreneurship classes in the new center for students of all majors, said Ben Bederson, the center’s executive director.

Officials hope the Teaching and Learning Transformation Center, which currently resides on the fourth floor of McKeldin Library and aims to help students improve their teaching skills, will start moving into the St. John center shortly after spring break, Bederson said.

The center has a wide range of offerings, from hour-long workshops to year-long courses for professors who seek to become more effective in teaching students.

“Our job is to teach faculties how to take advantage of these classrooms in order to be the most effective teachers that they can be,” Bederson said.

The academy’s use of the new space aims to fulfill university President Wallace Loh’s request to integrate elements such as creativity, innovation and an entrepreneurial mindset throughout all programs and buildings on the campus.

“Loh wanted the academy to give students across a range of majors the opportunity to take classes that build these creative problem solving and innovation skills,” Bederson said.