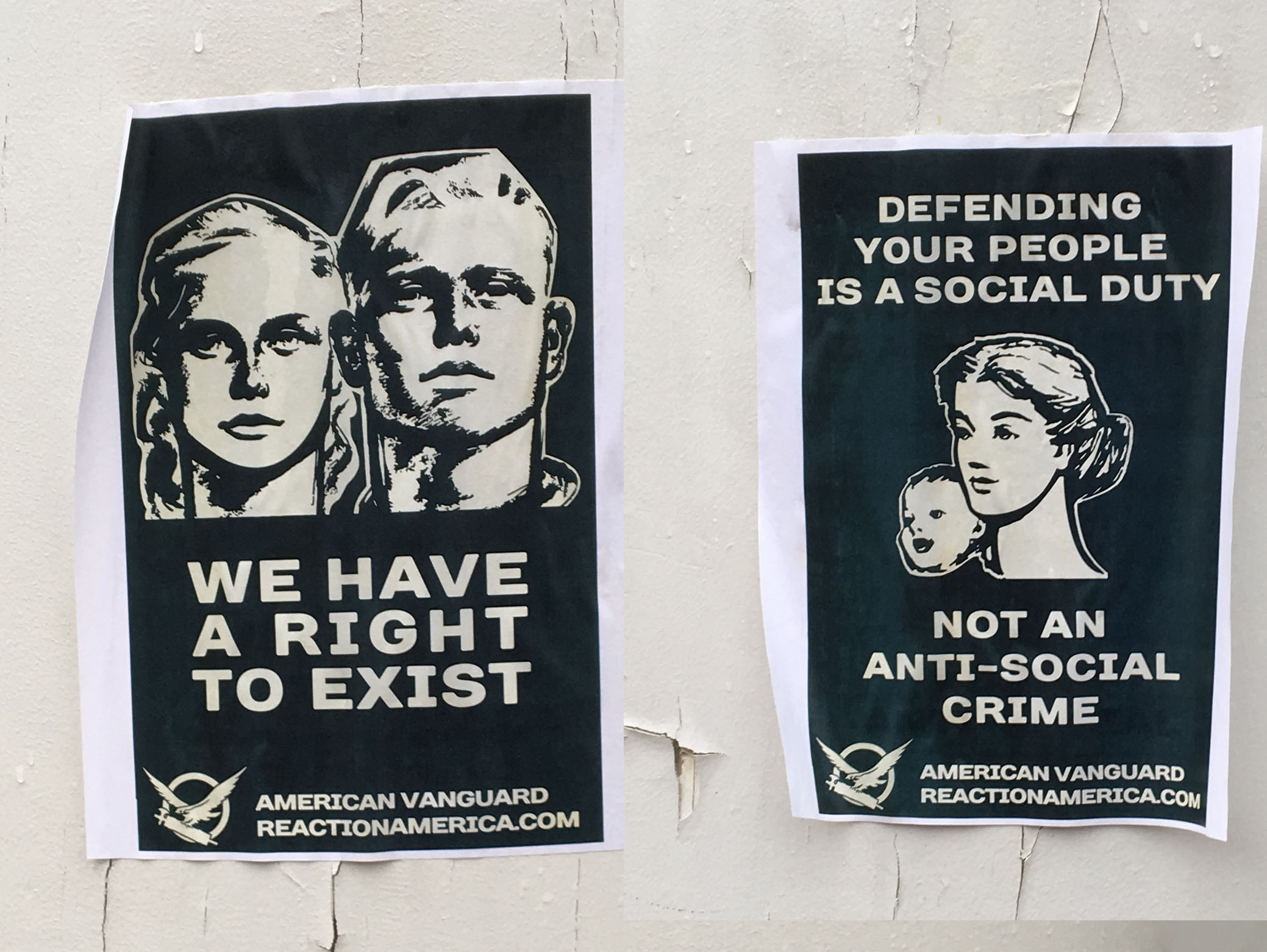 By Ellie Silverman and Talia Richman

White nationalist posters have been reported to the University of Maryland Police Department twice in the last 24 hours.

Sunday night, University Police responded to a call around 11:30 p.m. regarding posters glued to Marie Mount Hall’s doors. Monday morning, police were called to Tydings Hall. The posters have since been removed.

The posters outside Tydings direct readers to the website of white nationalist group American Vanguard. The group’s manifesto states, “We want to be at the forefront of the reawakening of White racial consciousness.”

One of the posters glued to a Tydings’ column read “Defending your people is a social duty not an anti-social crime.” Another showed two Aryan-looking people above the words, “We have a right to exist.”

The posters at Marie Mount also referred people to American Vanguard, in addition to a blog published by the National Policy Institute, a white nationalist organization.The institution held a rally in Washington following Donald Trump’s victory, during which attendees used Nazi salutes.

“There’s no hate speech or threatening language telling people to do harm to any group. This is just speech,” Hoaas said. “It’s vandalism in the fact that whatever glue they used to stick it to the doors caused damage when they got removed.”

Hoaas said police are reviewing cameras in the area and the investigation remains open.

University Police are continuing to investigate whether there was a “hate bias element,” Hoaas said Wednesday.

Jessica Goldberg said she was shocked to find the posters on the columns outside of Tydings as she walked to her office this morning at about 9:26 a.m.

In her six years at the university, the economics professor has never seen anything like this.

“This sort of behavior or sentiment, anti-Semitism, racism, xenophobia, just outright racist positions were understood to be unacceptable so I certainly did not expect to see them on a college campus,” Goldberg said.

“There’s a difference between freedom of speech and the promotion of overtly racist ideology and I think, the campaign and the election have changed social norms,” Goldberg said. “It’s very important the university and people who make up this university push back and say this is not normal.”

Angie Harmon, a coordinator in the economics department, filed a report with the Title IX office and the University of Maryland Police Department Monday morning.

“I was in shock,” Harmon said. “The University of Maryland is, I think, a pretty liberal campus but also one that really makes a lot of efforts to make sure religious minorities and people of color are respected here. This wasn’t the place I was expecting to see something like this.”

There has been “reported increase in bias incidents and discriminatory conduct” at this university, according to a Nov. 17 campuswide email from Title IX Officer Catherine Carroll and Chief Diversity Officer Kumea Shorter-Gooden.

These two instances fall in line with reports of hateful vandalism across the state and country. There have been reports of swastikas drawn in Montgomery County schools and a sign outside a Silver Spring church was defaced with the words “Trump Nation. Whites Only.”

Harmon is calling on the administration to respond to incidents.

“The university should make a statement saying this is not appropriate action and to reaffirm the safety of people of color and religious minorities on this campus,” she said.

The university issued a response Wednesday: “As an institution of higher education, the University of Maryland is committed to the core values of diversity and inclusiveness and do not condone hateful language. Even in difficult situations, however, we honor the right to freedom of speech.”