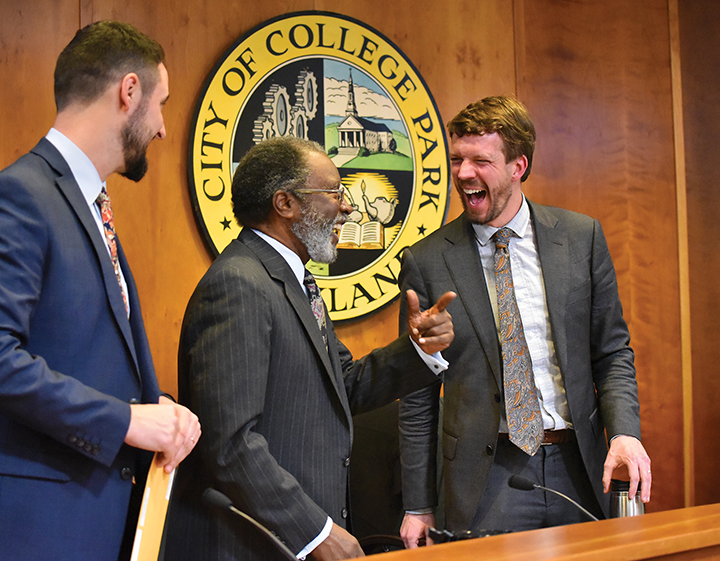 Newly elected mayor Patrick Wojahn (right) jokes with mayor pro tem Monroe Dennis at the Inauguration of the 2015-17 Mayor and Council on Dec. 7, 2015 in City Hall.

By Carly Kempler and Talia Richman

With his left hand raised and his right hand on a bible held by his husband, Patrick Wojahn was sworn in as College Park’s mayor on Dec. 7, 2015.

In the one year since he took office, Wojahn has made strides on many of the goals laid out in his campaign. From working toward uniting a divided city council to implementing new safety and sustainability initiatives, Wojahn said he is proud of the city’s progress since he took office last year.

And with College Park in the midst of revitalization projects ranging from a new hotel to engaging music and dining experiences, the momentum isn’t slowing down.

“We’re going to continue to move forward on transforming the city,” Wojahn said. “Things will really transform over this next year, and I’m excited to see where it goes next.”

Wojahn defeated former District 4 Councilwoman Denise Mitchell with about 57 percent of the vote in one of the most competitive city elections in decades. The 2013-15 council members had been evenly split on which mayoral candidate they endorsed.

In the moments after Wojahn’s victory was announced in November 2015, District 3 Councilman Robert Day said Wojahn had “a big job ahead of him — and that’s bringing the council together.”

A year later, “Patrick’s done a wonderful job,” Day said Tuesday. “He’s been faced with some unique challenges. We’re in a very, very big growing period — he’s had to manage that and us at the same time. He’s met the challenge.”

Immediately after he was elected, Wojahn said he reached out to each council member to go over their individual priorities for their districts.

“We continue to have our differences, our disagreements on some things, but I think as a whole, the council this year has been pretty solid on working together and moving forward on things that we can agree on — finding compromise,” Wojahn said.

Still, he noted he’s had to break the tie on several divided votes this year. Council members have disagreed on how to distribute grant funds and how to award contracts, and there were long discussions about whether City Hall should fly the gay pride flag during Pride Month this year. Wojahn is this city’s first openly gay mayor.

Cook said the council has developed “a working relationship,” but still must strive toward being a more effective governing body. The group went to The Board and Brew together last Saturday for lunch and to “establish some camaraderie,” she said.

“I don’t think we’re united, but I don’t think we’re as divided as we used to be,” Cook said. “We’re all representing different interests. … I feel like more understanding has to be given to the needs of residents in the northern and western parts of the city.”

Wojahn has aimed for unity both among the council and among residents. He started the One College Park Coalition, which stemmed from discussions with residents following the Orlando nightclub shooting and Black Lives Matter protests nationwide. The group, which first met in October and has held two meetings, looks to create a “strong community out of the diversity that exists,” Wojahn said.

“We decided to have a conversation about how we can make sure we’re responding to issues around diversity and giving people a safe place to come and talk about some of the national challenges [that] are taking place and how we’re addressing this in College Park,” he said.

Part of Wojahn’s campaign platform in 2015 stressed the need for improved communication between the city and its residents. Working toward this goal, Wojahn created a weekly mayoral update, which is sent via email as well as on his social media platforms, such as Facebook and Twitter.

Somers has also cited communication as “one of the biggest successes” during this council’s first year, adding he thinks the improved social media presence is helping the city reach a “broader audience.” Somers and the council are also working on software — likely a smartphone app — that would allow residents to report problems such as potholes or downed wires and then track their service request as its completed, Wojahn told The Diamondback last month.

Wojahn has also continued to foster collaboration between the city and the university.

“I’m happy with the progress,” said Administration and Finance Vice President Carlo Colella. “We’ve had a good start, and credit to Mayor Wojahn and the folks whose shoulders we stand upon, as we continue to make this a great place to live, to work, to study and to recreate.”

Through the university partnership, Wojahn has made strides on another one of his campaign promises: improving safety in the city.

In May, the city and this university announced a collaborative Safety Ambassador Program, which started with six ambassadors and expanded to 15 safety ambassadors in its first six months. The program focuses on improving the city’s safety, as well as the overall presence of University of Maryland Police.

“We’ve accomplished a lot through the work of the City-University partnership and we continue to look for opportunities to capitalize on that partnership between the city and the university to serve College Park residents as well as students and faculty and staff and other visitors to the city,” Wojahn said.

That partnership has also helped propel Wojahn’s goals of making College Park greener. In May, the city and university launched a joint bike-share program, with 14 stations and 120 bikes located around College Park. Wojahn rode one of the Zagster bikes around the campus as part of the initiative’s grand opening.

Fulfilling the mayoral role has been “more of a time commitment for Patrick,” said Wojahn’s husband Dave Kolesar, noting Wojahn likely spends about 30 hours a week on his position in addition to a 40-hour-a-week job as director of government relations at the Rails-to-Trails Conservancy. But he’s always “an optimist,” Kolesar added.

“How he interacts with people in the neighborhood and across the city and with stakeholders, organizations and things like that … Patrick is very much willing to listen to everyone,” he said.

The city and university’s goal to achieve the University District Vision 2020, which aims to make College Park a top-20 college town within the next four years, is also reaching fruition through various ongoing development projects throughout College Park.

Most notably, the downtown area is going through a revitalization effort, with properties such as MilkBoy+ArtHouse, The Hotel and its accompanying restaurants and retail, and the Arts and Entertainment Hall all slated to open sometime next year. The Art House, a university-city collaboration that will serve as a restaurant and live music venue, could join the Route 1 dining scene as early as spring break, and The Hotel and arts and entertainment hall could open as early as next spring.

And in May, the College Park Foundation announced a $110 million redevelopment project that would include new retail space, upscale housing and restaurant space near the southern gate of College Park where the Quality Inn and Plato’s Diner currently stand.

These projects go along with Wojahn’s campaign statements that promised “high-quality restaurants, parks, shopping and arts and entertainment for all College Park residents.” District 3 Councilwoman Stephanie Stullich said projects such as the Art House will “really provide something that is unique and exciting and very college town-like.”

Wojahn said he’s most proud of the city and state’s approval of RISE zones in College Park. The program allows commercial businesses close to the university to receive tax breaks of varying percentages over a five-year period. The city’s application applies only for commercial development and does not include retail businesses, grocery stores or hotels.

“It’s going to have a transformative impact in the university’s campus and the research park,” Wojahn said.

Local business owners such as David Engle, who recently opened a food truck along Route 1 and at the M-Square Research Park, said the city has been very “welcoming” and “inclusive.”

“One of the reasons why I keep my business in College Park is because of Mayor Patrick Wojahn and all of the city council,” Engle said.

Wojahn’s first year as mayor wrapped up as a divisive national election came to a close. While Wojahn said he does not yet know exactly how President-elect Donald Trump’s policies will impact College Park, he’s optimistic about the future of this city.

Kolesar said his husband’s leadership is a stark contrast to what’s played out on the national stage.

“It’s kind of rare in politics,” Kolesar said. “Of course I’m biased in saying this, but I really do believe that he’s one of the decent people who’s in office right now.”