After a divisive election, Wallace Loh reaffirms value of diversity at UMD address 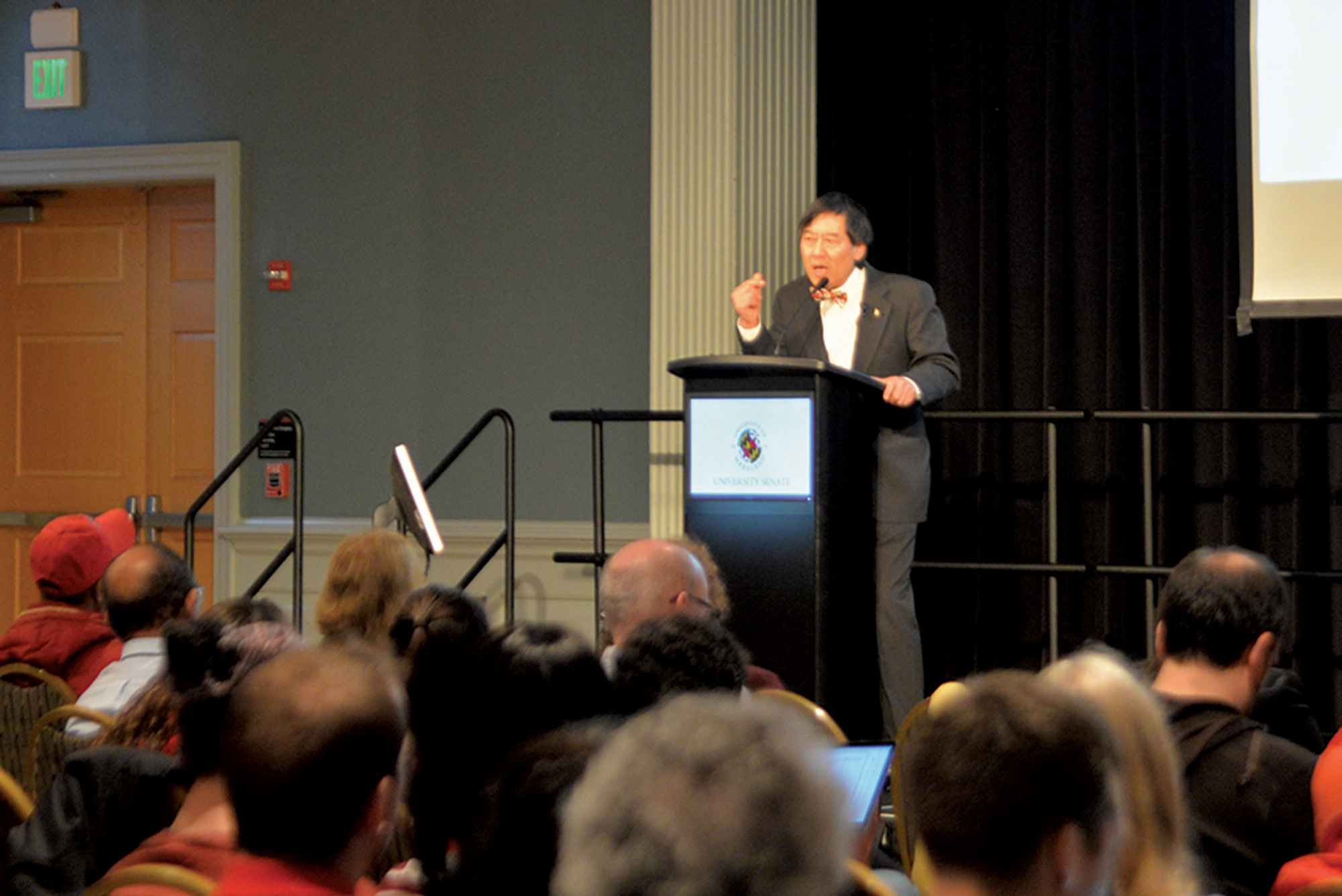 President Wallace D. Loh speaking at the State of The Campus Adress held in the Colony Ballroom in Stamp on Tuesday, December 6 2016. Ornelle Chimi/ The Diamondback

In the wake of a highly divisive national election, University of Maryland President Wallace Loh’s annual State of the Campus Address on Tuesday was marked by a clear call to embrace diversity — and a student response demanding further activism.

Much of Loh’s speech, given before the University Senate in Stamp Student Union’s Colony Ballroom, focused on inclusion and diversity, which Loh called core values of higher education.

“The core values and ideals of higher education … of inclusivity, of diversity, of pursuit of truth in an era of post-truth, of civility and tolerance, those are being in effect repudiated by a new populism,” Loh said. “… So in this time of uncertainty and vulnerability, when post-truths trump the facts and fairness, I want to say loud and clear that the University of Maryland is absolutely committed to a safe and supportive educational environment.”

And in line with his November promise to protect undocumented students, Loh said unless immigration enforcement officials have a warrant, this university would not share student information or allow them to enter campus buildings. Loh added that University Police have not and will not partner with these officials to help with enforcement, and would not detain, question or arrest any student solely because of his or her undocumented status.

“These are the things that we will commit to, that we will do and will not do in order to create a safe and supportive learning environment,” he said.

Some students in attendance took the time to ask Loh about his stance on Black Lives Matter, his way of addressing undocumented students and demands for higher student wages.

“Do I acknowledge that Black Lives Matter? Well of course, black lives matter,” Loh said in response to a student question about whether he acknowledged the movement. “Black lives matter because this is basically today’s version of civil rights. It’s one way of expressing one’s outrage over the shooting of unarmed black persons around this country.”

Junior sociology major and University Senate member Ashley Vasquez also asked Loh if he wished to apologize for speaking in Spanish for a part of his speech that discussed protecting undocumented students — a move that she said “does not represent the entire immigrant community here.” Loh had used a similar approach in a Nov. 21 campus email expressing solidarity with marginalized groups.

While Loh did not respond directly to Vasquez’s comment and question, when another student asked him again if he wished to apologize he did respond but did not apologize.

“I simply said that I completely support — I said in Spanish what I previously said in English,” said Loh, who grew up in Peru. “Are you asking me to apologize because I’m speaking in Spanish, which is the first language I learned?”

Vasquez told The Diamondback afterward she was personally offended because she felt Loh using Spanish when speaking specifically about undocumented students made it seem that there are only Latinx immigrants on the campus.

One student protest might have struck Loh with déja vu. At last year’s State of the Campus Address on Nov. 10, 2015, Loh was interrupted before he could begin speaking by Student Labor Action Project members who chanted that they can’t afford tuition, rent and food and demanded higher wages at this university.

It happened again Tuesday — but in a non-vocal fashion.

A few minutes into Loh’s speech, a group of activists from SLAP rose and walked to the edge of the stage in the Colony Ballroom, carrying large signs that read, “STOP LOH WAGES FOR STUDENT WORKERS, UNION MEMBERS AND STUDENTS STANDING TOGETHER.” After being told to sit down, one pair of students sat in the front row displaying their sign right in front of Loh as he gave his address.

“This is our way of saying look, Loh, this is still a problem, and we’re still here trying to work with you on this,” SLAP founder Chris Bangert-Drowns said, noting that he believes the administration has not publicly demonstrated that they have seriously analyzed raising the minimum wage.

While Loh’s speech largely focused on diversifying this university and protecting its students, he also highlighted his long-term vision for education, research and economic development.

In the past year the university has also grown its research opportunities as a result of its collaboration with the University of Maryland, Baltimore and contributed to the economic development of the surrounding community, Loh said.

State lawmakers formally expanded the relationship between this university and UMB last spring. When Loh took over as president in 2010, he learned there was just one professor with joint appointment between the two schools, he said. Now, there are more than 60 joint faculty appointments that have generated $80 million in research.

“The vision for transforming College Park — it is a vision to make College Park the Silicon Valley of Maryland,” Loh said. He also estimated total development in the greater College Park area for ongoing projects and work in the pipeline to be at $2.6 billion.

Loh’s speech lasted about 75 minutes and was followed by about 15 minutes of question-and-answer. Lauryn Froneberger, a senior journalism major who is also president of this university’s NAACP chapter, said she walked away feeling disappointed with Loh’s responses to students questions.

“As a student you want to know that your university stands by you and won’t use language that sort of offends you,” Froneberger said. “And even if you let them know they offended you, I think it’s important to acknowledge that. I don’t think he acknowledged that at all.”

The senate will reconvene on Feb. 9.