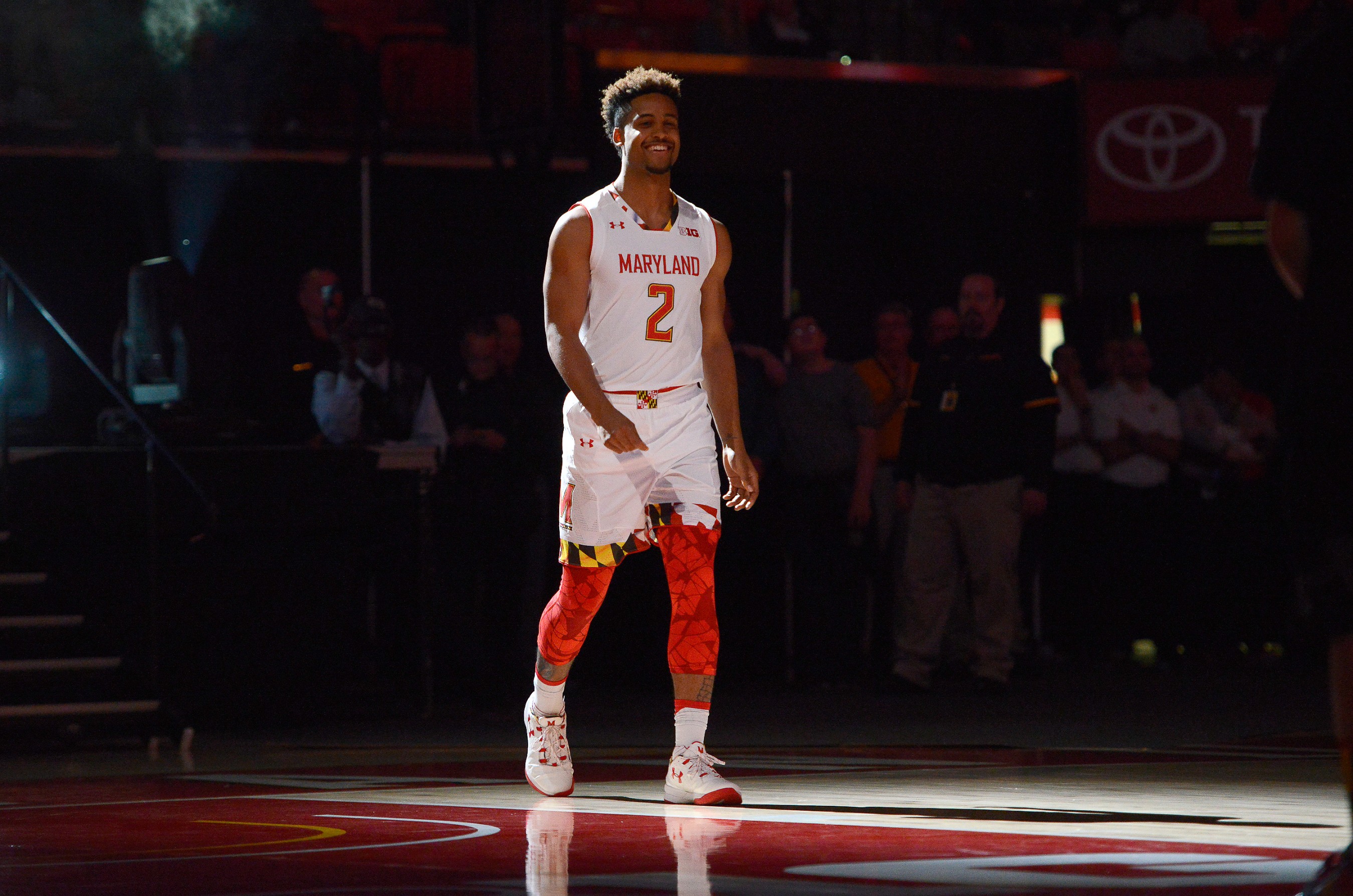 Melo Trimble heard it all.

He heard the praise for his freshman season that catapulted Maryland men’s basketball back to national relevance, showering hope and hype on the soft-spoken guard with a megawatt smile and an uncanny ability to get to the rim.

He heard the complaints when his shots stopped falling, the whistles became less frequent and the team with sky-high expectations slogged through the final month of the season that ended four games too early.

He heard it all, and he’s back to show his freshman flash wasn’t a freshman fluke, to prove his sophomore slump can serve as a jumping off point for his junior campaign.

This is Trimble’s team, and he controls the third installment of his narrative.

“A chip on my shoulder,” Trimble said. “That’s how I’m going to play all year.”

Trimble spoke about that edge sitting at a Wardman Park Marriott ballroom table during Big Ten men’s basketball media day in mid-October, days after he earned a spot on the conference’s preseason team. That was nothing compared to the soaring expectations he faced at the event a year earlier as the Preseason Big Ten Player of the Year.

Then, he was the guy, the hunted, the one everyone else wanted to beat.

The Terps entered the season at No. 3 with one of the most talented rosters in program history. But Trimble admitted the group struggled to gel on the court. His scoring average decreased by more than a point, and while his assist rate rose, a hamstring injury contributed to derailing the second half of his campaign and his hopes to go professional after the season.

The NBA scouts were honest. He needed to display better athleticism. He had to take better care of his body after dealing with that hamstring ailment and a back injury the year before.

So he balanced classes while testing the NBA scene. He went to the combine. He worked out for teams, including one the day after a final exam in College Park.

But all along, coach Mark Turgeon expected his guard would return. He had more to accomplish. More to prove. More to hear.

“I knew he was coming back,” Turgeon said of Trimble’s wait to announce his return until the final evening of the deadline. “I just didn’t know what the hell he was waiting on.”

But on the first day of preseason practice last month, Trimble spoke up and saw his teammates pay attention. Seven of those players were newcomers who committed to a program he helped rebuild, and the others were his counterparts who witnessed the daily commitment that comes with being “Melo Trimble” on Maryland’s campus.

They accepted the critiques he started offering. They listened to his positive reinforcement. He challenged guard Anthony Cowan. He encouraged Justin Jackson. He gave advice on defensive screens to Micah Thomas.

“I have a hard time getting bumped on them, but he tells him to shadow,” Thomas said. “After he told me that and showed me how to do it, it’s been like a walk in the park.”

Off the court, he kept it light, too. He has a “funny laugh” guard Dion Wiley couldn’t imagine attempting at the team’s media day. He dances, even though Wiley conceded the Upper Marlboro native isn’t a “dancey guy.” And he’s had a few scares with his dog, Jefe, losing his collar and running out of his room that have left teammates laughing in his apartment.

All of these are antics and fun and leadership Trimble couldn’t have imagined engaging in two years ago.

Turgeon’s also watched that transformation. His star’s body language signifies command. He looks teammates in the eye. His voice doesn’t crack and his message is assured and clear.