A UMD professor postponed an exam after Trump was elected president 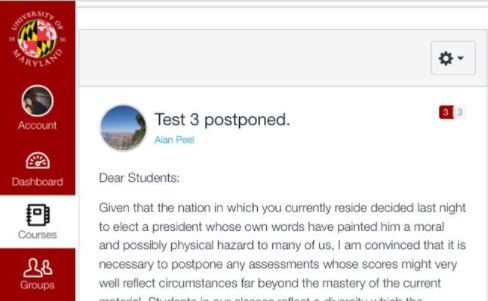 After a surprising upset in the 2016 presidential election, a University of Maryland professor postponed an exam and canceled class due to “the great source of anxiety” the results have caused.

Alan Peel, an astronomy professor in this university’s computer, mathematics and natural sciences school, contacted students in his 9 a.m. class through the ELMS website to tell them that taking an exam was “unfair.” 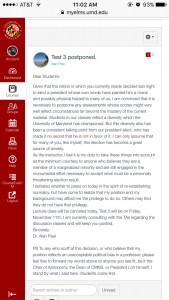 “Given that the nation in which you currently reside decided last night to elect a president whose own words have painted him a moral and physical hazard to many of us, I am convinced that it is necessary to postpone any assessment whose scores might very well reflect circumstances far beyond the mastery of the current material,” Peel wrote.

Peel expressed concerns toward the president-elect’s views toward diversity, which the university has “championed,” he wrote.

“As the instructor, I feel it is my duty to take these things into account as the minimum courtesy to anyone who believes they are a member of a marginalized minority and are still engaged in the monumental effort necessary to accept what must be a personally threatening election result,” Peel wrote.

This fall, roughly 40 percent of this university’s undergraduate students from the U.S. are minorities, according to the Office of Institutional Research, Planning and Assessment.