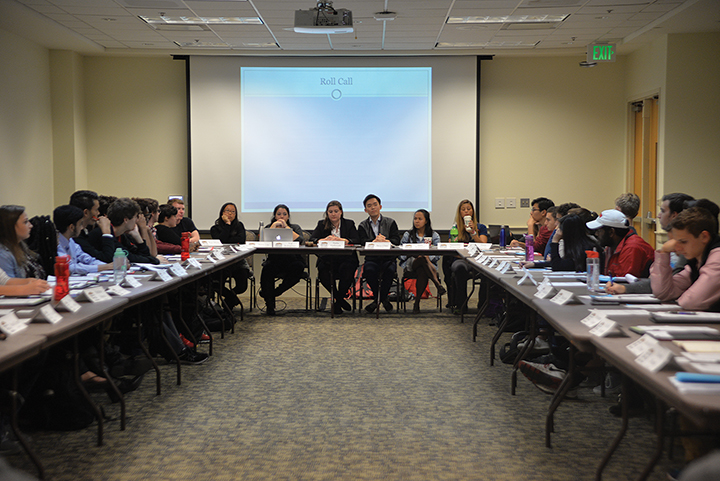 RHA Meeting about TitleIX held in the Benjamin Banneker Room at Stamp on Tuesday, October 11 2016.

Less than a month after the University of Maryland’s SGA proposed a $34 student fee increase to help fund the Office of Civil Rights and Sexual Misconduct, the RHA is announcing plans to offer their own bill that would call on this university to eventually pick up the tab.

Dana Rodriguez, Residence Hall Association student groups and organizations liaison, said she plans to write the bill, and is considering a system of match-funding between students and the university as a means to adequately fund the office.

The RHA hopes that the student fee will be “gradually lessened over time,” said Rodriguez, a junior finance and government and politics major.

“So while the student fee [would] be $34 per semester, that can hopefully be lowered so there’s less impact on students, and the ability to pay for the Title IX Office is spread throughout the major stakeholders of the university,” she said.

The SGA’s proposed student fee would have to be approved by a university committee, university President Wallace Loh’s cabinet, Loh and the Board of Regents before going into effect. The RHA plans to discuss its own fee proposal at its third senate meeting Oct. 25, and vote on it during their Nov. 8 meeting.

This university’s Title IX Office, currently staffs one director and four investigators to handle sexual misconduct and discrimination complaints from 60,000 students, faculty and staff. Title IX Officer Catherine Carroll has said the office has been underfunded since its establishment in 2014. The office handled 15 student rape investigations last academic year that lead to four expulsions, Carroll told the University Senate on Thursday.

Rodriguez said student fees change from year to year, and the aim of the bill is to provide the office with a source of income they can count on.

“Commitment to the Title IX Office is extremely important to how we function as a university,” Rodriguez said. “The immediate solution was to get students to pay for it because the university wasn’t stepping up, so the motivation as we look forward into years way beyond is, ‘How are we going to get Title IX funding to be sustainable?'”

RHA President Steve Chen said he feels it’s important for RHA, which represents all students living on the campus, to voice its opinion on the matter.

“[The SGA] brought forward this proposal, and since we are a legislative body we want to make some sort of statement regarding this proposal and force our thoughts,” the senior biological sciences and public health science major said.

Chen noted that students alone should not be tasked with upholding the office.

“It’s not just our opinion; I think it’s the general opinion of students,” he said. “… This primarily [is] not our responsibility to fund this office — it’s the university’s.”