GALLEN: No one should look past Terps’ final year in the ACC 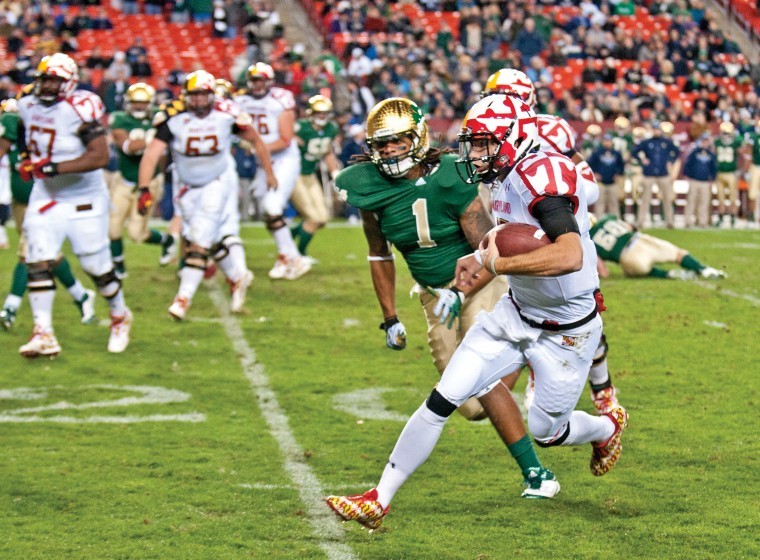 Notre Dame will leave the Big East and join the ACC after the conference’s Council of Presidents unanimously voted to bring the school in in September.

When the ACC formally welcomed Notre Dame, Pittsburgh and Syracuse with a press conference Monday, everyone there made sure to talk about the future, like the basketball league that’s expected to place the most teams in the postseason every year, or the opportunity to continue to put more teams in football bowl games.

And though it wasn’t stated explicitly, the ACC’s future is one without this university.

“The composition of the long-term membership of the ACC has never been stronger,” commissioner John Swofford said Monday.

It’s now less than one year until Terrapins athletic teams will enter the Big Ten, ending a 19-month wait that began with a press conference in Stamp Student Union in November, and it’s easy to get caught up in that. There are some historic Terps moments in the ACC, but there’s also been plenty of perceived condescension on the part of the fan base by way of ACC leadership. So for some, the sooner July 1, 2014, comes, the better.

But no matter what, there’s still one year left in the ACC, and it’s shaping up to be one to remember. Notre Dame, Pitt and Syracuse each bring something to the conference, and it only ups the level of competition for one last go-through in the ACC.

The easy place to start is ACC basketball. Terps men’s basketball combined with Syracuse to win back-to-back titles in the early 2000s, and Orange coach Jim Boeheim has his team in contention year after year for high seeds and deep runs into March. Notre Dame — led by local product Mike Brey, who grew up a Terps fan and gave this university its only mention in the introductory press conference — is often a top-25 squad that recruits the region well. Pitt appeared in 11 of the past 12 NCAA tournaments. The quality is there.

And in the spring, the additions of Notre Dame and Syracuse men’s lacrosse deepen the nation’s top lacrosse league. For one year, the nation’s six best teams could all reside in one conference, with the Terps taking on perennial championship contenders.

The same is true on the women’s side, as the Terps and Orange squared off in this year’s national semifinals, which the Terps won. Field hockey also tangled with Syracuse in the NCAA tournament en route to the 2011 national championship.

And many Terps teams are poised to make runs in the ACC again this upcoming school year. Men’s basketball beat Duke twice this year and will return a maturing squad despite the loss of center Alex Len to the NBA. Men’s soccer is the defending conference champion, while women’s lacrosse has won five straight ACC titles. Women’s basketball, an ACC tournament semifinalist, will return a number of players from significant injuries.

Essentially, there’s a good chance the Terps could add to their collection of ACC titles before leaving once and for all.

It’s easy to look ahead and feel blinded by the idea of the Terps taking on Michigan in the Big House or Ohio State at the Horseshoe or Wisconsin at Camp Randall. It’s easy to think about conference tournaments in a variety of sports played in major cities like Chicago or Minneapolis, as opposed to Greensboro, N.C.

But the reality is there’s still another year left in ACC play with the usual foes like North Carolina and Duke — and more trips to North Carolina for the fan base.