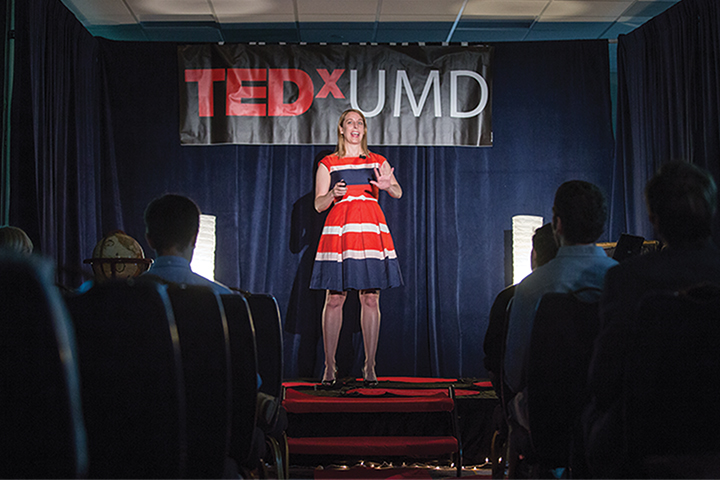 The University of Maryland hosted a TEDx event in the CP Marriott Hotel & Conference Center on Saturday, May 3rd.

More than 100 students, alumni and professors attended this university’s first-ever TEDx event this weekend, which focused on understanding what it means to be human.

TEDxUMD featured 18 speakers on Saturday, each trained in various fields and tasked with giving a presentation at University of Maryland University College on the human experience or the culmination of all that one experiences in a lifetime.

Determining what one’s human experience has entailed requires self-reflection, a task some say is one of college’s social roles, said Hareem Mannan, a senior biology major and the event’s head organizer.

When first looking into TED Talks, Mannan said she was shocked there had not been one at the university already, so she began applying for a license to hold the event last fall.

“Maryland has given me so much already,” Mannan said. “I wanted to leave them with something.”

When the talks began, speaker Gerald Suarez, who spent 11 years counseling former presidents Bill Clinton and George W. Bush in the White House, told the audience that a person faces mostly internal obstacles on the journey to achieve his or her aspirations.

“You choose what you spend your life on,” Suarez said.

University professor Barbara Jacoby, who teaches a class on navigating futures after graduation, defined the human experience in college as the “quarter-life crisis.” More than ever, students have the difficult decision of finding what to make their lives’ work, which can become over-complicated by the influx of information available to them, Jacoby said.

On stage, Jacoby shared her story of finding her career path while she attended this university decades ago. College is a time to be selfish, reflect on your core values and be open to change, she said.

Dylan Selterman, who spoke about the science of dreams and how they affect the human experience, said he saw TEDxUMD as a great way to showcase what goes on at the university. Selterman said it was easy to agree to present at the event because he was already a fan of TED Talks.

“I use them in my teachings,” Selterman said.

Mannan said she didn’t know most of the people helping her organize the event, but when she reached out to the university community, people jumped at the opportunity. Ted Talks are an example that education should never be limited to a strictly academic setting, Mannan said.

There are already plans for another university TEDx event in the fall, she said.

Meher Kachwala, a 2013 university alumna, said she has always been interested in TED Talks and wanted to see the conference brought to this university’s community.

“Some of them really do inspire me,” Kachwala said of TED Talk speakers she’s seen in videos online.

Every student who came to the event still has time to decide what to do with his or her life, junior Momina Mazhar said. Breaks between speakers allowed attendees to talk to presenters, in what she called a great networking opportunity.

“[It] really helps you get on track and re-evaluate,” Mazhar said.

Samuel Pinkava, a 2009 university alumnus, said he was fascinated by the human experience discussions on social media and considered it a sign of changing times in the Internet age.

“You have to know who you are — now more than ever,” he said.