Porter Robinson brings imagination and fantasy to the electronic scene 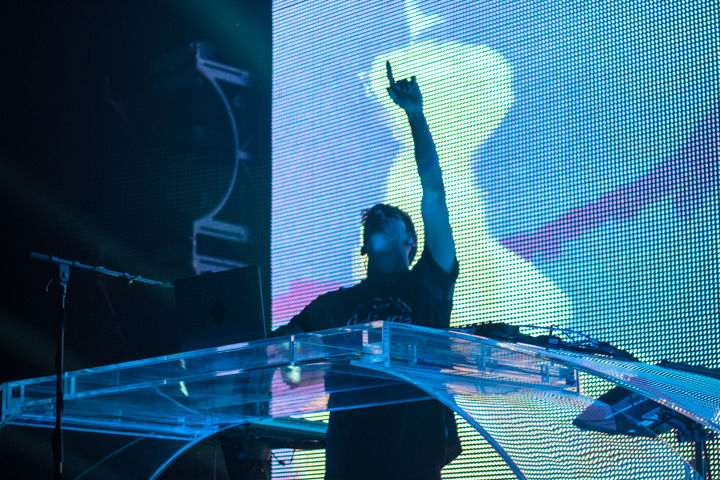 Coming out with a wave and a hello, Porter Robinson — dressed in all black except for white sneakers — opened his performance at the 9:30 Club with what seemed to be just another DJ set. But when the electronic dance music artist’s song “Sea of Voices” transitioned into “Sad Machine,” it became apparent that this show was going to be much more than that.

“Is anyone there? Oh. Hi!” echoed as both the robotic vocaloid and the crowd sang the opener to “Sad Machine,” the first single from Robinson’s latest album, Worlds. The hit blended into the wall of music when, suddenly: silence.

As the melody started to play, cheers erupted from the crowd and Robinson started to smile. I compared his demeanor onstage to his persona when I saw him two years ago; it’s clear this show means much more to him than the DJ sets he used to perform.

Playing the melodies on a variety of keyboards and singing his own songs, Robinson took Worlds to a whole new level with this live performance. Every song was familiar, yet different — each with its own live twist. Unlike his previous sets, which pulled huge original and peer-borrowed festival-ready songs, the entire set was his own. A majority of the show built off songs from Worlds, but also it included reworks of his previous hits “Unison” and “Say My Name.”

The wall of LED lights behind Robinson provided audience members a view into the world of Worlds. Vibrant colors and anime-style animation were set against video-game landscapes, creating a surreal experience alongside the music. The lights weren’t the only visual feature Robinson brought to the stage: Many drops in the music were timed with the releases of huge carbon dioxide cannons and confetti blasters, making the scene as hectic and beautiful as Robinson’s music.

The crowd was different from what you’d expect at a dance music show. The colorful “kandi bracelets” and vibrant clothes were exchanged for attire you might see at an indie rock concert — a variety of styles and people. The only constants were the multitudes of sporting the Worlds emoticon and the love of the music.

Openers Lemaitre, a Norwegian duo, started the show with indie-electronic vibes, performing songs like their hits “High Tide” and “Continuum.” The crowd was small at that point, but it still danced along. Giraffage came out to a building crowd and played a set with dreamy synths and heavy-hitting bass. People responded well, but their excitement for Robinson was evident once Giraffage’s last song finished.

Robinson closed with “Goodbye to a World,” his final song from Worlds. As Robinson and the vocaloid said their farewells, some audience members returned the message with tears in their eyes. Through an album that Robinson claims is about “the ability of our minds to create and imagine fictional places,” it seemed Robinson and his crowd were in the same fantastical world.

Taking the stage for an encore, he performed his 2012 hit “Language,” which sent the crowd into a frenzy and brought the show to a very energetic end.

“I’ve been on 38-ish shows on this tour so far, and I have to say that you guys knew this record better than anyone else,” Robinson said as he closed his set. “I love you so much for that.”