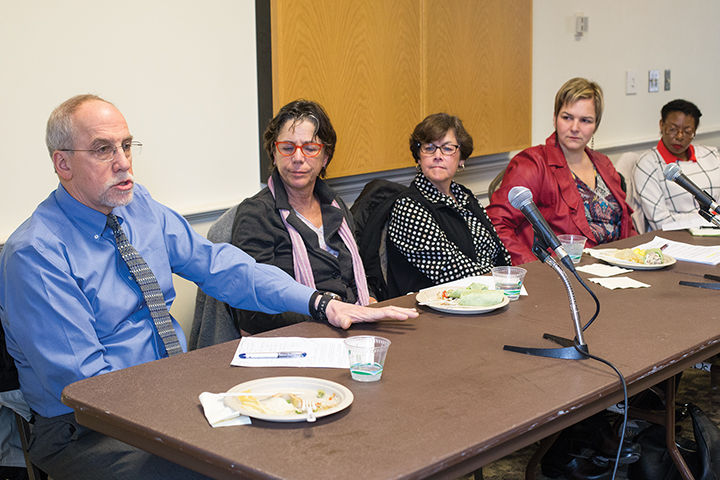 When letters and sciences adviser Yali Pan met one of her friends for the first time, she asked her why she didn’t wear dresses or skirts in the warm weather.

Her friend, who had had one of her legs amputated, said she was concerned people would judge her if she exposed her disability. That moment made Pan wonder how this university could create an environment in which members of the community with disabilities can feel comfortable, she said.

In front of about 50 students, staff and faculty, a panel hosted by this university’s President’s Commission on Disability Issues met yesterday in the Margaret Brent Room of Stamp Student Union to discuss how this university approaches disability studies.

“It’s long past due that we develop and support students from across the campus who are interested in disability issues,” said Peter Leone, a special-education professor who was on the panel. “We haven’t addressed it for so long, and it contributes to this notion of isolation.”

Ellen Fabian, a psychology professor, said including disability studies among the university’s course offerings is important in developing this university’s curriculum.

“I often feel that [disability studies is] the forgotten field – that it’s the add-on, rather than the centralized portion,” said Fabian, another panelist. “Studying disabilities is social justice.”

“Every time I teach my class, I grow and learn something new,” Palla-Kane said at the panel.

Stacey Brown, chairwoman of the President’s Commission on Disability Issues, said that inclusion should be a factor in the process of developing the disability studies minor.

“We have to take into consideration the multiple identities when working with students, staff and faculty,” Brown said.

Outside of the classroom, there are other topics that need to be addressed when discussing disabilities, said Izetta Autumn Mobley, an American studies doctoral candidate.

“It’s particularly concerning even as we move to this highly technological era,” Mobley said at the panel. “The iWatch was just launched today, but who can use the iWatch? Who can physically use that type of watch, and what does it mean when we’re increasingly setting up a system and global workforce that assumes that bodies must do certain things?”

There are many intersections between the issue of disabilities and the world, Leone said, and it will be difficult to include them all in the disability studies minor.

“For each of us, when we hear the word ‘disability,’ a different thought comes to mind,” he said. “Capturing all of that in a community likeness is a real challenge. We certainly don’t want to exclude any perspectives, but we have to say, ‘Here’s where we start.’”