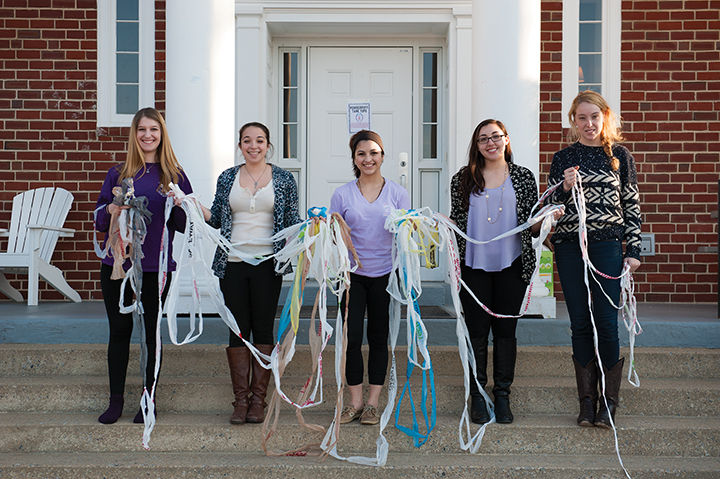 About four women sit together at the house of this university’s Sigma Kappa chapter each week for at least an hour talking, laughing, occasionally watching television — and cutting plastic grocery bags into strips.

Since the beginning of this semester, the sorority members have been slowly piecing together the plastic strips to create material that they will use to crochet sleeping mats for the homeless population.

“One of our service initiatives is Inherit the Earth,” said Alexandra Kramer, this university’s Sigma Kappa chapter’s vice president of philanthropic services. “It’s a national service initiative to be more environmentally aware and see how we can serve the community. … This project really incorporates that.”

This project, which Kramer learned about at service fraternity Alpha Phi Omega’s national conference during winter break, is something she hopes to expand beyond her sorority, Greek life and this university.

“We can do a couple as a chapter, but we’re hoping as a chapter to run a larger campuswide project,” the sophomore environmental science and policy major said.

Sigma Kappa is collecting bags on a small scale at the house, but Kramer said expansion will help move along the project, considering each mat requires about 500 to 700 bags.

Kramer has teamed up with this university’s Facilities Management department to set up recycling collection containers for plastic bags across the campus, which could be used for the project. The collection containers will be placed in five locations on the campus: TerpZone in Stamp Student Union, the 24 Shop, Commons Shop, Leonardtown convenience shop and the North Campus convenience store, said Adrienne Small, this university’s recycling specialist.

As part of this university’s RecycleMania event, Kramer announced her project last night in Stamp and encouraged students to collect and recycle the bags.

“I do hope that we see longevity in this program and that other people in the campus do join this initiative,” Small said.

Not only is the project addressing an environmental issue, but it also is working on an issue within the local community, Kramer said. The Sigma Kappa chapter is planning on working with the National Coalition for the Homeless in Washington to eventually distribute the sleeping mats.

The group hopes to complete about four mats by the end of this semester, Kramer said.

“People who are homeless, they don’t have anything to sleep on,” she said. “If they end up finding something, it’s generally pretty heavy, and if it’s made out of any polyester or foamy material, it can get moldy if it gets wet, or bugs can live in it.”

The plastic bag sleeping mats keep away insects and are easily washable, which could prevent disease, Kramer said.

“Our homeless citizens would jump at the chance to have this permanent thing to sleep on every night,” said Michael Stoops, the community organizing director for the National Coalition for the Homeless. “Nearly one-third of the nation’s homeless are unsheltered, so this is useful and could be replicated by other organizations around the country.”

Stoops said the organization has outreach teams led by previously homeless people who go out and distribute food and hygiene materials to the homeless around the city. The teams could also easily hand out the sleeping mats, he said.

One of the outreach teams is a group from Hillel, a university Jewish student group, Stoops said.

Sophomore Maddy Bruffy, the president of this university’s Sigma Kappa chapter, has enjoyed working on the plastic bags and said she is proud of what the project is promoting.

“It’s so fun to get together and hang out; it’s easy to do, but it’s going to make a big impact,” said Bruffy, a psychology major. “We can’t wait to see what it can do and what it will become in the future.”