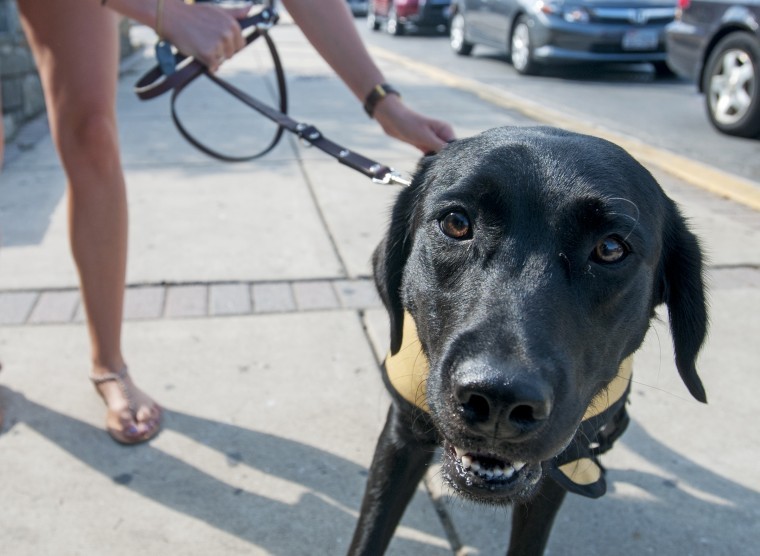 Between class, homework and staying active with the Kappa Alpha Theta sorority, senior government and politics major Emily Zier has one more responsibility on her hands — raising a 1-year-old black labrador named Rhonda.

And Rhonda — or Ronnie, as Zier likes to call her — is no ordinary canine; Zier is training her to be a service guide dog to assist the blind and visually impaired.

As a volunteer for the Guide Dog Foundation for the Blind, Inc., Zier’s job is to socialize, house train and teach Ronnie commands for about a year until she’s ready to be paired with an owner. And because the dog cannot be left alone for more than one hour, the busy student has to take Ronnie with her everywhere she goes — to class, to work and even to social events.

“It’s like having a child. A lot of times I can’t do things my friends can do,” Zier said. “You really can’t leave the dog. If you want to go out of town or have a test and think it’s not going to behave, you need to get a babysitter.”

Zier got involved with the foundation during her freshman year at the University of Georgia after she saw a student walking a guide dog on the campus and approached her about it. Zier had grown up on a farm, surrounded by animals, and something was missing from college life — the idea of volunteering with the foundation immediately sparked her interest.

Training to become a service dog trainer turned out to be a long and rigorous process. After completing three classes, applicants then had to attend two information meetings, followed by a house interview where the organization staff reviewed the space where the dog would be living. If selected, volunteers would receive a dog about seven or eight weeks old and attend class with it every two weeks to learn basic skills.

The training is not only a time-consuming commitment; it can also be financially draining. Because volunteers are unpaid and have to foot the bill for food and medical attention for their dogs, Zier said she often ends up losing money.

Still, Zier said having the opportunity to work with canines every hour of the day is its own reward.

“Being around the dogs is so uplifting,” Zier said. “A dog loves everyone. It doesn’t matter what color or religion, boy or girl. You learn a lot being around a dog all the time. You get to see things through their eyes.”

However, Zier was almost unable to bring Ronnie with her into the Kappa Alpha Theta house this year. After realizing state law prohibited her from keeping a service dog in the house, Zier contacted Sen. David Brinkley (R-District 4, Carroll and Frederick) about this issue.

Together, they drafted up a bill that would give volunteer service dog trainers more rights and essentially give them the same protection in public settings as people with disabilities and professional trainers.

“I went and testified before the Maryland Senate and House,” said Zier. “I brought Ronnie and explained to them why the law should be changed.”

This past May, S.B. 804 passed unanimously and Ronnie now lives happily in the Theta house.

Zier said her fellow sorority members have been a great help to her through the ups and downs of caring for her dogs. When she was swamped by an 18-credit course load and an internship on Capitol Hill last semester, a member of her sorority and senior communication major Tory Dorfman helped watch Ronnie while she was working.

“I love being able to watch her dogs grow and learn, and I can always see their potential and new skills that Emily has taught them by the end of their year with her,” Dorfman said. “Given all the pressures of college life, Emily has done an amazing job with raising all three of her dogs.”

And Zier said having her sorority is especially comforting during that inevitable moment when she gives up the dog who has been by her side for a year. Once a dog has learned to find things for its owner such as chairs and stairs, it is deemed ready to graduate from the program and matched with an owner to train with a professional trainer.

Zier has never met any of the people her dogs get matched with face-to-face, but she remains in contact with them. Zier hears from the owner of the first dog she trained, Petey, once a month from their home in Seattle. Her second dog, Lindy, went on to become an explosive detection dog for the Bureau of Alcohol, Tobacco, Firearms and Explosives.

“It’s extremely hard to give up the dog. They’re your best friend for an entire year,” Zier said, adding sorority members often brought her cards and chocolates to cheer her up in the past. “It’s heart-wrenching, but you have to remember that you don’t need the dog and someone else does. The dog is going to contribute to society in its own way.”