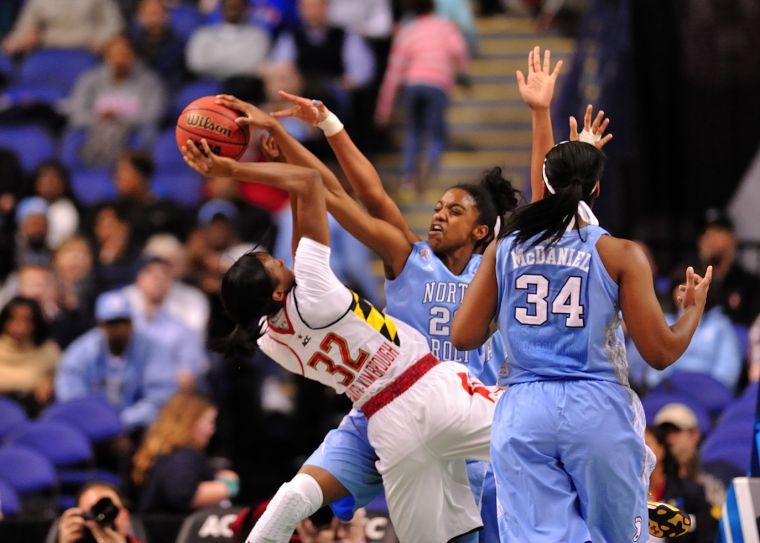 Guard Shatori Walker-Kimbrough during the Terps' 73-70 loss to North Carolina in the ACC tournament quarterfinals in Greensboro, N.C., on March 7, 2014.

GREENSBORO, N.C. — The clock at Greensboro Coliseum ticked down to 23 seconds, and Alyssa Thomas received the ball behind the three-point line, faced her defender and crossed over to her right.

With the score 71-70, the Terrapins women’s basketball forward tried to get to the basket for a layup to give the Terps a late lead over North Carolina. But as she made her move, the ball slipped off her right hand and fell between her legs. The ensuing scramble resulted in a jump ball that gave the Tar Heels possession.

Two free throws put the Tar Heels up three with 16 seconds left, and Thomas had an open 3-pointer at the top of the perimeter for another opportunity to keep the No. 3-seed Terps’ ACC championship hopes alive. But her shot bounced off the front rim, sealing the slim 73-70 defeat to No. 6-seed North Carolina in the ACC quarterfinals Friday night.

“We definitely had opportunities,” Thomas said. “But we just didn’t capitalize.”

Thomas, who won ACC Player of the Year last week for the third time, had 24 points and 11 rebounds, passing former Terps forward Crystal Langhorne as the top scorer in program history, but it wasn’t enough to earn the team a semifinal berth in its final ACC tournament.

“Sad for it to be over,” coach Brenda Frese said. “Definitely wanted to be able to go further.”

Guard Diamond DeShields, the ACC Freshman of the Year, led North Carolina (24-8, 10-6) with 22 points, while guard Allisha Gray had 17 points and 10 rebounds. The Tar Heels shot 80 percent from the free-throw line, while the Terps’ free-throw shooting proved detrimental to their comeback.

“Obviously, we didn’t take advantage of shooting the ball well from the free-throw line,” Frese said.

On the opening possession, guard Lexie Brown led a Terps fast break after a steal, but DeShields stole possession back before her layup attempt and launched the ball toward forward Stephanie Mavunga at the other end, who finished the open layup for the first basket.

The play set the early tone, as the Terps were 0-of-5 from the field with four turnovers in the opening five minutes, and the Tar Heels’ stingy defense proved tough to break.

Trailing 9-3 with 14:48 remaining, the Terps went on a 7-0 run. Brown’s and-1 free throw gave them the lead, but DeShields drained a 3-pointer five seconds later. During the first-half stoppages, Frese called the team’s frustrated guards to the sideline and put her hands on their shoulders, trying to calm them down.

“I thought Carolina was really amped up,” Frese said. “And for us, just to kind of get our poise under control, stay confident with what we were doing and really just to settle down.”

Despite the frustration, the Terps stuck around. Thomas, who struggled in the first 16 minutes, hit a jumper just inside the arc to close their deficit to 22-20 with 3:51 remaining in the half.

Those final minutes in the opening half ended at a fast pace. After a Mavunga layup, guard Latifah Coleman jumped in front of Thomas’ inbound pass, resulting in another North Carolina basket.

With the Tar Heels on a 15-4 run, Brown passed into the key to Thomas, who quickly flung the ball to center Alicia DeVaughn for an open layup. It was a rare moment in the first half in which the Terps displayed sharp ball movement to get into the paint, but they still trailed 37-26 at halftime.

The Terps’ effective offense carried into the first four minutes after the break, cutting the deficit to three. But the Tar Heels scored the next nine points, increasing their lead to 48-36. Thomas’ jumper with 11:19 left in the second half made it 52-45, moving her to the top spot of the team’s all-time scoring list.

“[It’s] just a huge honor,” Thomas said. “But we didn’t come up with the win tonight, so [it’s] something I’m not really thinking about.”

Guard Shatori Walker-Kimbrough missed a go-ahead long jumper with 38 seconds left, and DeVaughn scrambled for the rebound and called timeout to retain possession.

Though they had clear chances to tie or win the game, a sputtering start proved critical in the devastating loss. As a disappointed Terps team exited the Greensboro Coliseum court for the final time as an ACC member, they turned their attention toward avoiding a similar fate during the NCAA tournament in two weeks.

“If this doesn’t motivate you, then for us, it will be a very quick ending,” Frese said. “But I know the kind of competitors we have in the locker room, and we’ll use the week to get better.”