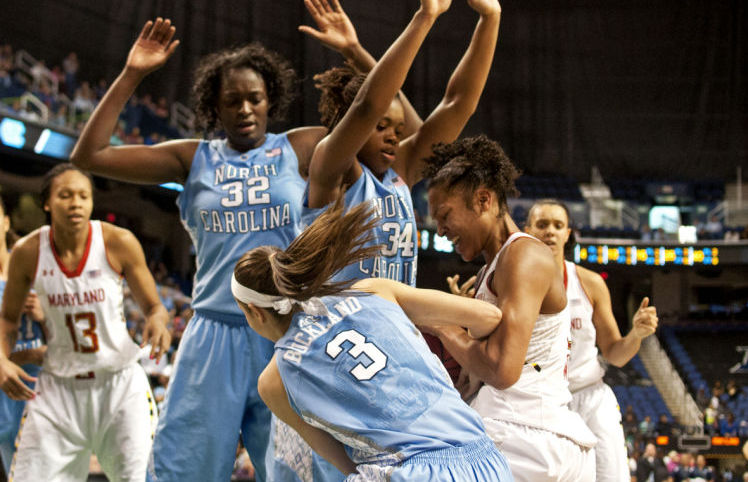 Forward Alyssa Thomas struggles for posession of the ball in the second half.

GREENSBORO, N.C. — One night after a late comeback to force overtime and advance to the ACC tournament semifinals, the Terrapins women’s basketball team couldn’t hold off a second half rally against North Carolina.

The No. 3-seed Tar Heels erased a 14-point halftime deficit — the second-largest in ACC tournament history — to defeat the No. 2-seed Terps, 72-65, before 8,754 at the Greensboro Coliseum and earn a berth in the ACC championship game against No. 1-seed Duke tomorrow.

The Terps went on a 19-4 run near the end of the first half and entered the intermission with a 38-24 lead. The Terps appeared have carried over the momentum from their torrid overtime period last night to today, as they shot 41.9 percent from the field and held North Carolina to 31.3 percent shooting.

Forward Tianna Hawkins scored 10 points in the first half, and forward Alyssa Thomas was on pace for her second triple-double in as many nights with nine points, eight rebounds and six assists. Guard Katie Rutan had nine points at the break on 3-of-6 shooting from three-point range. Center Malina Howard had eight points off the bench.

But there were a few signs that things wouldn’t stay that way. Thomas’ early shots weren’t falling, and she shot 1-of-7 in the half. Hawkins had layups roll in and out of the basket.

And out of halftime, things were all North Carolina. The Tar Heels went on an 18-6 run to open the half and pull within 44-42. The Terps responded to take a 50-43 lead, but North Carolina reeled off an 11-3 run capped by a Latifah Coleman layup at 5:23 to take their first lead since 16:05 remained in the first.

The Terps would never lead again, although the game was tied, 60-60, with 2:46 left after a Rutan 3-pointer. But the Terps had no answer for Coleman, who scored 17 points off the bench in the second half on 5-of-6 shooting, including 15 in the final 6:04.

Coleman played just two minutes last night in the Tar Heels’ quarterfinal win over No. 11-seed Boston College. Her fresh legs provided a boost, and the Terps, using a six-player rotation one night after playing 45 minutes, couldn’t keep up.

Thomas would finish with a game-high 26 points on 6-of-18 shooting, 12 rebounds and seven assists. She shot 14-of-15 from the free throw line and set a tournament record by making 26 free throws in two games. Hawkins finished with 14 points and 10 rebounds, while Rutan made just one shot in the second half and scored 12 points.

North Carolina guard Tierra Ruffin-Pratt finished with 20 points and six assists, despite missing a portion of the second half with illness. She shot 10-of-12 from the free throw line. Center Waltiea Rolle had a double-double with 19 points and 11 rebounds.

Rolle, along with forward Xylina McDaniel, were key to the Tar Heels outrebounding the Terps, 44-38. McDaniel, the ACC Rookie of the Year, scored three points on 1-of-13 shooting, but she grabbed 12 rebounds as the Terps were outrebounded for the first time this season.

The Tar Heels advance to face off with Duke tomorrow, while the Terps will head back to College Park and await their NCAA Tournament fate, which will be announced March 18.