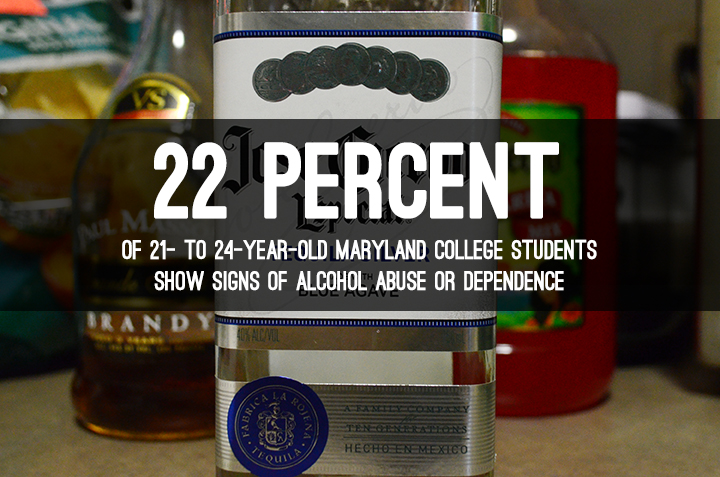 It’s a Friday night, and the late-night shuttle bus has erupted into a chorus of “The Star Spangled Banner,” complete with students grasping the bus railings on each side and flipping in midair.

This is what students such as Julia Jannetti, a freshman enrolled in letters and sciences, refer to as “the drunk bus.”

“It’s definitely overcrowded and crazy — I mean, it’s filled with a bunch of drunk college students,” Jannetti said. “It’s kind of funny how there are a bunch of people on the bus and everyone starts singing the same thing or doing the same chant. It’s kind of like the spirit that you get at sporting events.”

While a bus full of inebriated students on a college campus might not surprise many people, a recent study by the Maryland Collaborative to Reduce College Drinking and Related Problems indicated that alcohol abuse or dependence affects 19 percent of underage college students and 22 percent of 21- to 24-year-old college students in the state.

This university was one of 38 schools assessed for the study, which also found that underage college students in the state are significantly more likely than students in other states to have drunk alcohol during the past year — 83 percent of undergraduates 18 to 20 years old consumed alcohol in the past year, compared to a national average of 75 percent.

“The Maryland Collaborative was set up to understand where we are now as a state in addressing underage drinking, and to bring the best scientific evidence to campus administrators and leaders to help them guide their decision-making and policymaking,” said Amelia Arria, director of the public health school’s Center on Young Adult Health and Development and a leader at the Maryland Collaborative.

However, university officials and police said they are more concerned with the health consequences of overconsumption than with punishing students for drinking before their 21st birthdays. Instead of actively discouraging students from drinking, the university aims to promote responsible and safe consumption of alcohol, said Linda Clement, student affairs vice president.

“People leave their homes and the supervision of parents, and they come here and they get to make all of their own decisions. That newfound freedom people have is what I think causes people to drink to excess,” Clement said. “We don’t provide a message of don’t drink. Our message to students is be responsible.”

“The biggest concern I have here, regardless of age, is anyone who consumes way too much in a short period of time and there becomes a risk of death,” Mitchell said. “One student who is in medical distress is one too many.”

Many students who have a problem with alcohol abuse may not be aware of it until an emergency occurs, said Keira Martone, resident student conduct manager.

“Educating people about what alcohol dependence or alcohol abuse looks like doesn’t necessarily mean that a person is drinking every day,” Martone said. “If somebody is consistently drinking Thursday, Friday and Saturday night and drinking several drinks in each of those times then that may indicate a problem even if they’re fine on Monday and able to function.”

Megan Fitzmaurice, a doctoral candidate in communication, said signs of alcohol abuse or dependence in college could indicate a predisposition to alcoholism.

“I’m surprised it’s that low. The predominant college lifestyle very much encourages and facilitates a very strong foundation for alcoholism,” Fitzmaurice said. “It’s this American expectation that when you go to college that you drink and that’s what’s expected of you, so I think [students are] just following pretty normalized social cues.”

Although students often come to her office with concerns about university life, Clement said alcohol abuse and dependence are not problems they frequently present, so the study’s estimates of student drinking habits seemed exaggerated. However, she said, even a few cases of alcohol-related emergencies are too many.

“Every morning I get a report on any transports that have happened overnight,” Clement said. “Any increase in numbers in dangerous behaviors is going to be a concern to me.”

The number of alcohol incidents at this university has decreased from 338 during the 2008-09 school year to 255 in 2012-13, but over the same time, the number of students transported for overconsumption of alcohol rose from 37 to 83, according to data Martone provided.

These numbers constitute a small percentage of the student population, but Laura Place, the coordinator for Healthy TERPS, a program at the University Health Center that provides alcohol screenings and substance abuse counseling for students, said the number of students transported does not represent all students who show signs of alcohol abuse or dependence.

“People can have a diagnosis of alcohol abuse easily without ever having been transported to the hospital to begin with,” Place said. “Alcohol is the most commonly abused drug, period. That’s what we end up seeing the most [in the substance abuse program].”

Arria said she hopes the collaborative will prompt this state’s universities to pay more attention to the problem of underage drinking and alcohol overconsumption and work toward a solution.

“The most important thing to realize is that college students in Maryland are a valuable resource, and this whole initiative is about maximizing their potential and not letting alcohol interfere with their realization of that potential,” Arria said. “We know from research studies done in that past that excessive drinking can interfere with the realization of those students’ goals, dreams and aspirations, and that’s why it’s a problem.”