It’s a small business after all 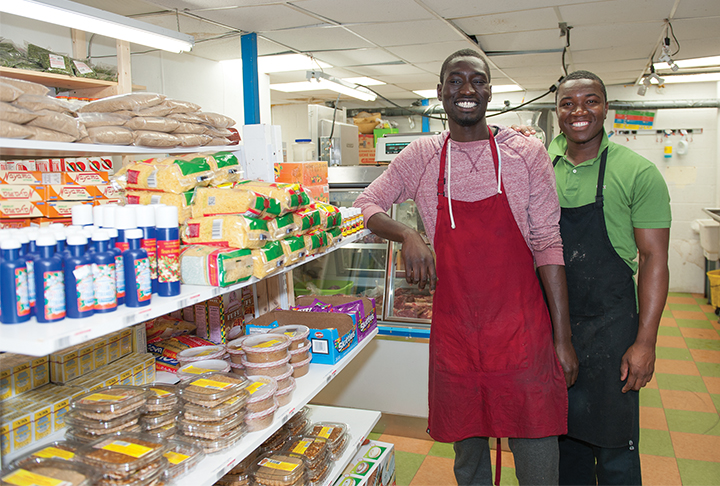 Omar Koite, age 28, and Omar Thiam, age 25, are brothers and co-owners of Star Halal Meat and African Grocery, a family run business that sells traditional West African foods and fresh meats. They plan on opening a College Park location within the next month.

When an entrepreneur decides to start a business, opening day seems just past the stretch of permits, payments and planning.

But sometimes the road from the idea’s creation to the grand opening can be more winding than it initially appears.

Two future College Park businesses, The Board and Brew and the Edgewood Road location of Star Halal Meat and Grocery, have experienced months of delays in opening their doors to the local community because of fees and permit problems.

For Board and Brew co-owners Ben Epstein, 35, and Brian McClimens, 36, a permit issue has delayed the board game cafe’s projected opening from January to June.

“Part of it is, I think, for people who have never opened a business before, there’s just a lot that you have to find out along the way,” Epstein said. “You can’t possibly know everything that’s going to come up.”

The partners originally planned to open their board game cafe in phases, opening the first section with fewer changes as their architect said they could. The county health department then told them they could not do that, McClimens said.

And as they reapplied for the permit, the architect failed to pay the necessary fees, and the department did not inform them they owed dues. When they went to pay, they were placed at the bottom of the list and had to wait another month, Epstein said. Oliver Schlake, university business professor and Entrepreneurship Fellows program Fellows program director at the Shady Grove campus, said one of the best ways to open a business successfully without delays is to “talk to people who are already doing what you want to do.”

From speaking with other business owners, Epstein and McClimens said they knew to allow time buffers for paperwork to come back from county departments, but they did not foresee these issues.

Co-owners, managers and siblings Omar Koite, 28, and Adja Koite, 23, helped their mother and brother open the Star Halal Meat and Grocery in Takoma Park in 2011. The brother-sister duo said they felt sufficiently prepared to open the new location.

In the new store, they intend to add a grill so customers can order food from the Grill Monster’s Star Halal Meat catering company in addition to the halal meats in the store, they said. But this required additional fire and health code inspections, further delaying their opening from the planned date in March.

The Koite family began paying for the space earlier this month, but they will not open the store until they receive full approval for the grill.

The siblings’ mother started the family business after moving to the U.S. from Senegal in 2002 and working in catering for some time. The family bought the store from a halal shop owner on the verge of failure and brought in more customers, Koite said.

Epstein said while the itch to open The Board and Brew is exciting, the amount of time and money it takes to start a business can be frightening.

“If the business fails, everything that we own is collateral for this loan, so everything is on the line,” McClimens said. “It’s a scary thing to move forward on.”

The Board and Brew owners spoke to about 10 banks about obtaining a loan to start the business before they found success through the U.S. Small Business Administration, which works with banks and small businesses.

Struggling and future business owners in College Park can also look to the city for grants, Michael Stiefvater, city economic development coordinator, wrote in an email.

The city’s Commercial Tenant Improvement Program offers up to $25,000 in total grants for leasehold improvements for new and aspiring businesses, and the Retail Business Assistance Fund gave six grants totaling more than $24,000 to existing businesses in November.

A community legacy grant from the 2013 fiscal year and the five-year Capital Improvement Program fund these two grants, respectively. Any business owners or prospective owners can apply for these grants through the city’s website.

“The successful places we’ve seen open recently have introduced a new cuisine … or provided a lively atmosphere,” Stiefvater wrote. “Hopefully some of these early success stories becomes the Ratsie’s or Bentley’s of the future.”

Regardless of setbacks to its opening, Omar Koite said his hope that the new Star Halal Meat and Grocery location will prosper is stronger than the fear that it won’t because of the effort he put into it, he said.

Epstein and McClimens said they are also confident The Board and Brew will be successful; as alumni of this university, the partners know what students wish to have in the area, McClimens said. Taking the plunge, despite the delays, stresses and fears, is worth it when looking at the big picture, Epstein said.

“In general, this is something that we love,” Epstein said. “We wanted to have jobs that we actually enjoyed and have a good reason to look forward to going into work.  Plus, it’s nice to be able to be your own boss.”