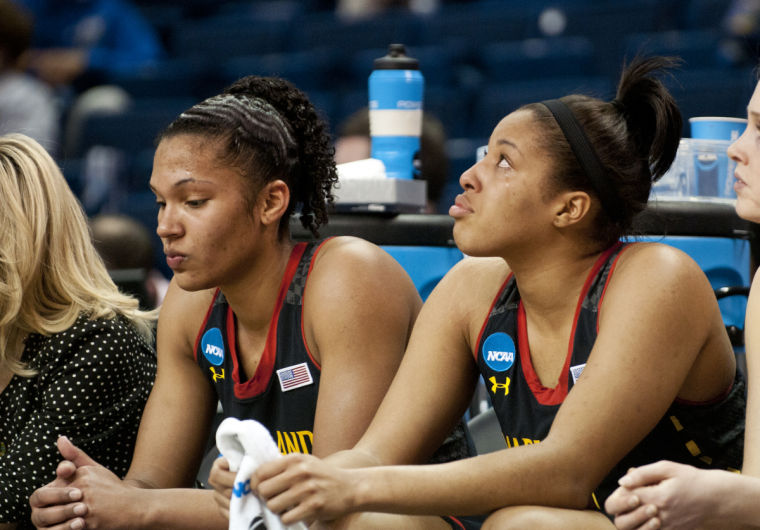 Senior forward Tianna Hawkins (right) and forward Alyssa Thomas on the bench during the final minutes of the Terps loss to the Huskies in the Sweet 16.

BRIDGEPORT, Conn. — Geno Auriemma yelled furiously at the referees late in the first half after he thought Terrapins women’s basketball forward Tianna Hawkins fouled Connecticut guard Kelly Faris as she drove to the hoop.

After several seconds of berating the officials, the Huskies coach earned a technical foul.

Forward Alyssa Thomas calmly drained one of two free throws. Then, Hawkins drained a jump shot with five seconds left in the half to cut a UConn lead that had stretched to as many as 14 points down to nine entering halftime.

But as there had been so many other times throughout the season and postseason, there would be no Terps critical intermission-spanning run Saturday afternoon. UConn opened the second half on a 9-0 run, and the No. 4-seed Terps’ season ended in a 76-50 Sweet 16 defeat to the No. 1-seed Huskies.

Playing before a sold-out crowd of 8,594 at Webster Bank Arena, the Terps started the game with plenty of momentum from Monday night’s 74-49 victory over Michigan State. The lead changed five times in the first five-and-a-half minutes, and the Terps led 10-8 with 15:27 remaining.

But the Huskies reeled off a 13-3 run and took a 21-13 lead. Center Stefanie Dolson and forward Breanna Stewart hit back-to-back 3-pointers, and the Terps missed 13 of 14 shots in that span.

A quick 7-2 spurt brought the Terps back within 23-20, but UConn — as they would all afternoon — had an answer. Guard Bria Hartley and Faris (eight points) hit back-to-back 3-pointers to put the lead back up to nine. Then, forward Kaleena Mosqueda-Lewis scored two straight baskets. After Stewart hit a pair of free throws, it was a 35-23 lead.

The Terps, aided by Auriemma’s technical, responded with five points in the final 57 seconds of the half to end the first half within striking distance at 35-26. The Terps held the Huskies to 38.9 percent shooting from the field, and five Terps scored at least four points in the first half.

After halftime, UConn surged and the game slipped away from the Terps. The Huskies scored the first nine points of the half, effectively erasing the Terps’ late first-half run and putting the Terps down 18 before Thomas scored the team’s first two baskets of the half. Down 14, it was the closest the Terps would be the rest of the way.

“Even to be down nine to Connecticut, in my opinion, is too big of a gap,” Frese said. “But I thought we would come out of the locker room with a lot more energy; but I actually thought Connecticut, they came in with a knockout punch in the second half.”

UConn shot 58.1 percent in the second half and 17-of-22 from two-point range. Stewart and Mosqueda-Lewis each scored 13 points in the half on a combined 8-of-16 shooting.

The Huskies could also go to their bench for another boost. UConn’s bench outscored the Terps’ reserves, 25-0, as center Malina Howard and guard Sequoia Austin didn’t dent the stat sheet. Howard, who scored in double figures 10 times during the season, scored just two points in three NCAA Tournament games.

Frese called Huskies guard Moriah Jefferson the game’s X-factor. The freshman scored 10 points, dished three assists and notched two steals in 26 minutes off the bench. She was quick, and the Terps, with only Pavlech and guard Katie Rutan in the backcourt, couldn’t match that boost.

The Huskies would also outrebound the Terps, 41-36, marking just the second time the Terps were bested on the boards this year. Center Alicia DeVaughn led the Terps with 11, but Dolson (10 rebounds) bolstered the Huskies down low with her 6-foot-5 frame. UConn also outscored the Terps in the paint, 40-18.

Thomas scored a team-high 13, and Hawkins and guard Chloe Pavlech each added 11. But the Huskies’ size and quickness forced Thomas into shooting 4-of-16 and Hawkins into 5-of-14. In the Terps’ two losses to UConn this season, Thomas shot 6-of-28.

Saturday’s loss wraps up a season filled with ups and downs for the Terps. After losing two projected starters for the season and a key contributor for the postseason, not many expected them to advance this far into the tournament.

But there they were, among the final 16 teams in the NCAA Tournament, battling the nation’s most successful program.

They ultimately fell short, but Hawkins — who played her last game for the Terps on Saturday — couldn’t help but see the positives of her senior campaign.

“UConn is a really great team, but we don’t want to take away what we bring to the table, too,” Hawkins said. “We’re a great team, too. We’ve been struck by a lot of adversity, but we never used it as an excuse. We hung with the best.”