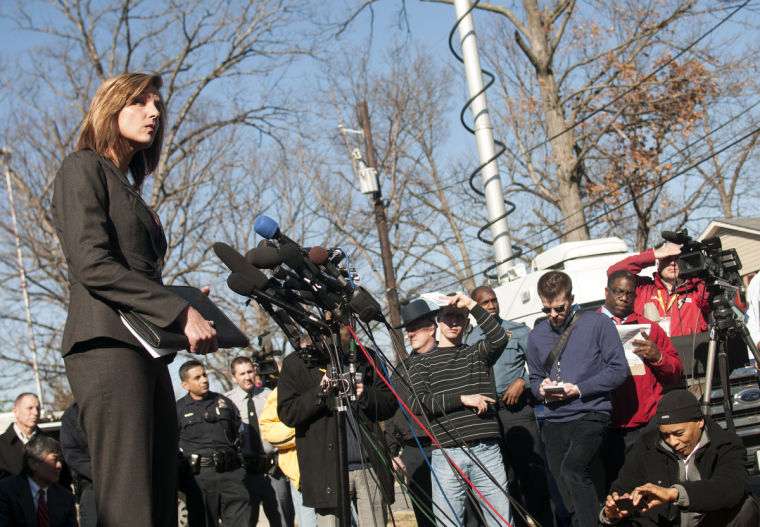 Julie Parker, a Prince George’s County Police spokeswoman, addresses the media at the scene of February’s murder-suicide, in which a student suffering from a mental illness killed his roommate and himself.

Julie Parker, a Prince George’s County Police spokeswoman, addresses the media at the scene of February’s murder-suicide, in which a student suffering from a mental illness killed his roommate and himself.

A graduate student shot two of his roommates, killing one, before taking his own life Tuesday morning at an off-campus home near the northern edge of the campus, police said.

Green had a machete, a fully loaded semiautomatic handgun, multiple rounds of ammunition and a baseball bat in a long bag, detectives’ investigation revealed. Green, who did not leave a suicide note, suffered from a mental illness for at least a year and had been prescribed medication, family members told police. Parker said he purchased the 9 mm gun in Baltimore County legally last year while he was mentally ill. Officers declined to specify the condition he suffered from.

Sometime before 1 a.m. Tuesday, Green set a fire in the basement of the house, along with several in the backyard, prompting his two roommates to go downstairs and see what was happening, Parker said. They then went outside to the front of the home and talked to Green about the fires before the three individuals agreed to go back into the house to douse the flames. The surviving victim then noticed Green reaching into his waistband for his handgun, prompting him to call a neighbor for help.

Green shot Rane, who was pronounced dead at the hospital, and shot the third student as he attempted to flee. He then went to the back of the home and shot himself, police said.

“This is a horrific situation and I just feel terrible about it,” university President Wallace Loh said at a news conference yesterday. “This is a great tragedy for the University of Maryland, for the entire community, and our thoughts and our prayers are with the victims and their loved ones.”

Until last week, the home had six residents, Parker said. One roommate moved out “within the last week or so,” she said; the three students in Tuesday’s incident were the only ones in the house at the time.

University officials were not aware of Green’s mental illness and he was not treated at any health care facilities on the campus, the university said in a prepared statement. Loh noted the number of on-campus psychologists and mental health professionals has “significantly increased” in recent months.

“It’s been such a distressing day for all of us, and my heart and thoughts go out to the families of the students who were involved,” University System of Maryland Chancellor Brit Kirwan said. “We all feel a great sense of loss. It’s a really unspeakable tragedy, but I think the campus is taking all of the appropriate steps.”

Before yesterday, police had received two calls from the home, Parker said. In October, police responded to a reported burglary only to find nothing had been taken, Parker said. The most recent call came on Jan. 30, which was a prank caller who referenced “something about hair on a couch,” before the call was disconnected, Parker said.

Detectives are interviewing witnesses and canvassing the neighborhood to find out more information, Parker said, and police are encouraging anyone with more information to call Prince George’s County Crime Solvers at 1-866-411-TIPS (8477).

“This is of course an issue that is currently being debated nationwide, but for today, I would like to focus on our mourning and our thoughts for the victims,” Loh said. “Tomorrow may be the day to talk about broader issues.”