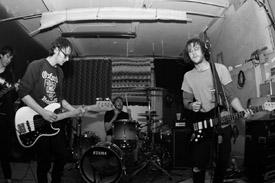 When Roomrunner, singer-guitarist Denny Bowen’s new punk outfit, performs on Third Rail Radio at WMUC 88.1 FM this Sunday along with Ed Schrader’s Music Beat and Deleted Scenes, they’ll be channeling more than just their own boisterous, balls-to-the-wall take on do-it-yourself indie rock. They’ll be triumphantly carrying – for one raucous evening – the taste-making torch of musical relevancy that is college radio.

“[College radio] is really important in cultivating good community,” Bowen said. “It’s a good headquarters for ideas and music and it definitely needs to keep going.”

Bowen, who was a part of his radio station as a student at UMBC, formed Roomrunner following the disbandment of Double Dagger, the cult-level Baltimore-based punk band he used to drum for.

In late 2011, Roomrunner released its self-titled debut EP and toured around the country, with a new EP to be released next month. Bowen feels playing WMUC is as close to home as it gets, even though it’s still a “road” gig.

“You play another [city] and it’s like another life,” Bowen said. “Playing College Park doesn’t feel like you’re playing a show out of town.”

Bowen attributes this comfortableness to WMUC’s prideful association with the Baltimore arts scene, boosting the careers of acts such as Beach House, Future Islands and Dan Deacon (the latter two have performed at WMUC before).

“It’s inspiring to see how enthusiastic people get about local artists,” said Bowen, who is no stranger to the devoted music fandom of Baltimore residents. “For people to be excited that it’s happening in their area, that’s special to us.”

Bowen promises this weekend’s Third Rail performance will feature all of the frantic energy of a Baltimore show, just in a smaller space.

“It’ll be wild as hell,” Bowen said. “We’ll try to play loud as hell and hopefully people will just get into it and we’ll make a connection.”

Roomrunner, Ed Schrader’s Music Beat and Deleted Scenes will perform Sunday on Third Rail Radio at WMUC, on the third floor of the South Campus Dining Hall. The show is free and starts at 6 p.m. The performance will air live on 88.1 FM and online at wmucradio.com.