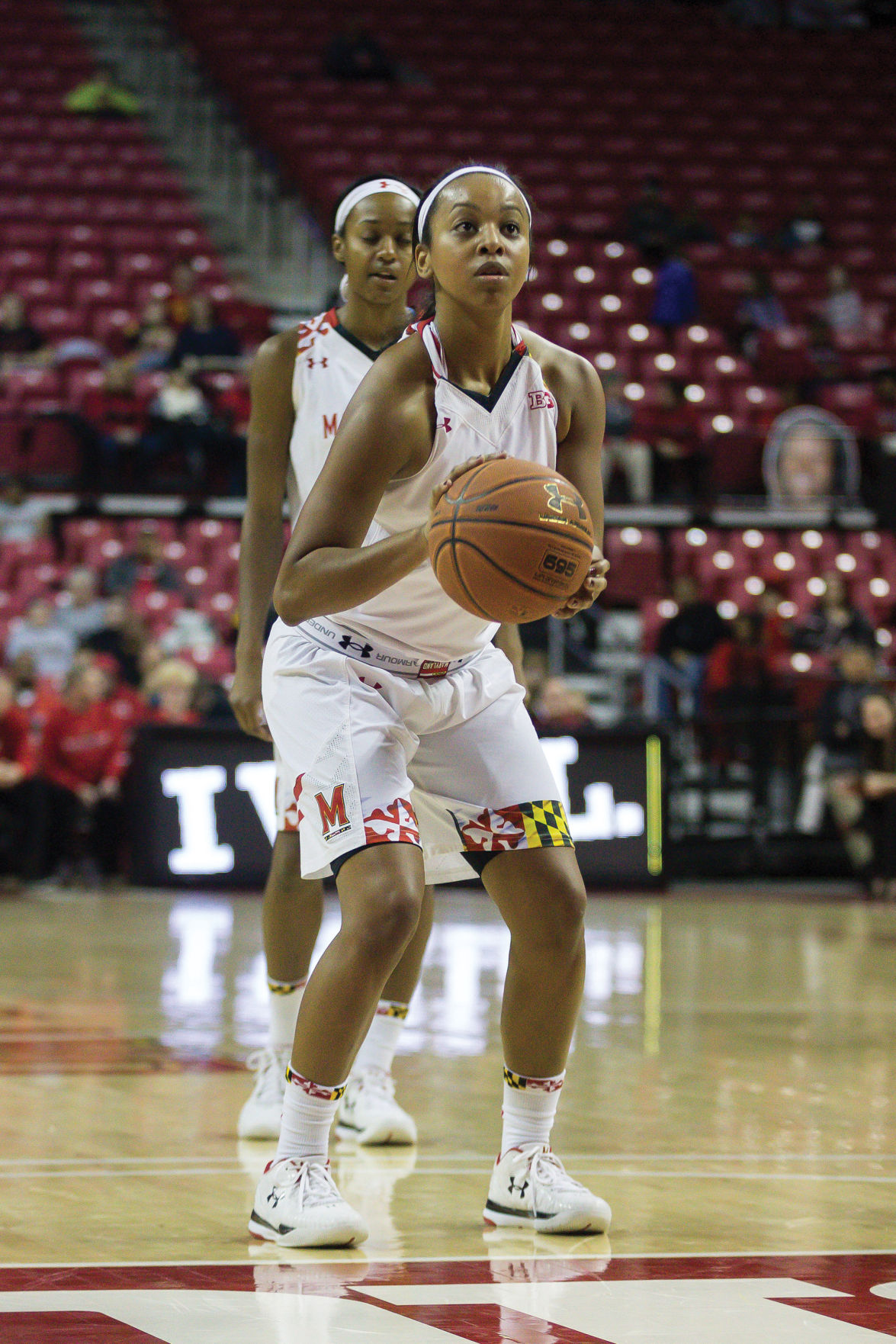 Terrapins guard Lexie Brown prepares to shoot a free throw during Maryland's 93-88 victory over Iowa on Feb. 1 at Xfinity Center.

Terrapins guard Lexie Brown prepares to shoot a free throw during Maryland’s 93-88 victory over Iowa on Feb. 1 at Xfinity Center.

Clinging to a two-point lead over Iowa with a minute remaining in regulation Sunday, the Terrapins women’s basketball team turned to Lexie Brown. The sophomore guard, who burst onto the national scene during last season’s NCAA tournament run, took the ball from center Brionna Jones and drove into the lane.

Brown burned her defender and scooped a shot toward the basket just out of reach of 6-foot-4 center Bethany Doolittle’s swatting arm. The ball caromed high off the glass before dropping through the net with 38 seconds left to give the Terps a critical two-possession lead.

The No. 5 Terps haven’t had many games come down to the wire this season, but with their 12-game winning streak on the line, the team wanted Brown in control. And she delivered in the 93-88 win over the No. 16 Hawkeyes at Xfinity Center.

“She has a great mind for the game,” Jones said. “We’re comfortable with her having the ball in her hands.”

After Brown sunk the basket, she didn’t spend any time celebrating. The Georgia native hustled back on defense with the Hawkeyes searching for a quick answer.

Seconds after Brown’s bucket, Iowa guard Samantha Logic sent a long pass across halfcourt that would never reach its intended target. Brown read the pass and intercepted it to cap a crucial seven-second stretch that ultimately sealed the Terps’ 13th straight win.

“When we had been pressing, they had just kept looking at that diagonal [pass], and we had to find the shooter,” Brown said. “I just figured that maybe they would do that again.”

Brown said she tries to hide the fact that she’s “freaking out on the inside” during the final stretches of close games, and any nerves the sophomore felt Sunday didn’t affect her play. She scored seven of her game-high 26 points in the final 90 seconds en route to her highest point total of the season.

“There were so many contributions when you talk about Kiara Leslie off the bench,” Terps coach Brenda Frese said. “The run we made with a season high of 26 from Lexie ‘Big Shot’ Brown.”

While some pundits expected Brown to emerge as the go-to threat offensively for the Terps after the program’s all-time leading scorer Alyssa Thomas graduated last season, she has been just one piece of the balanced attack that ranks fifth in the nation in scoring. Brown’s 13.1 points per game is third best on the team.

Instead, Brown has taken on more of a facilitating role within the offense. After dishing out seven dimes to one turnover Sunday, Brown is averaging 5.7 assists per game during conference play. And even though Brown took the shot in the final minute Sunday, she would have hit an open teammate if need be.

“The main goal is to get the best shot possible, and in this game, it happened to be my layup,” Brown said. “There have been so many times where the best shot is a dump down or a kick out, so I mean just taking the opportunities that present themselves.”

Brown’s ability to generate high-quality looks for teammates and create her own offense makes her dangerous late in games. With four Terps averaging double figures, Frese could’ve turned to multiple other players in the final minute.

Still, everyone wanted Brown to have the ball in her hands.

“We look to her,” Jones said. “She is great under pressure.”