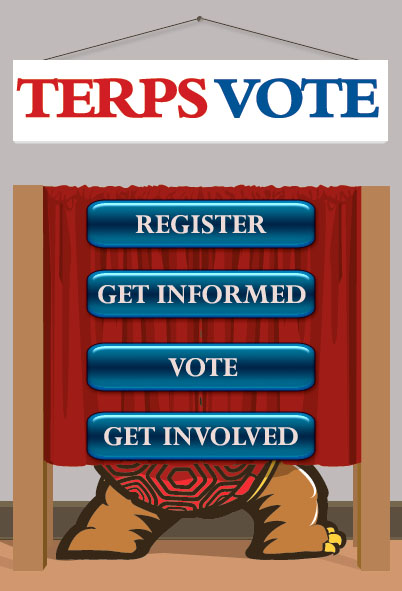 Getting out the vote

Getting out the vote

For some students, figuring out the voter registration process in the midst of classes and midterms simply posed a hassle — until the SGA made it as simple as having a student ID or stopping at a table at Stamp.

Thanks to a new in-house voter registration system, along with a concerted effort by the Student Government Association and several other campus groups — known collectively as the Terps Vote coalition — more than 4,000 students registered on the campus before the Oct. 16 deadline, compared with about 2,500 students during the 2008 election.

Although the groups were able to garner more than 1,700 additional student voters through paper registration, the majority came from the Terrapin Electronic Voter Registration System, with 2,327 students registering online.

“We were able to hit our overall goal — we wanted to register 4,000 people before the deadline,” said James Jalandoni, SGA governmental affairs director. “It was a lot of work from a lot of different people. It was a really great collaborative effort.”

The online system — which launched Oct. 1, leaving students 16 days to register through the system – required in-state or full-time out-of-state students to have a student ID in order to register.

“I originally saw people outside of Stamp promoting [the system],” said junior journalism major Sarah Polus. “They did a good job of trying to promote it on campus.”

Polus, a New Hampshire resident, used the system to join 445 other students in registering on the final day.

“I was planning on using an absentee ballot because New Hampshire is a swing state, but it was really confusing to get organized,” she said. “It was much easier to just get registered at Maryland.”

While Polus had already registered in the state, she said she was confused by the traditional paper system and wasn’t sure she had completed the process properly.

“Every time I was trying to figure out how to register before, it was confusing because I didn’t know the polling places, so I was hesitant to register,” she said. “I knew using the student ID meant we could vote in Stamp. It was really easy to register and made it a lot simpler.”

But Polus still felt the post-registration process was unclear.

“I kind of wish they had explained the process a little bit more,” Polus said. “I didn’t really understand if I was done registering or if there was more I had to do — I still don’t even know if I’m technically allowed to vote.”

Megan Konigkramer, a junior biochemistry major, said she was “very pleased” with the easy-to-use system.

“I did it on my phone while I was getting my hair cut,” Konigkramer said. “It was cool that our school is doing this and being really proactive with getting people to vote.”