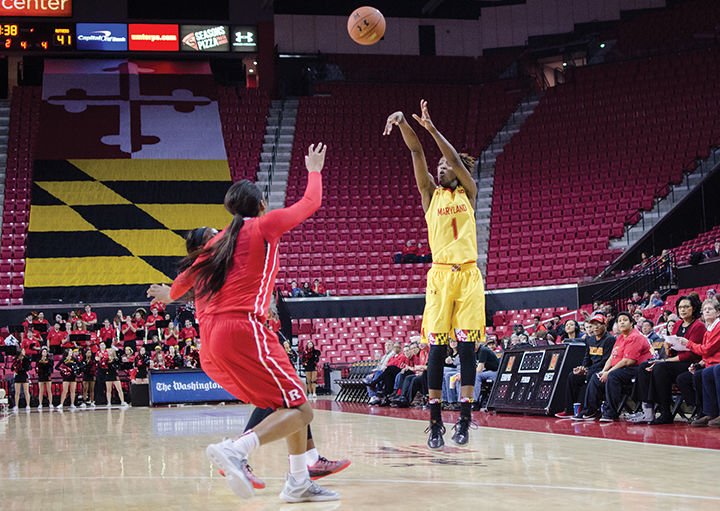 When the Terrapins women’s basketball team’s 2013-14 campaign ended in the Final Four last season after an 87-61 loss to Notre Dame, so did the college careers of five seniors.

Three of those five seniors, including three-time All-American Alyssa Thomas, started every game that season. So entering this season, coach Brenda Frese not only had several holes in the lineup to fill, but she was also left without a leader.

Nearly a year later, that void isn’t much of a concern. The Terps’ lone senior, guard Laurin Mincy, has helped guide the team to a 16-game winning streak and a 13-0 start to conference play. She will be leading the team onto the floor tonight when the No. 5 Terps play Michigan State (12-13, 4-10 Big Ten) in East Lansing, Michigan.

“She really keeps us on track,” guard Lexie Brown said. “She’s been through high points of seasons like last year when we were just rolling, and then she has been through low points when she was one of the people on the sidelines.”

It wasn’t an easy transition for Mincy, though. The New Jersey native would’ve been the sixth player in last year’s senior class, but she tore her ACL five games into her junior season and opted to redshirt to keep another year of eligibility.

When Mincy watched the other members of her original class move on, she realized she was now the elder stateswoman on a young team that needed guidance.

Mincy was anxious in part because she isn’t overly vocal. During her first four years with the team, she was reserved and let her play speak for itself.

So for the players who competed with Mincy before this season, they know when she speaks up in practice or games, it holds extra significance.

“She doesn’t say too much, so when we does say something, we all listen,” Brown said. “What she has to say is really important to us.”

There have been times during practice this season when the Terps (22-2, 13-0) are struggling or lack focus. It’s Mincy who steps in to get the team back on track.

Mincy said the senior classes during her first two years in College Park helped her learn how to lead.

“I was able to carry what they taught me to this team now,” Mincy said.

Even if Mincy isn’t the same type of vocal leader from year’s past, Frese has noticed the difference in how the lanky wing conducts herself this season.

“She was always pretty quiet and didn’t allow many people to know what’s going on in her head and what was going on inside,” Frese said. “She’s fully expressed it this year.”

The sophomore class of Brown, guard Shatori Walker-Kimbrough and center Brionna Jones, all of whom are averaging double figures, has helped replace the production of last season’s seniors.

But Mincy has emerged as the leader of the Terps and has helped pilot them to the best conference start in program history entering tonight’s matchup is with the Spartans.