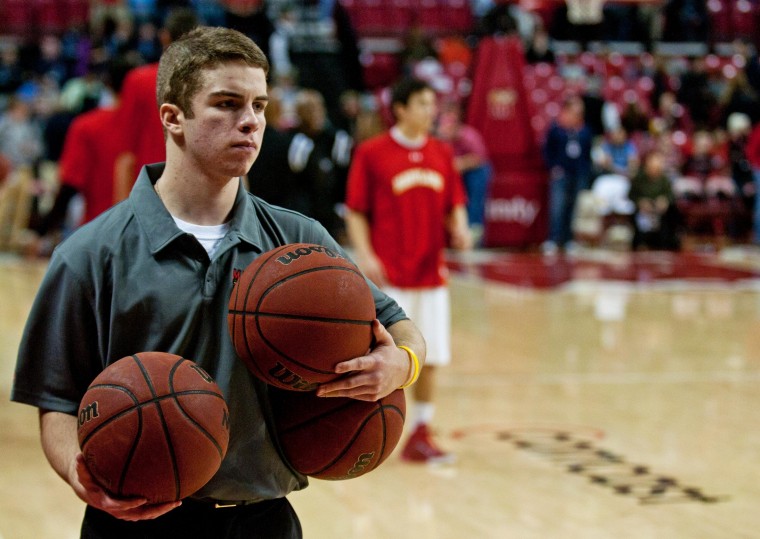 Zachary Lederer, a former student manager with the Terps men’s basketball team, picks up balls before a 2012 game against North Carolina.

Zachary Lederer, a former student manager with the Terps men’s basketball team, picks up balls before a 2012 game against North Carolina.

Doctors told him he wouldn’t survive the night. That was seven years ago.

But there was Zachary Lederer walking into Comcast Center, proudly wearing his gray “Maryland Basketball” polo and a pair of black slacks that Saturday morning. A white hat covered his half-shaved head and the 28 staples that lined the right side of his skull.

To the amazement of the Terrapins men’s basketball coaching staff and team, Lederer took his place under the basket, helping with lay-up lines, snagging water and Gatorade and sweeping the floors as the team prepared for its Jan. 28 game against Virginia Tech.

He couldn’t even see straight.

Just three days before, Lederer went through major brain surgery for a second time. Only 18 years old, Lederer has a cancerous tumor in his brain. Again. Seven years after beating cancer a first time, it has come roaring back. He doesn’t know if he will live for another month, another year or for much, much longer.

Lederer doesn’t care. He’s confident he will beat cancer a second time. His defiant fight has come to be symbolized by a post-operative strongman pose that’s gone viral and earned its own Tim Tebow-esque moniker: “Zaching.” For the team he’s devoted countless hours to, it’s represented a rare opportunity to step away from the game that tends to engulf everyone involved.

And despite the circumstances, he loves the life he’s living.

“I have cancer for the second time, I have all sorts of stuff going on with me, I don’t know where my life is turning right now,” Lederer said, “but I am living the dream.”

As gold-clad students flooded into Comcast Center in anticipation of a showdown with Duke on Jan. 25, a member of Mark Turgeon’s Terps family was absent.

He instead sat in a waiting room inside The Johns Hopkins Hospital, miles away from the cradle of Terps basketball, wearing a medical gown and counting down the minutes until he migrated to an open operating table. As guard Terrell Stoglin and the Terps prepared for their nationally ranked opponent, Lederer readied for a surgery that could save — or end — his life.

“We’re trying to beat Duke,” Turgeon told the team in his pregame speech that night, Lederer said. “Zach’s trying to beat cancer. These are two different things. Let’s get that straight.”

In Baltimore, the doctors finally called Lederer in for the surgery. Without hesitation, without any fear or worry, he said three words.

That same brazen confidence had propelled the freshman through a most unusual past seven years.

It all began in middle school, after a hospital trip for severe migraines ended with doctors finding a tumor in the middle of Lederer’s brain. After a 14-hour operation, they determined there wasn’t a way to extract any of the walnut-sized tumor from inside the 11-year-old. Instead, they had to install a ventricular shunt to transport fluids from his brain to his abdomen.

The operations produced so much swelling, Lederer said, that doctors had no other option but to induce a coma.

These days, Lederer breezes through the recollection of those difficult moments as if they were a weekend bout with a cold — not brain surgery.

The treatment worked, reducing the size of his tumor to a mere centimeter in diameter. It became so small, in fact, that by the time he entered his senior year at Centennial High School in Ellicott City, he was cleared to play — and did play — full-contact football for the first time since his surgery.

Through it all, there was never any indication that his fight wasn’t over, no sign that he would have to go through the whole process again. To him, cancer was finished.

“We were stunned,” Christine Lederer, Zach’s mother, said last week of the discovery of another tumor. “His doctors were stunned. We were all stunned.”

It’s not uncommon this time of year for Lederer to get a call late at night, if not in the middle of it.

Usually, the voice on the other end of the line is a Terps basketball player, asking the freshman to make the trek from his Hagerstown dorm to Comcast Center.

Lederer never hesitates. He drops whatever he’s working on or hops out of the bed he’s sleeping in to spend hours chasing down rebounds. It’s totally mindless, nearly thankless work, but also one of the myriad responsibilities Lederer has to uphold as a team manager.

“How can I complain?” Lederer said. “So many people would die for the opportunity to rebound for any Maryland basketball player.”

The broadcast journalism major’s passion for sports isn’t anything new. His first bout with cancer kept him from competing on the field for quite some time, but couldn’t keep him from the sidelines. He served as a manager for three years on the football and basketball teams at Centennial.

“He has a great basketball mind,” said Spalding assistant coach Pat McKindless, who worked with Lederer for two summers at the camp. “I could see him becoming a coach.”

When Lederer went off to college, Lewis and Aziz Abdur Ra’oof — the president of the M-Club, a university booster club for former student-athletes, and a family friend — put him in contact with the Terps’ program. Soon enough, Lederer became the eighth and final manager of the team under the newly hired Turgeon.

Investing about 30 to 50 hours a week in the program, Lederer carries out the perfunctory duties of a team manager. He gets to practice an hour early — 30 minutes before Terps players — to set up equipment. He lays jerseys out. He fills coolers with water and Gatorade.

“He’s been unbelievable, just off the charts,” said Dustin Clark, the team’s director of operations. “He gets it. He understands the game. But he also understands his role relative to our team. He’s always positive with our guys. He knows that it’s imperative that managers bring energy to practice to keep them high-intensity.”

Once practice starts, Lederer becomes a glorified cheerleader, expending what energy he has left after waking up to a 5 a.m. alarm.

“I have to go crazy as soon as I walk into the gym,” Lederer said. “I’m screaming, I’m cheering, I’m getting them pumped up.”

The morning of Jan. 26, Lederer wanted to show the world a different side of himself, one that spoke to his character and his vitality.

So with cords dangling from his arms and his hospital gown slightly unbuttoned, Lederer turned to his father, John, and said: “Dad, take a picture of me. I want people to see how strong I am.”

“If anybody is questioning that I’m not in the top shape of my life, I want them to see that I’m at the peak,” Lederer said. “If anyone has any worries, I’m making biceps in the hospital bed.”

Heavily medicated and still only hours removed from intensive brain surgery, he looked straight into the camera with a stoic stare and flexed both of his biceps. John Lederer posted the photo to Facebook as a quick pick-me-up for concerned friends and family who wanted to see that Zach was doing all right.

And he was. The new tumor, which doctors found in a yearly checkup at the beginning of January, was more accessible and treatable in surgery. This time, they were able to extract 80 to 90 percent of it.

And as Lederer pushed himself to get out of the hospital and back to Comcast Center for a game against Virginia Tech two days later, his father’s photo went viral. A high school friend started a Tumblr account to keep a running collection of people in a “Zaching” pose.

“Zaching is a new way to inspire.”

When Turgeon first heard about Lederer’s second tumor, he quickly tasked his staff to gather everything they could about him — his phone number, his parents’ names and address, his story from middle school. Anything they could find, Turgeon wanted.

In the midst of his first season at the helm of the Terps and surrounded by the countless duties of a Division-I head coach, Turgeon found time to routinely check in with Lederer and send him words of encouragement.

Soon enough, Lederer became an inspiration for the entire program.

“Zach’s such a great kid,” Turgeon said in an interview yesterday. “He’s such a hard worker. It’s made us appreciate him more and appreciate all the managers more for what they do. And I think for our players, to see a kid their age with cancer is a real eye-opener for them.”

Superstitious when it comes to basketball — Turgeon sits in a particular chair in the locker room before each game and likes to begin his press conferences by fielding questions from the same reporter — the coach instructed his staff to eschew tradition and wear white Under Armour tennis shoes during the team’s game at Miami on Feb. 1 in support of Lederer.

Doctors still haven’t determined the exact type of tumor he has, and a combination of radiation and chemotherapy treatment will be required in the coming weeks. Still, Lederer has been a constant at practice, even traveling with the team to Clemson for its game Tuesday.

“A lot of times,” forward James Padgett said, “we’ll say to go out there and play for Zach.”

Looking a reporter straight in the eyes last week, Lederer said he’ll tell anyone he’s not scared. He’ll say to them that life is a gift and something worth fighting for. He’ll add that this battle will take 100 percent of him, nothing less.

But Zachary Lederer also vows that he will overcome this latest obstacle. And he’ll say it with a conviction that makes you want to believe him.

“I told all my friends, ‘What an opportunity, I’m not even 19 years old and I’m going to show the world how strong I am for the second time,'” Lederer said. “Living the dream. It all goes back to that.”