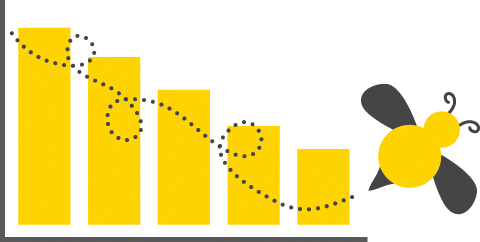 Colony collapse disorder, a trend that has led to startling declines in bee populations worldwide, may be partly caused by common pesticides and fungicides, university scientists found in a study published July 24. Even traces of the crop-dusting chemicals can make bees more susceptible to a dangerous stomach infection.

Colony collapse disorder, a trend that has led to startling declines in bee populations worldwide, may be partly caused by common pesticides and fungicides, university scientists found in a study published July 24. Even traces of the crop-dusting chemicals can make bees more susceptible to a dangerous stomach infection.

Scientists from this university and other research centers may have discovered that what has been killing bees has been under their fingertips all along.

A study released July 24 suggests common pesticides and fungicides used by farmers may be more harmful to bees than originally thought and could be involved in what’s been dubbed colony collapse disorder, a phenomenon that causes entire populations to disappear.

Starting in 2007, scientists led by Jeffery Pettis, research leader at the U.S. Agriculture Department’s Bee Research Laboratory, visited colonies across the country, including ones in this state, Massachusetts and North Carolina, to study these possibly toxic effects. Their study focuses on fieldwork and is one of the first of its kind.

“We wanted to know what the real-world exposure was,” said Dennis vanEngelsdorp, a professor at this university and senior author of the study. “We wanted to see what bees were naturally exposed to and see what happened. So it’s a very dirty experiment.”

The research team took samples of pollen from crops, including watermelon and blueberry, during growing seasons and measured the amount and type of pesticides collected in each sample. Most of the pesticides are designed to kill fungi and harmful pests while leaving bees to their work, but scientists were surprised to find that feeding bees were threatened even by traces of the supposedly harmless chemicals.

When the scientists fed bees the pollen with traces of fungicide, they discovered the insects were much more susceptible to Nosema, a deadly infection that attacks bees’ stomach linings and is believed to contribute to colony collapse disorder.

The study also revealed that bees are collecting less pollen from crops and more from other plants, such as flowers, a discovery Roger Williams, president of the Central Maryland Beekeepers Association, believes could shrink the beekeeping community.

“There might be those in the field that think they don’t really need honey bees because they are not pollinating their crops as well as we thought,” Williams said. “We may then lose, to some degree, this political alliance.” Williams said that had already occurred to one of his friends.

The discovery has left experts in the field with decisions to make about how to move forward, and some are calling for changes to be made on a national level to preserve the beekeeping and honey industries.

“The study points out the need to look into sublethal effects of pesticides,” said Wayne Esaias, president of the Maryland State Beekeepers Association. “This is one of the areas the [Environmental Protection Agency] does not require [review in] to receive a license.”

In order to use certain pesticides, the EPA requires farmers to have a license or be supervised by someone with a license. The license ensures the qualified farmer is knowledgeable on how to safely apply pesticides but doesn’t address the damaging nature of those pesticides.

Esaias recommended changes in EPA standards to better protect bee populations, which are in a national decline.

Changing labels to include more information about the effects could make a difference as well, said vanEngelsdorp.

“You’re not going to get rid of pesticides and just replace it,” he said. “You then have to find out what’s wrong with its replacement and what the effects of that are.”

The team isn’t quite finished with its research, vanEngelsdorp said. For one thing, he hopes to figure out exactly why the fungicide is harmful to the bees   — a mystery to the team — and they also want to study the effects pesticides have on the pollen’s nutritional values.