McKeldin Library receives a $500,000-plus makeover 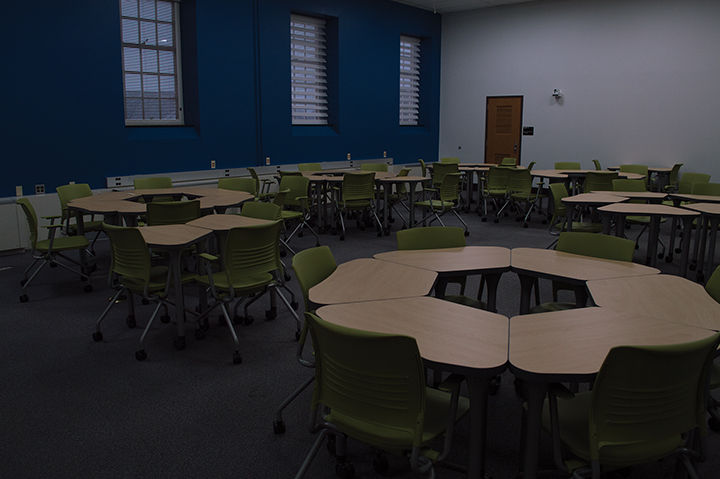 One of the new upper-level classrooms in McKeldin Library.

One of the new upper-level classrooms in McKeldin Library.

In an effort to provide a more inviting and attractive space conducive to both group and individual study time, McKeldin Library has implemented hundreds of thousands of dollars’ worth of upgrades and renovations this summer, library administrators said.

Completed thus far are two of the three main classrooms on the sixth floor and one on the seventh floor, said David Rivard, the University of Maryland Libraries assistant dean for administrative services. Funding for these projects came from library technology fees, library plant reserve funds and campus facilities management, he said.

The sixth floor classrooms, 6103 and 6107 — which previously contained fixed desks and desktop computers — “changed from static to mobile class space[s],” he said, and now allow students to shift tables around and plug in their own computers or loaned library laptops.

“It’s quite a different look now,” Rivard said, noting an estimated $163,000 was funneled into the completion of the two rooms.

Room 7121, which is typically used for staff events and group meetings, also received a new, reconfigurable layout and upgraded furniture for an estimated $30,000, Rivard said. This space is also made available to students during peak study times.

The building also has an upgraded fire alarm and safety system, which includes the ability to make live public-service announcements and allows for more effective communication in the event of emergencies. Those additions cost about $300,000, Rivard said.

“This is a very big job, since they were pulling cables all through the building,” Rivard said. “We’ve never had live announcements in McKeldin before.”

Also new to this library will be the layout and decor of the fourth floor’s reading room, a $350,000 to $400,000 undertaking which Rivard said he expects to be completed by November. The space will have upgraded carpeting, lighting, furniture, floor outlets and task lamps, he said.

“The reading room is something that’s been a labor of love for many of us,” Rivard said. “It’s something we want to be an iconic location for groups, as well as our faculty and staff.”

Many staff members said they eagerly anticipate McKeldin’s upgrades and consider these renovations both productive and necessary.

“We’re trying to be the place where people can learn and play with more stuff,” said Carleton Jackson, Library Media Services director. “We want to learn from the people using [McKeldin] too.”

Social media has been a key component of gauging student needs and concerns, Jackson said, adding that providing space for small groups to assemble is a high priority.

“I wouldn’t want to wall up this whole place, but I think sound-proofing some rooms is important,” Jackson said. “That takes a lot of money, but that’s the goal — having a place for individuals and groups.”

The limited budget has posed some obstacles, and led to the postponement of the first-floor renovations until February, Jackson said. He added that those renovations should hopefully be completed by next summer.

“We’re trying to open the front entrance up, change the flooring and lighting, and centralize the information services desk so that it’s the first thing you see when you walk in,” Rivard said. “We want to make it more inspired and welcoming.”

But many students, such as freshman Nita Gegeshidze, already feel at home in this library and find the space convenient and welcoming as is.

Others, such as Sarah Cooney, a freshman biology major, also disagreed with the idea of McKeldin requiring large-scale upgrades.

“I like how it’s pretty much all open [space] here,” Cooney said. “I know at some other colleges they have really clear directories though, which I think would be helpful here too.”

“McKeldin has a lot in it, but it can be hard see through its elderly condition,” Rivard said. “We want it to be a space that’s bright and inviting.”