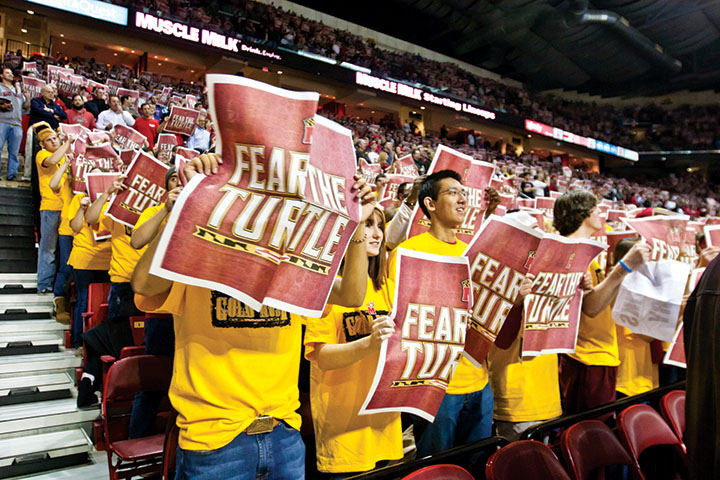 A few dozen students paced around Stamp Student Union yesterday afternoon, peering into the windows of a news conference they’d heard about only a few hours earlier — one laptop streamed the event just feet from where university President Wallace Loh, and coaches Randy Edsall and Mark Turgeon stood.

The students wanted to know the same thing — why they’d been blindsided in losing their rivalries, traditions and identities as members of an ACC school.

“Yes, this makes more sense financially, but at least consult us,” said Drew Needham, a senior biology major. “Don’t go sneaking around behind our backs.”

This university, a founding member of the ACC, will join the Big Ten conference in 2014, Loh announced yesterday. The move does not come without its costs — the ACC’s exit fee is a steep $50 million, and the university will likely pay a high amount whether the Big Ten helps shoulder the cost or the university negotiates a lower fee, both of which are reported possibilities. In a few years’ time, the athletic department will receive an equal share of the conference’s annual revenue — which totals about $24 million per school this fiscal year.

But students are lamenting the losses they’ll feel far before the university reaps the benefits of Big Ten membership.

“Can you imagine not having the Duke game every year? It’s a huge draw,” said Noah Niederhoffer, a junior Jewish studies and journalism major. “Yeah, it’s a great long-term solution because it’s a wealthier conference. But we have a tradition and history with the teams in the ACC.”

With the athletic department’s tumultuous finances, including eliminating seven teams this summer to create a more sustainable funding model, many former Terps athletes have been watching the school closely. When Renaldo Nehemiah, a holder of three NCAA track and field titles with this university, heard the news, his first thought was, “Say it ain’t so.”

“We were proudly part of the ACC,” said Nehemiah, a world record-setting hurdler and former NFL player. “There was nail-biting experiences and highs and lows and the drama and the familiar faces of the coaches and players. Now we have to learn a whole new mentality.”

The university is sacrificing those traditions, built over more than 50 years, for financial stability, said Jared Stein, a sophomore enrolled in letters and sciences.

“We’re leaving a conference that we helped start,” he said.

The delivery of the news was most frustrating, many said.

“Someone leaked something to ESPN, then out of nowhere there’s this press conference that students can’t even get into,” Stein said. “I’m not blaming, though. It would be impractical for this to be an open process.”

Administrators knew how to handle and prepare for the response to their decision, said Ryan Largent, a senior government and politics major.

“This was executed politically — they pushed it to the weekend with no print days so that when they announce it on Monday no one can protest it,” Largent said. “They knew it was going to be controversial.”

But from a financial standpoint, some students argued, the decision has its merits.

“Maybe I’m biased because I came from the Big Ten,” said Julia Madden, a sophomore economics major. “We’re putting all of our eggs in one basket, but it’s a basket of money.”

And for sports that faced the chopping block last year, the prospect of more money means a possible comeback, Nehemiah said.

“I’m sure the viability of bringing some of the other programs they were leaving has to do with … the funding mechanism the Big Ten provides,” he said.

However, the ACC remains the place for competition for many of the smaller athletic programs at this university, said former Terps lacrosse player Brian Dougherty. The Big Ten does not sponsor lacrosse, consistently one of the university’s strongest programs.

“I’ve always liked the fact that it was an ACC school, but at the same time, with all this realignment going on, I couldn’t even tell you who was in the ACC anymore,” said Dougherty, a 2008 inductee to the university’s Athletic Hall of Fame. “It’s not the same as it was. … Lacrosse would definitely be on the back burner. I’d hope they’d go in there with an idea that they’d add programs in the Big Ten, but I don’t think that’s going to happen.”

While nothing will change until 2014, several students said they already feel less a part of the ACC.

“Next year, our games will sell out because everyone will want to see these rivalries before they’re gone,” said Abby Bjork, a junior English major. “We’ve been playing these teams for 60 years and next year is our last chance to catch them.”